On April 17 2011, an unknown number of Bengali Settlers went on a rampage in the Chittagong Hill Tracts of Bangladesh, burning down at least 95 houses in six Jumma Villages. More than fifty people were injured during the attack, four were killed, and at least twenty more are still missing.

According to an initial report from PCJSS (Parbatya Chattagram Jana Samhati Samiti), a group of Jummas had attempted to stop some settlers from illegally clearing bushes and planting crops for themselves on the Jumma’s lands. 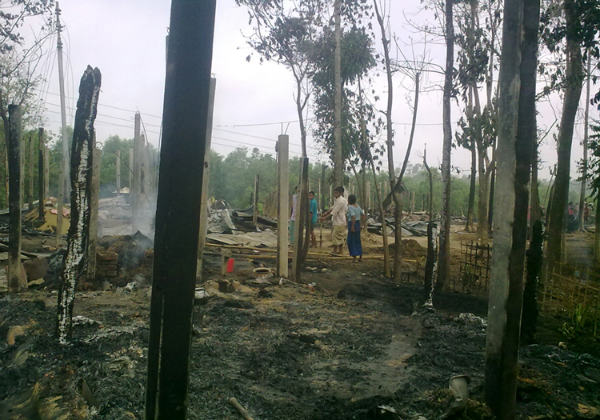 The settlers started clearing the bushes “on April 14 2011, the first day of the Bengali year, when most of the Jumma People were engaged in enjoying the Year End Festival, the Bizu or Sangrai,” reported PCJSS. The Jumma had asked the settlers to stop what they were doing and proceeded to inform local Bangladeshi authorities. 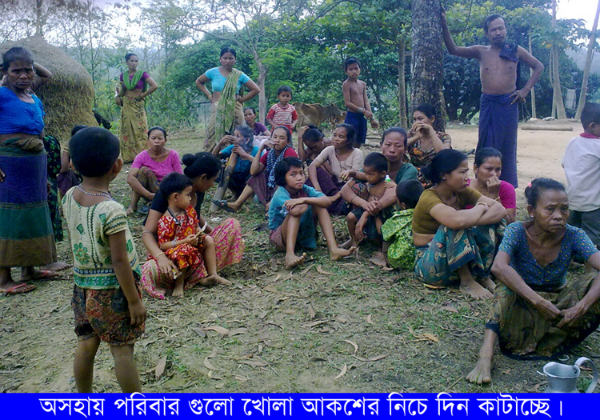 “[On the morning of 17 April 2011] the settlers continued clearing bushes and making temporary makeshifts and at the same time fell upon the Jumma people, who finding no other alternatives were compelled to resist [the settlers]. Consequently about 10 Jumma persons were injured among whom 2 persons reported died and 7 settlers were precariously injured among whom 1-3 may likely die,” said PCJSS. 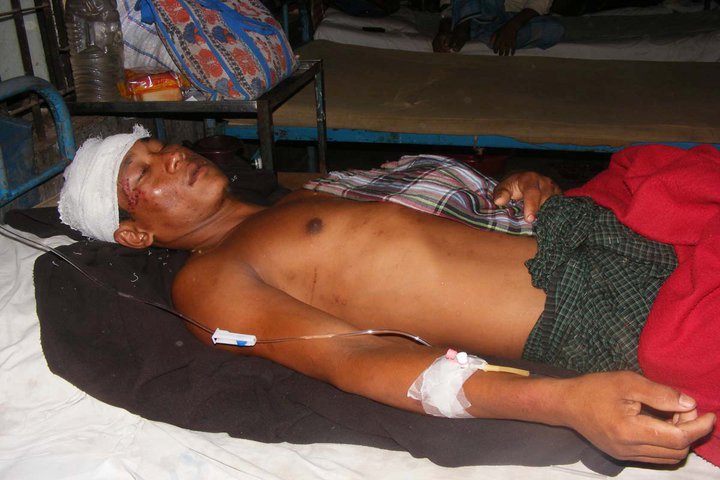 In response to the Jumma’s actions, “the settlers, under the protection of Army [personnel] from the Guimara brigade started attacks upon Jumma People of Rimaram Para and Shankhola Para of Toikarma Mouza under Ramgarh upazila in Khagrachari hill district.” Several Jumma houses were then looted and set ablaze.

Violence soon spread to other nearby areas, with the settlers hunting Jummas, pulling over vehicles, looting their shops and burning down even more houses.

According to the very latest report (April 19) from the United Peoples’ Democratic Front (UPDF) one Buddhist temple and 95 houses were burnt, 4 shops were looted, about 50 people were injured and 4 people have been confirmed missing.

At least one other Jumma was killed during the April 17 attack. According to CHT News Update, Mr. Repruchai Marma (85) and a Child of Boropilak Shankhola para were believed to have been burnt to death on April 17. Today, April 20, Repruchai’s daughter, Mrs. Painhihla Marma, encountered what she believes to be her father’s remains. 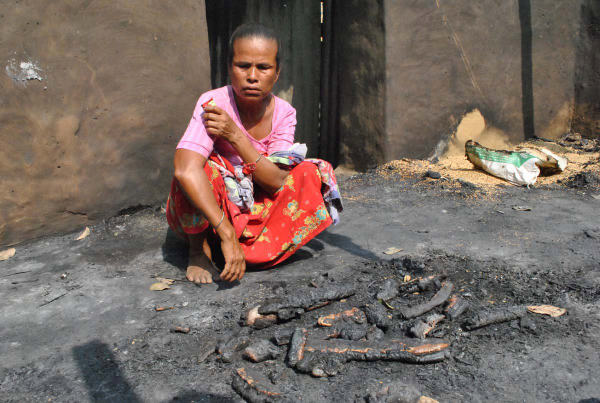 “This deadly violence could have been prevented if the authorities had taken appropriate action in time,” Amnesty International said today. “The failure to prevent these clashes suggests Bangladeshi authorities aren’t following through on their responsibility to uphold the peace accord and prevent the further escalation of violence on indigenous lands.”

In 1997, Jumma leaders signed the “CHT Peace Accord” with the government, bringing a welcomed end to twenty years of atrocities against the Indigenous Population. The Peace Accord brought in basic protections for the Jumma, as well as the right to safe repatriation of refugees, regional autonomy, the withdrawal of military camps, and the return of illegally occupied lands.

While there has been some attempt to implement the accord, to date the government has largely failed to enact most of its provisions, a fact made clear by this latest attack. Since the accord was signed in 1997, there have been dozens–if not hundreds–of other attacks against the Jumma.

In light of the most recent attack, Amnesty International is urging the government of Bangladesh to renew its peace efforts and “implement key provisions of the peace accord, which include the establishment of an effective land commission to resolve disputes in the Jumma’s ancestral lands, and the withdrawal of some 400 temporary army camps in the area, which Jumma inhabitants say frequently allow the advance of Bengali settlers onto indigenous land, rather than preventing it.”

Amnesty International also urges the Jumma not to take matters into their own hands (thus giving the settlers reason to lash out) and the government to ensure that an inquiry into the attacks is conducted “in a thorough, independent and impartial manner to determine what happened. The authorities must bring those accused of killing or injuring others, or destroying their property to justice.”