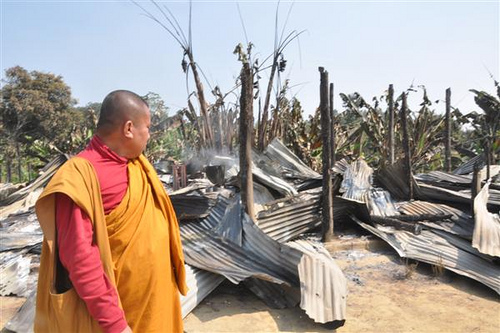 Eight people are dead and more than two dozen have been injured after the Bangladesh military, on Feb. 20, 2010, opened fire on a group of Indigenous Jumma villagers in the Chittagong Hill Tracts (CHT) of Bangladesh.

Four villages sponsored by the United Nations were also burned to the ground by a group Bengali settlers who began to illegally invade the Jumma’s land on Feb. 19. The military was deployed to specifically defend the settlers.

The Parbatya Chattagram Jana Samhati Samiti (PCJSS), a political organization that represents the entire Jumma population, provides this report on the events surrounding what has been termed a “massacre.”

B. Beginning of the incident

Again at night around 8.30 pm hundreds of Bengali settlers led by leaders of so-called Sama Odhikar Andolon under full protection by a group of army from Baghaihat zone of 8 Bir Bengal gathered at Gangaram Duar area and started to set fire on the houses of Jumma villages. At that time, at least 35 houses including 7 shops, a church and a UNDP-run village centre, in three Jumma villages of Gangaram Duar, Chaminichara and Baluchara were burnt down. Jumma villagers alleged that Bengali settlers also looted the valuables while they were burning the houses. The villagers fled into the jungle when the attack took place.

After the first attack, the villagers returned to their villages the next morning and gathered in Gangaram to protest it. The Bengali settlers returned in the morning on 20 February 2010 equipped with sharp weapons, machetes and sticks.

Further, at around 10.00 am on 20 February 2010 tension mounted throughout the area while the army and Bengali settlers ordered the Jumma villagers to leave the area, but they refused to comply. At around 10.00 am the army started to beat the Jumma indiscriminately. One Jumma villager chopped an army named Sergeant Rezaul Karim while beating him brutally and then the army fired leaving him spot dead. Following this, the army opened fire into the Jumma villagers indiscriminately without any sort of provocation, leaving at least 6 dead and 25 wounded. They army also arrested three persons from there.

Since the start of firing, Bengali settlers with the help of army set fire on Jumma houses at Hajachara, Guchchha Gram, Balughat, Simanachhara, Baipaichhara, Suranganala, Kerekkaba Retkaba, Jarulchhari, Dane Bhaibachhara, Bame Bhaibachhara, MSF Para and Purbapara villages. It is reported that at least another 160 houses were torched at that time. Bengali settlers also burnt Banani Bana Vihar, a Buddhist temple. The monk of the vihara Ven. Purnabas Bhikkhu, fled the temple without taking meal. One statue of Buddha was looted and another one which was given by Thai government was looted. As they continued the arson attacks, the indigenous community began resisting them. During this resistance, six indigenous persons were injured.

It is still not clear how many Jumma villagers were killed in the attacks. However, five of the dead were identified. They are-

Some of the injured are-

It is learnt that the dead body of Buddhabati Chakma was brought at Baghaichari police station for postmortem. But dead bodies of other deceased are yet to be recovered, as the entire area is now under the control of the settlers and army vigilance. On 20 February 2010 afternoon the army imposed section 144 in the area to prevent Jumma villagers from taking out protest demonstrations.

Bangladesh military forces undertook plan to settle down the infiltrated Bengali families along the roadsides of Sajek road from Baghaichari to Gangaram Mukh in 2005. It is also mentionable that thousands of indigenous Jumma families have been living in this area for decades long. Hence, Jumma villagers of these areas have been protesting against this illegal settlement programme. Despites the protesting, in 2008 Bengali settlers illegally constructed some houses at Gangaram area on the land owned by Jumma villagers. At a stage on 20 April 2008 the Bengali settlers with the direct support of army of Baghaihat zone attacked on the 7 villages of indigenous Jumma peoples and at least 76 houses of indigenous villagers were completely burnt to ashes.

Again, since starting of January 2010, Bengali settlers with the support of Baghaihat army zone resumed expansion of their settlement in Sajek area under Baghaichari upazila in Rangamati district. A number of houses have already been erected by the Bengali settlers occupying Jumma villagers’ land.

The villagers, under the banner of Sajek Bhumi Rakkha Committee, submitted a memorandum to the Baghaichhari UNO on 10 January 2010 with an ultimatum of 16 January 2010 to return them their lands. As the deadline expired without any fruitful result on 16 January, Jumma villagers started their agitation and started to boycott Baghaihat market from 18 January 2010. On the other, on 25 January 2010 the PCJSS sent a letter to the Home Minister with copy to State Minister of CHT Affairs Ministry and other concerned government authorities demanding to stop settlement prgramme and to withdraw Bengali settlers from Baghaihat area. However, government did not take any measure in this regard.

It is learnt that Bengali settlers and army staged mocks to conceal real situation of the attack and to divert the incident to other direction. As part of this mock, Bengali settlers set fire on their few houses which were almost abandoned. Even, army also played a gunfight mock. At a press conference at Rangamati Reporters Unity, the Parbatya Bangalee Chatra Parishad also protested the incident and blamed indigenous people for it. They declared the Chittagong Hill Tracts Commission unwanted in CHT and blamed it for working in favour of the indigenous people.

It is reported that most of news media both electronic and press primarily reported fabricated news. They reported that tribal miscreants fired first, clash started since tribal ablaze settlers’ houses, tribal villagers attached Bengali settlers etc. For example, the Daily Star in its internet edition on 20 February mentioned the headline of news as “Criminal killed in gunfight with security forces in Rangamati”. However, it replaced later with “2 indigenous men killed as troops open fire in Rangamati”. The Prothom Alo stated it as firing between Paharis and Bangalis. Most of the electronic media aired news in favour of Bengali settlers. Most of the media reflected statement of military authority as well as administration that went against the Jumma peoples.

Processions have been brought in Rangamati, Khagrachari and Dhaka protesting against the attack. At 11.00 am on 20 February 2010 PCJSS brought out procession in Rangamati. PCJSS claimed that Bengali settlers led by so-called Sama Odhikar Andolon (a fanatic organisation of Bengali settlers) and Parbatya Bangali Chhatra Parishad torched the houses of the tribal people in a pre-planned way. PCJSS demanded judicial investigation of the incident, immediate arrest of the people responsible for the incident and compensation for the victims and warned of tougher agitation programmes if their demand is not met.

On the other, Pahari Chatra Parishad (Hill Students Council) also brought out procession at Dhaka University campus in Dhaka.

Tension is going on at Baghaihat area of Sajek union and upazila headquarters under Baghaichari upazila. With this circumstance, please write letter to the government of Bangladesh demanding the following issues-

1) To conduct judicial investigation of the incident and to send a parliamentary team to enquiry the incident;

2) To immediate arrest the Bengali settlers and military personnel responsible for the incident and to provide compensation for the victims of Jumma peoples;

4) To close Baghaihat zone soon and to withdraw all temporary camps including de facto military rule ‘Operation Uttoran’ as per CHT Accord;

5) To implement the CHT Accord and to declare roadmap with timeframe for speedy and proper implementation of CHT Accord.

Please write to the authorities of Bangladesh Government