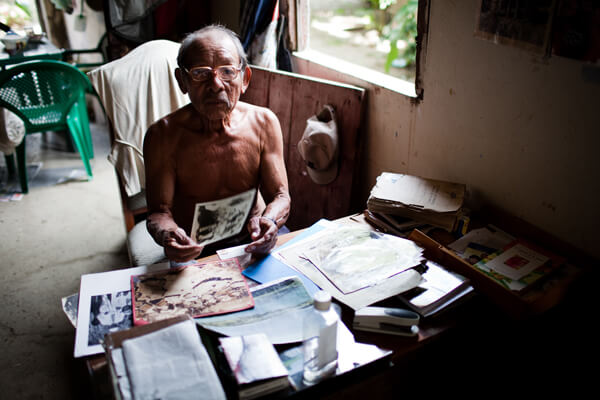 Balu Wala, or the Kuna ‘good life’: how one indigenous tribe is passing on its traditions

Balancing the old world and the new, the Kuna people keep their heritage intact
Don Jesús Smith looks through old photos at the desk in his home on Ustupu Island. Don Jesús is the grandson of the Kuna revolutionary leader, Nele Kantule, and an outspoken advocate and teacher who is trying to ensure that young Kuna boys and girls learn about their culture. Photo credit: Bear Guerra
Support our journalism. Become a Patron!

Jesús Smith is sitting at his old wooden desk facing the entrance to his house. He’s hunched over, shirtless, and wearing his chunky reading glasses while writing copious notes by hand — a favorite pastime. When he sees the profile of one of his students, Julio, walking past his doorway, he yells, “Hey! I’ll see you in class tomorrow!”

At 85 years old, Don Jesús is finally realizing one of his lifelong dreams: to formally teach Kuna, also known as Guna*, traditions to the next generation of boys and girls. Every week, he illustrates and jots down definitions of dozens of artifacts, plants, and customs that have been integral parts of his culture for hundreds of years. By putting them down on paper, he’s preparing for his next weekly class, but also, keeping a record before he forgets. He’s doing this to make sure his people don’t forget as well.

Don Jesús Smith looks through old photos at the desk in his home on Ustupu Island. Don Jesús is the grandson of the Kuna revolutionary leader, Nele Kantule, and an outspoken advocate and teacher who is trying to ensure that young Kuna boys and girls learn about their culture. Photo credit: Bear Guerra

The Kuna people have passed down those traditions, stories, and their language orally, from one generation to the next. So as he puts them on paper, Don Jesús often runs into the challenge of sorting history from myth and fact from fiction, in additon to deciphering how it all is relevant to what it means to be Kuna today, in a world much different than that of his forebears.

The Kuna culture precedes the arrival of the Spanish in the 15th century. Originally from Central and Western Colombia, they settled in their current home along the Caribbean coast of Panama over two hundred years ago, escaping assimilation and possible extermination at the hands of Spanish invaders and other indigenous groups.

“Our great-grandparents got displaced,” explains Smith. “So they started looking for their promised land. They were looking for not just a place to live and to grow food, but also a place where they could conserve the plants they depended on, their traditions, and language.”

They found their new home in what the early Panamanian government called the San Blas Islands, an idyllic location — at one time a hideout for pirates — just a mile away from a lush mainland forest. This old-growth forest, still intact, occupies some 323,000 hectares (1,250 square miles) along the Caribbean coast. 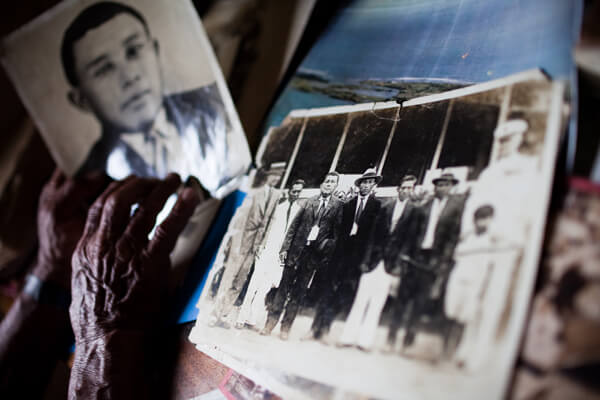 A photo shows Don Jesús Smith’s grandfather, Nele Kantule (left). Kantule led the Kuna revolution against the Panamanian government in 1925, and won the Kuna’s exceptional sovereignty and land rights as an indigenous group. He also stressed the preservation of Kuna culture and language, notions that continue to inspire Don Jesús in his efforts today. Photo credit: Bear Guerra.

According to Don Jesús, his ancestors knew “how to face change.” So rather than move into the mainland, where they’d have to contend with mosquitoes, mangroves, difficult terrain, and wild animals, the Kuna decided to settle on almost forty small islands peppering what today is the eastern Caribbean coast of Panama. This way they would enjoy milder weather and continue to live off the sea, catching lobster and octopus, but also practicing subsistence farming on the edges of the mainland forest. This is still the Kuna way of life today: one that depends on nature, its resources, and its cycles, while trying to preserve Balu Wala, or a good life.

Although these concepts about nature are shared by a lot of indigenous groups around the world, the Kuna are arguably distinct in their successes at saving it to date.

“The Kuna’s views of nature may not be all that unique,” says biologist Jorge Ventocilla, who works with the Smithsonian Tropical Research Institute in Panama City. “But what’s unique is they have their land and their forest, and they have defended it against all kinds of encroachment. In one way or another, they’ve managed to preserve it.”

Early on a Thursday afternoon this past July, at a time when most families are in the middle of their post-lunch nap or just hiding from the midday sun, Don Jesús took the ten minute walk from his home to the Olomaili Museum, which he oversees. The building’s straw roof had been damaged in a recent storm, and Don Jesús, at just over five feet in stature, picked up a broom nearly as tall as he was to clean up the debris on the floor. Then, he turned to the museum’s collection, also covered in dust. 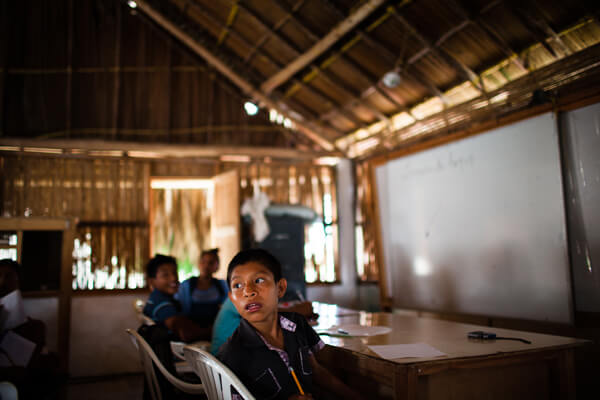 “This shows how some nuts that are harvested in the forest are used to help a woman during childbirth,” says Don Jesús, pointing to a somewhat crude crayon drawing, featuring a woman drinking from a cup full of nut oil just as she gives birth. Next to the drawing are a couple of maracas on a table, made out of empty, round gourds and filled with seeds. “Mothers play these for their babies, while they rock them in a hammock and get them to sleep.”

He goes on, pointing out drawings and artifacts along the walls of the museum, where he’s painstakingly catalogued all sorts of objects, tools, and utensils, most of them sourced from the Kuna’s mainland forest — from bundles of herbs to animal bones to talismans made out of wood, and even some river rocks that are believed to bring down fever.

When the students finally shuffle in, they sit in front of a whiteboard facing their octogenarian teacher, nearly shouting at him to start the class, “Tell us the story of Kuna creation!” Don Jesús is overjoyed, and clearly, in his element.

He begins by telling them about their deities, Pab Dummat (Big Father) and Nan Dummat (Big Mother); about how Mother Earth, Nabguana, gave birth to humanity after the Earth finished forming, and how all plants, flowers, and animals were subsequently designed for the benefit of humans. This is why the Kuna are perennially thankful and subservient to Nabguana, Don Jesús tells them.

This narrative is one that Kuna kids have heard or sung themselves dozens of times. It’s not only key to their indigenous identity, but it is also the essence of the Kuna people’s conservation philosophy: Nabguana is sacred, and offers many resources to be used, but not abused.

Don Jesús was raised with these principles, as passed down to him by his visionary grandfather, Nele Kantule, a Kuna revolutionary who led his people towards sovereignty from the Panamanian state in 1925. Both Kantule and Don Jesús also served as sahilas, or wise elders, a top honor devoted to those charged with the preservation of Kuna culture, traditions, and philosophy, much of which concerns the environment.

“In our culture, we believe the universe, and, as part of that, planet Earth, are interconnected — each part of the whole is equally important,” says Don Jesús. “If we removed the lungs, or the heart, or the brain from a human body, could it still function? Nabguana is the same. If you exploit its mineral kingdom, or its natural resources, the whole thing eventually collapses. It would spell the end of our planet.” 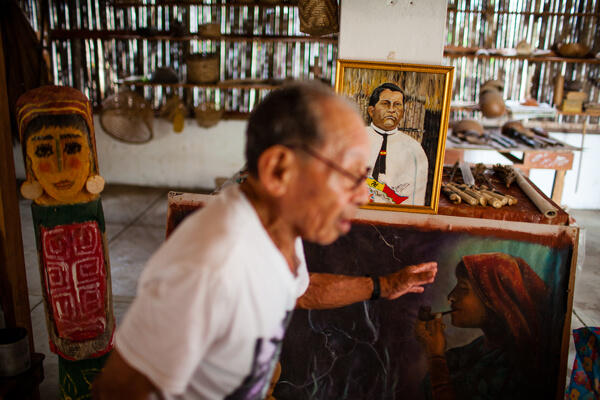 Don Jesús Smith stands in front of a painting of his grandfather, Kuna revolutionary hero Nele Kantule, while talking to students about artifacts in the Olomaili Museum on Ustupu Island. Photo credit: Bear Guerra.

Environmental conservation is such an important concept for the Kuna, in fact, that clearing primary forests indiscriminately is believed to upset the spirits living in them, unleashing a wave of disease against those responsible. Slash and burn deforestation, for instance, is frowned upon, and raising cattle is forbidden. Forests are also home to dozens of known medicinal plants that are still used by the Kuna to cure a range of illnesses and supplement their diet. An inaduled, or traditional doctor, is a respected authority among the Kuna, believed to “receive advice from plants” in order to heal the sick.

“Traditional medicine, according to our indigenous vision, is a holistic science where we see the interaction of physical, biological, social, cultural, environmental, spiritual, and territorial elements,” wrote Bernal Damián Castillo in a 2005 report, a Kuna anthropologist at the University of Costa Rica, by way of explaining the complex view and use of plants by his people. “The protection of medicinal plants and other natural resources, sacred spaces, and ecosystems are a collective priority for the Kuna. No one can claim their individual right over them.”

Over recent years, there has been greater interest by researchers in Panama and beyond, to study these medicinal plants. Much of it is led by Kuna scientists themselves–like Castillo, who began pursuing careers in biology, anthropology, and engineering in the 1980s–motivated by greater access to higher education and by a desire to preserve their culture and their land.

“What little we’ve studied of Kuna botany and fauna tells us there’s a lot more we need to do in the area,” says Heraclio Herrera, one of the first Kunas to get a degree in biology in Panama, and a contributor to PEMASKY, Proyecto de Manejo de Áreas Silvestres de Kuna Yala, or the Management Project for the Wildlands of Kuna Yala, a research project that aimed to study and catalog Kuna Yala’s biodiversity. “Since 1990, we’ve had a growing number of Kuna involved in research, making contributions to conservation efforts there — they also have a unique sensibility of conservation, rooted in our culture,” he says.

A majority of those Kuna in the sciences, says Herrera, have gone on to teach in classrooms back in their communities through a new “intercultural” model of education.

Back on Ustupu Island, Don Jesús may not have scientific training — he, like many Kuna men of his generation, worked in the Panama Canal Zone for many years. But he is eager to draw more students to his escuelita, or little school, where he speaks to kids in their Kuna language, and offers lessons on the local ecosystems and history — lessons that were ingrained in him when he was their age, many years ago.

He is encouraged to see his young students’ interest in his classes. “They come looking for me at home, asking me questions, and they often stay after class to chat with me about Kuna traditions,” says Don Jesús. His grandfather Nele Kantule had argued for the importance of bilingual (Kuna and Spanish) and intercultural education as long ago as 1915. And Don Jesús, as he preps for his weekly class and keeps cataloging artifacts at the Olomaili Museum, continues to work to see his grandfather’s dream become a reality.