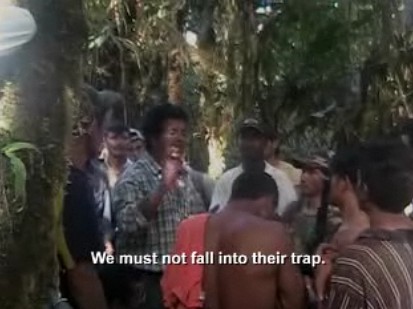 Under Rich Earth (Bajo Suelos Ricos) tells the story of a small agrarian town in northern Ecuador, and their struggle to defend the land against the Canadian mining company Ascendant Copper.

Confronted with the prospect of eviction, the town of Junin came together and risked their lives to stop the mining company.

In 2006 Ascendant Copper sent paramilitary troops to terrify the town so they would give up their land. But the town didn’t simply cower away as Ascendant had hoped. Instead, they charged out and caught 56 of the armed men, who were shooting bullets into the air and pepper spray into the faces of anyone that went near them.

Under Rich Earth, which resembles the film, Kanehsatake: 270 Years of Resistance, reconstructs the events of this day, which ultimately led to victory for the People of Junin.

Above and beyond this day, Under Rich Earth is an “indictment of governmental largesse, environmental exploitation and corporate greed,” says Jesse Wente.

It is also a reminder that, despite the tactics of industry and government, which are so often designed to humiliate, divide, compromise and terrorize us into submission — the reward for standing up and doing what is right is always greater than the cost of accepting the unacceptable.