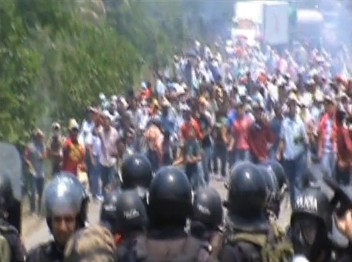 Bajo Aguan: The Clamor for Land

One of the most repressive and violent regions of Honduras, since the 2009 coup, is the Lower Aguan river region of northern Honduras, where the country’s largest and wealthiest land-owner, Miguel Facusse (also a direct supporter of the 2009 military coup), is using extreme levels of repression – often supported by the military and police – to forcibly and illegally evict campesino communities from their lands, so as to increase his cultivation of African Palm trees and sugar-cane for the production and sale of “green energy” (bio-diesel and ethanol fuels) to global energy markets. Over 80 campesinos have been assassinated in this region alone.

This short film by Alba sud and Rel-UITA will introduce you to this ongoing land conflict, in Bajo Aguán, Honduras.