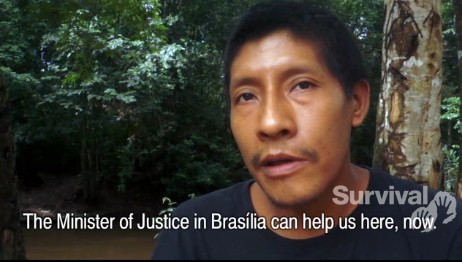 The Awa Peoples have issued another appeal to the Brazilian government urging the immediate eviction of loggers, ranchers and settlers who have illegally occupied the Awa’s forest homelands northeast of the country.

According to Survival International, a federal judge previously ruled that the government must remove the invaders by the end of March 2013; however, “not a single person has yet been evicted”.

The Awá are becoming increasingly desperate as the illegal loggers continue to close in on them and settlers continue to encroach on their territory, says Survival.

Another Awá man stated, “For a long time, we have been asking for the invaders to be evicted. It has to happen now. They must be removed. The loggers have already destroyed many areas; we refuse to lose all our land.”

A government survey estimates there could be “up to 4,500 invaders, ranchers, loggers and settlers” occupying just one of the Awa’s four territories, whose own total population stands at just over 450.

The Awa face many different threats as a result of the invasion and destruction of their territory. For one, there is a very high risk of confrontation should the Awa cross paths with any of the invaders. Over the last seven months there have been two such documented attacks: In September 2012, an Awá man was left for dead after being brutally attacked by a group of loggers; and in January 2013, an Awá girl was reportedly ‘burned alive’ following another attack. Feeling threatened by the possibility of further violence, many Awa now avoid entering the forest to hunt and gather food.

The pressure on the Awa’s subsistence economy is also increasing as more and more trees are felled.

Survival’s director Stephen Corry commented, “It is a scandal that the Awá have been driven to such desperation. As they hear the chainsaws day and night in their forest, it seems to them that the judge’s ruling and the government’s promises have been forgotten. The Awá need action, now.”

There are also a number of Awa who live in voluntary isolation. They face the same risk of violence in addition to the risk of being exposed to diseases for which they have no immunity. Every man, woman, and child living in isolation could die from something as simple as a handshake.