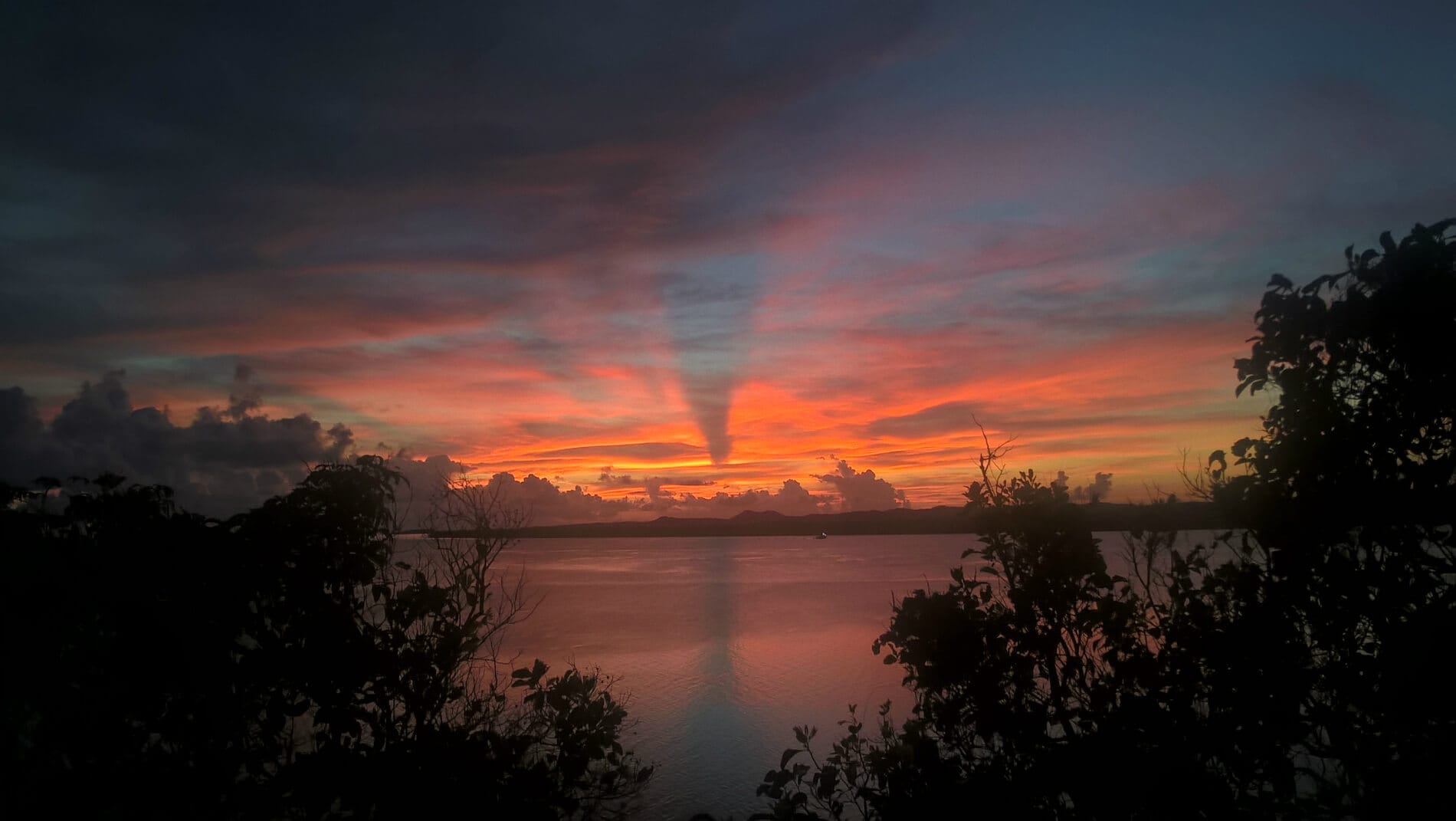 The complaint will be the first legal action worldwide brought by inhabitants of low-lying islands against a nation state, lawyers say
Sunrise on the Torres Strait Islands. Photo: Ray Hicks 1/Wikimedia (CC)
Support our journalism. Become a Patron!

KUALA LUMPUR – A group of indigenous people will file an unprecedented legal complaint against Australia on Monday, lawyers involved in the action said, accusing the government of breaching their human rights by falling short on its Paris climate accord pledges.

Eight residents of the Torres Strait Islands, a group of more than 270 low-lying islands between Australia and Papua New Guinea, are set to lodge a complaint with the United Nations Human Rights Committee in Geneva, Switzerland.

“These are some of the most climate-vulnerable villages and islands in the world,” said Sophie Marjanac, one of nine lawyers involved in the case. “They are very exposed.”

“The science is really stark for these communities about what the future holds – they need serious assistance to adapt and to remain on their islands because … they’re already experiencing regular inundations,” she added.

Australia – one of the world’s largest carbon emitters per capita because of its reliance on coal-fired power plants – is among 185 countries that have ratified the Paris Agreement to tackle global warming.

Under the pact, Canberra has pledged to reduce greenhouse gas emissions 26 to 28 percent below 2005 levels by 2030.

But last year, the government stripped requirements for cutting emissions from its centrepiece energy policy in the face of political opposition.

In January, the Organization for Economic Co-operation and Development warned Australia needed to cut carbon emissions more sharply to meet its Paris accord target.

The Torres Strait Islands are located off the northern tip of Queensland, with about 18 of them inhabited by a population of 7,000 people who rely heavily on fishing.

The U.N. complaint, which lawyers said could take up to three years to be ruled on, would be the first climate change litigation brought against the Australian federal government based on human rights, said environmental campaign group ClientEarth, which is involved in the action.

It would also be the first legal action worldwide brought by inhabitants of low-lying islands against a nation state, the group added in a statement.

The complaint argues that Australia lacks adequate policies to cut its emissions, contributing to rising sea levels that are already threatening homes and damaging burial grounds and sacred cultural sites on the islands.

“Australia has done very little on climate change since signing the Paris agreement,” lead lawyer Marjanac told the Thomson Reuters Foundation, adding the government should increase its targets and phase out support for thermal coal.

“I don’t think Australians realize that their fellow Australians are on the climate frontline – they see it as an overseas problem but it’s happening in their backyard.”

A spokesman for Australian Environment Minister Melissa Price said the government was committed to addressing climate change by meeting its international targets, investing in renewable energy technology, and protecting the environment.

“We are investing A$3 million ($2.1 million) to deliver against the environmental management component of the Torres Strait Development Plan which includes addressing local climate change issues,” he said in an email.

Climate change has opened up a divide between Australia’s major parties ahead of a May 18 election, which polls have suggested the government will lose.

While Australia would not be forced to comply with the U.N. panel’s ruling, Marjanac said any decision in favour of the islanders would be a moral and political victory for them.

It would also set out what all states should do under human rights law to meet their Paris accord obligations, she added.

Those behind the action are worried their islands could disappear beneath the ocean in their lifetimes, curtailing their ability to practice their law and culture.

“We’re currently seeing the effects of climate change on our islands daily, with rising seas, tidal surges, coastal erosion and inundation of our communities,” said Kabay Tamu, one of the plaintiffs and a sixth-generation Warraber man.

“If climate change means we’re forced to move away and become climate refugees in our own country, I fear this will be colonisation all over again.”

This article was originally published by The Thomson Reuters Foundation. It has been re-published on IC with permission.