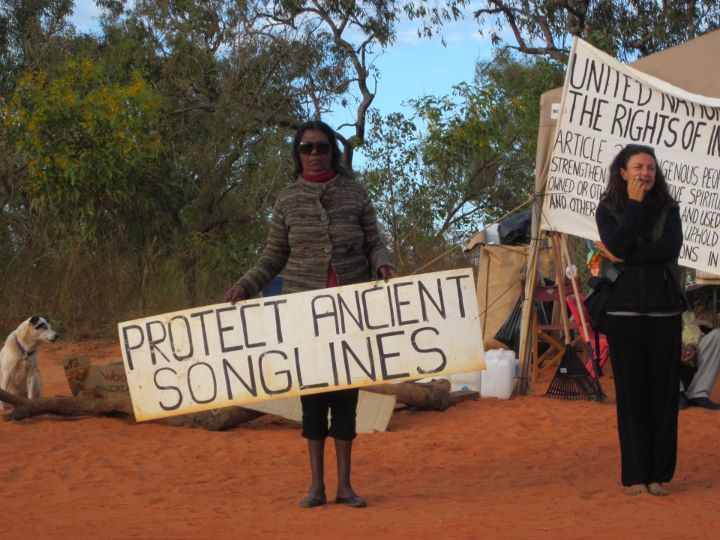 Photo Credit: 'Save The Kimberley' on facebook
Support our journalism. Become a Patron!

The land in question contains burial sites and it is part of a song cycle which is vital to Goolarabooloo life and culture. A song cycle is an oral heritage map that’s made up of ceremonial grounds, seasonal food places, vegetation for ceremonial usage as well as trees, shrubs, plants, ochre, land and water, all of which is needed, the Goolarabooloo say, “to sustain life both for humans and animals”.

Goolarabooloo traditional custodian Joseph Roe, recently told ABC Radio that James Price Point was “a special place… for me and my people” because a songline passes through it. Mr. Roe also explained that the area is important for initiations of young men and other cultural ceremonies, known as “secret men’s business”. Without it, Goolarabooloo culture would be in ruins.

Nevertheless, the ruling invalidates all decisions and agreements that have been made since the first acquisition notices were issued in September 2010.

That includes a controversial billion dollar trade-off that the Goolarabooloo Peoples were pressured into by the government. Under the threat of compulsory acquisition and the instance that the project is going to proceed proceed one way or another, the Goolarabooloo ‘agreed’ to sell their native title status for the life of the project, in exchange for $1.5 billion.

Now that agreement is quashed and Goolarabooloo have a second chance to defend their country and stand up to a government that probably couldn’t care less about harming Goolarabooloo culture, let alone protecting their rights as Indigenous Peoples.