For the past two weeks, Indigenous women from the community of Lake Tyers, in East Gippsland, Victoria, have been holding a blockade against the state government’s self-imposed rule over their community.

The blockade officially went up on March 8, International Women’s Day, in an effort to stop the government-appointed administrator (a consultant from the UK private company, Deloitte) and his staff from gaining entry to the community.

For the past six years, Lake Tyers has been governed by a policy similar to the Northern Territory Intervention; a policy that, the Women say, is an insult to Elders and their own rights and aspirations as Indigenous Peoples.

“We are sick of the Northern Territory style intervention imposed on us. Our elders who fought for the land (so that Aboriginal people could have a home to call our own) to be handed back in 1970 as free hold title to the Aboriginal people after a long struggle,” said the Women of Lake Tyers Aboriginal Trust, in a statement issued March 8.

“We now are in 2011 and once again are being dictated by government whose policies on us have once again failed. The state and federal governments 10-point plan to ‘Close the Gap’ in Aboriginal communities is discriminatory. We have no rights as Aboriginal people or as shareholders of the trust. We are being harassed and intimidated,” the statement continues.

It’s as if history is being repeated. In 1861, the Lake Tyers Reserve, or ‘Bung Yarnda‘ as it’s known to the Gunai/Kurnai people, was established as a Mission for the “Protection of Aborigines” as stated by the Victorian Board. The Reserve became a home for Indigenous peoples throughout the Victoria region who were forcibly removed from their territories. 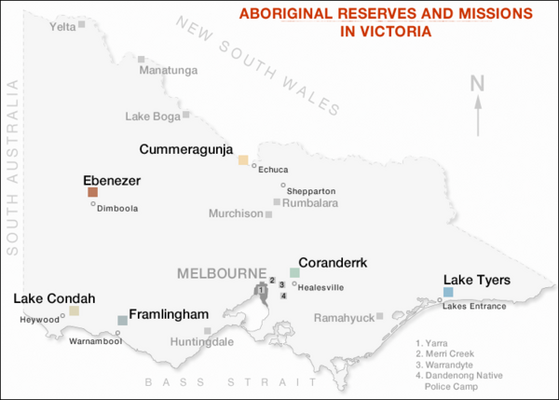 Missions and reserves in Victoria

Unlike other Missions in Australia, there was some measure of freedom for the Indigenous Peoples at Lake Tyers. However, in 1908, the government gained control of the reserve and quickly changed that.

In the late 1950’s, the government began forcing families to move from Lake Tyers to nearby towns where they could be employed as Australian Citizens. The assimilation plan was met with a great deal resistance, and from 1956 to 1965, the Indigenous population pushed to make Lake Tyers into an independent, indigenous-run agricultural coop.

After nine years of protest, in 1965, Lake Tyers was declared a Permanent Reserve. And in 1970, under the newly-established Aboriginal Lands Act, the 4,000-acre reserve was handed over to the Lake Tyers Aboriginal Trust.

From then on, Lake Tyers was controlled by Indigenous Peoples. That is, until six years ago, when the Victorian government “intervened” by placing Lake Tyers under the control of an outsider.

“We have no rights and want to exercise our right of self-determination according to the UN Declaration on Indigenous People which will enable us to control and own lives and destiny,” states the Lake Tyers Aboriginal Trust, in a March 11 Press Release. “Our elders fought for the land so that Aboriginal people at Lake Tyers could live without government control of our lives and live with dignity and respect.”

In response to the blockade, the government recently announced that it has withdrawn various services meant for the reserve.

Please show your support for the people of Lake Tyers. Show them that they’re not alone!

Updates are being posted at http://treatyrepublic.net/