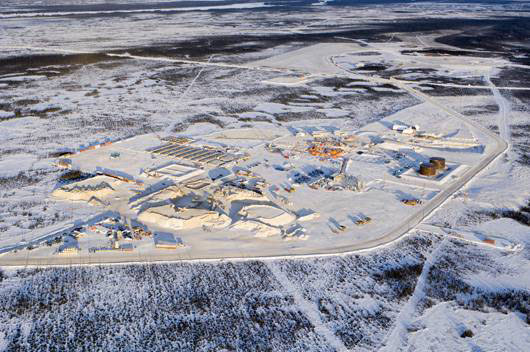 Members of the Attawapiskat First Nation in northern Ontario are holding a winter road block near the DeBeers Victor Mine, in protest of the Impact Benefit Agreement (IBA) that the First Nation signed with De Beers, a massive diamond multinational company based in South Africa.

The members have maintained a 24-hour presence at the blockade since it first went up on February 6.

“We feel that the people of Attawapiskat are not fully benefiting from the DeBeers operations in our territory. We are committed to ensuring that our people benefit directly. We are poor and we need to get out of the poverty we are in. DeBeers can help us in improving our community living conditions,” states Greg Shisheesh, a spokesman for the protesters.

The protesters want the terms of the current IBA to be revisted, so it can address a number of pressing issues for Attawapiskat, including racism and discrimination, pay equity, a desperately-needed school and new housing, explains Wawatay News.

They also want the the ratification process of the IBA to be reviewed.

“We want to ensure the membership fully understands how the IBA was ratified and we are asking for full disclosure of its contents to the people,” says Shisheesh.

Shorlty after the protest began, the Attawapiskat chief and council announced a series of “emergency measures to encourage the resolution of the latest protest of some of its members.”

“Those measures include an immediate distribution of the IBA to more than 300 homes, earmarking the profits from Attawapiskat-owned businesses and joint ventures toward legal fees (up to $100,000) school and education warchest and high-level meetings have been confirmed with De Beers executives and representatives of the member protesters with a mediator, to name a few,” notes the Daily Press.

“I do not necessarily agree with the blockage,” said Attawapiskat Chief Theresa Hall in a recent press release, “however, I am in agreement that there are important issues that need to be discussed with De Beers.”

Mushkegowuk Grand Chief Stan Louttit met with the community and the protesters last week. He says a number of meetings have been held since the blockade went up and De Beers appeared to be interested in resolving the issues.

“De Beers is a rich company with millions of dollars,” states Louttit. “The company and the province are benefiting, but the community is benefiting only a little. We’re still in poverty, we’re still overcrowded and we don’t even have a school.”