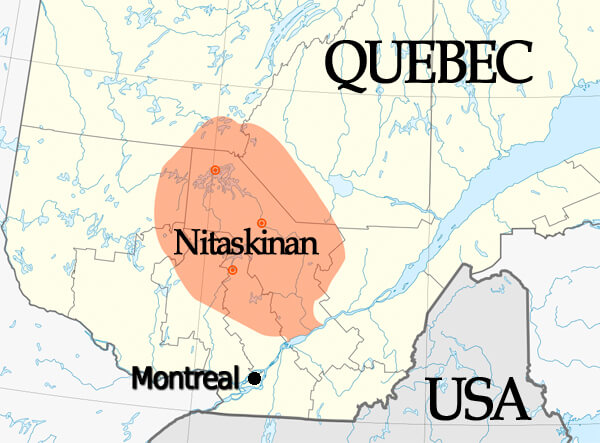 Sovereignty or rather co-management? Atikamekw First Nation leaders have raised their voices before the Canadian and Quebec governments in relation to the rights to their ancestral lands. Headed by Great Chief Constant Awashish, Atikamekw leaders released on Monday a declaration of sovereignty over their ancestral territory of Nitaskinan, and urged the Quebec government to resume negotiations with them.

Nitaskinan spans over 80,000 square kilometers north to Quebec’s capital Montreal. the Atikamekw are organized into three communities (Manawan, Wemotaci and Opticiwan), which total some 7,000 people. Most of them still speak their own Algonquian language.

Great Chief Awashish says that, since a recent judgment of the Supreme Court of Canada regarding indigenous ancestral rights, “gone are the days of negotiating the rights of the Atikametw, which have not been surrendered.”

However, the Atikamekw have not presented a program for secession. They rather say that are willing to negotiate a “nation-to-nation” agreement with the government of Quebec under a clear premise: any development in the Nitaskinan territory must be focused on Atikamekw benefit and on the protection of their culture.

Quebec Premier sees will for “co-management”

The Premier of Quebec, Philippe Couillard, believes the declaration of sovereignty rather points towards a desire to “co-management, collaboration [and] consultations, which anyway we also want to do.” Couillard also recalls that Quebec and the Atikamekw leadership reached an agreement in 2013 on land management. He admits that an Atikamekw community rejected the deal, but argues this does not mean both delegations cannot go back to the negotiating table and reach a final agreement.