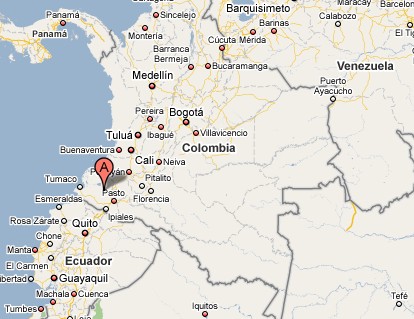 Members of the indigenous Awa in southwestern Colombia have reported that as many as 20 people were killed last week by the Revolutionary Armed Forces of Colombia (FARC).

No less then a massacre, the Awa say FARC entered two separate villages between February 4-6, and began to accuse them of collaborating with the Colombian army.

The guerrillas then started to bring people into their homes and execute them ‘as a lesson’ to the rest of the village.

The events weren’t made public until yesterday, after a small group of Awa successfully fled from their village and informed the government of what was happening. An official immediately traveled to confirm their reports.

Among the victims are two Women and 3 Children between the ages of 3 and 6.

Faced with this new mourning, and the ongoing displacement and murder of the Indigenous peoples of Colombia, as well as the land theft and constant accusations from all sides (that they are “collaborating with the enemy”), the National Indigenous Organization of Colombia (ONIC) “condemn[s] the systematic genocide we have been experiencing, which after the National Minga of Indigenous Resistance, and so far in 2009, has taken more than 50 Indians, wounded hundreds and displaced thousands.”

“As a immediate action, ONIC calls to the national and international communities, human rights defenders, and the UN to be a part of this urgent situation. And for the other Indigenous Peoples of Colombia, to support one another and to stay on alert.”