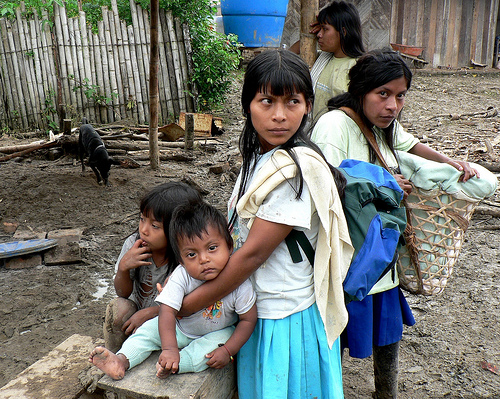 There has been another massacre of Indigenous People in Narino, southwestern Colombia.

According to initial reports by ONIC, Colombia’s National Organization of Indigenous People, early yesterday morning (August 26, 2009, at 5:00 AM) a group of armed “men dressed in military uniforms, without insignia and wearing masks, fired indiscriminately at the house of an Awá family” on the Gran Rosario indigenous reservation in the municipality of Tumaco.

“As a consequence of this macabre act, approximately eight members of the Awá people were murdered,” including 3 children ages 1, 8 and 10.

However, more recent reports from ONIC, as well as one from Survival International, indicate there were 12 Awa killed in the attack, possibly 5 children. The exact number has not been fully confirmed “…since the bodies have not been recovered…due to the unstable security situation,” says Colombia Reports.

What we do know for certain is that Mrs. Tulia García, who witnessed the death of her husband, Gonzalo Rodríguez, on May 23, 2009, was in the house with her children and her siblings. Mrs. García had recently come forward and blamed the military for her husbands death.

This, of course, is the second massacre in Narino this year. The first one took place in February, at the hands of FARC guerrillas.

Claiming they were targeting “military informants,” FARC executed and most likely terrorized eight more Awa, including three Children between the ages of 3 and 6.

Yesteray, ONIC’s leader told Agencia EFE that another nine Awa have gone missing since the February massacre, and eight more have been killed in separate incidents.

Overall, more than 60 Indigenous People have been killed and wounded in Colombia this year. Thousands more have been displaced.