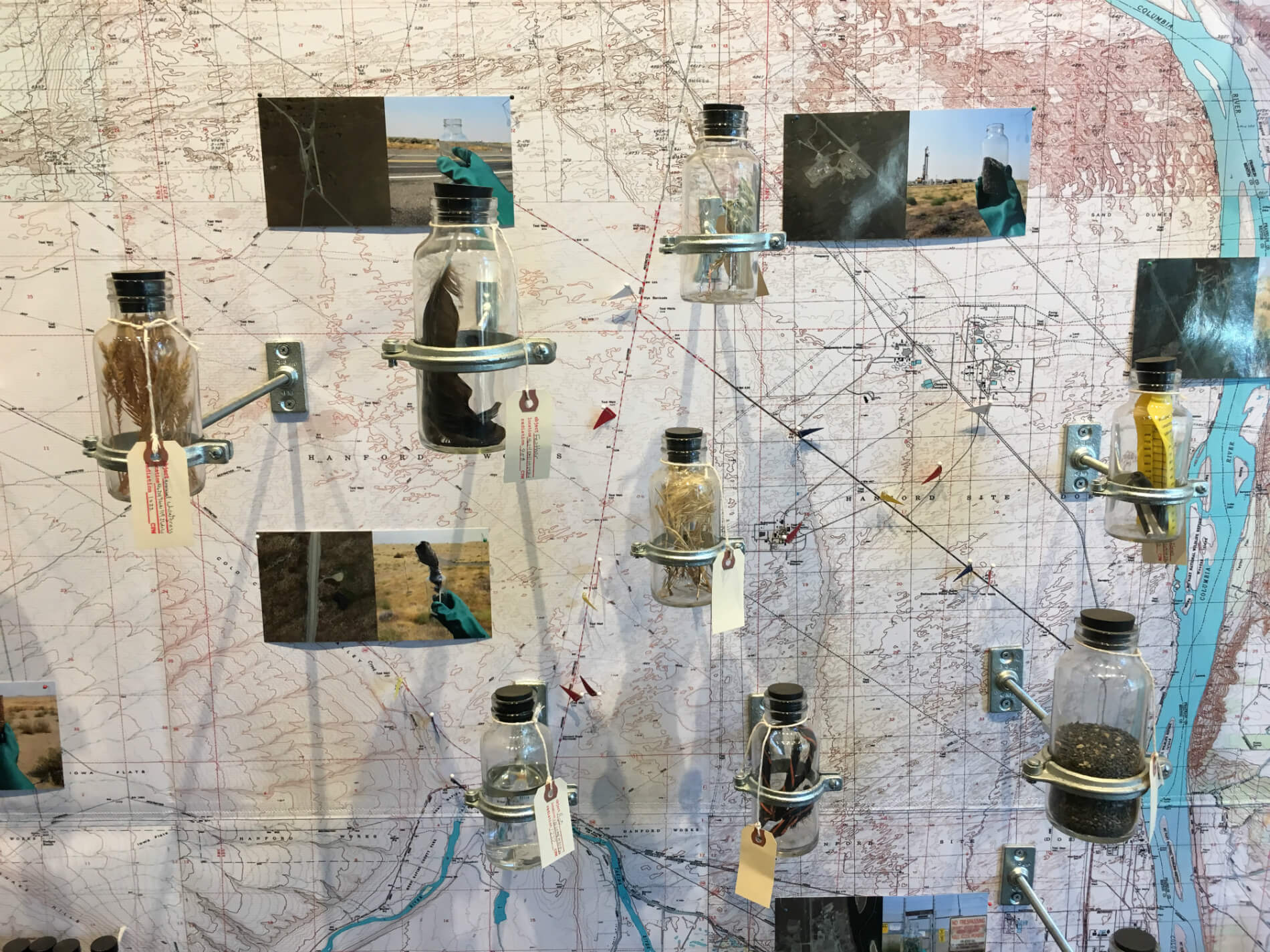 As the DOE Abandons a Toxic Mess Threatening the Columbia River, the Yakama Nation Fights Back

The DOE wants to dodge its cleanup duties by reclassifying the nuclear waste contaminating a site along Washington’s Columbia River. Not only is it a reckless move, but it may violate treaty-protected indigenous rights.

On a sunny day this past June, motorboats set out downstream on the Columbia River in central Washington along the Hanford Reach National Monument. As the boats bobbed in the water, passengers spotted deer and raptors along the river’s grassy banks.

The boaters, brought together by the Yakama Nation and Columbia Riverkeeper, had come to mourn Dr. Russell Jim, who had passed away the previous year at age 82. Jim founded and managed the Yakama Nation Environmental Restoration and Waste Management (ERWM) program, where he worked to maintain the tribe’s treaty-protected rights to this last free-flowing stretch of the Columbia River and nearby land.

The group motored through the shrub-steppe landscape—remnants of an ecosystem that once blanketed the Columbia River Basin—then stopped before an abrupt break in the scenery. There stood a blocky, windowless gray building with a thin gray pipe protruding beside it: jarring evidence of a cocooned nuclear reactor. Although defunct, that eyesore continues to serve as a stark reminder of America’s troubled, plutonium-producing past and of nuclear contamination that could last for generations.

From 1944 until the late 1980s, the 586-square-mile Hanford Nuclear Reservation, part of the Manhattan Project, processed plutonium for nuclear bombs. The operation poisoned surrounding soil and groundwater and left behind tanks full of toxic, radioactive sludge near the banks of one of America’s largest rivers. Hanford contains 60 percent of the nation’s high-level radioactive waste and is considered by many to be one of North America’s most contaminated nuclear sites. 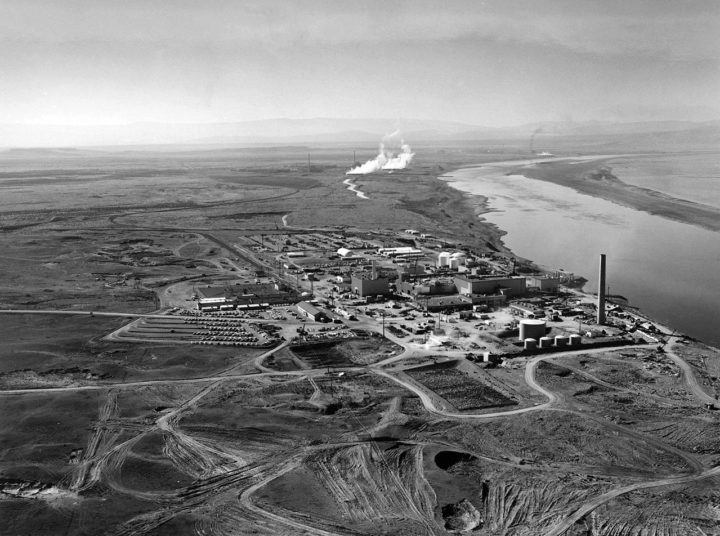 The N Reactor at the Hanford site, along the Columbia River.

“The Hanford Reach is remarkable in both good and bad ways,” says NRDC senior attorney Geoff Fettus, who litigates and testifies before Congress on issues concerning the disposal of radioactive waste. ”The magnificence of the river and the open landscape are amazing.” Its 195,000 acres serve as a critical spawning ground for salmon and support a wealth of rare native plants and animals, including some 258 bird species. (White pelicans, bald eagles, and great blue herons are all common sights.) It also hosts a renowned spectacle of spring wildflowers. But unfortunately, Hanford’s beauty is badly scarred by Hanford Nuclear Reservation’s “sheer scale of contaminated mess,” Fettus adds.

Jim, the Yakama elder, had long advocated for the U.S. Department of Energy (DOE) to clean up its mess at Hanford. “As a result of our Atwai Dr. Jim,” says Alfrieda Peters, using the native term for a person who has passed on, “we saw how the nuclear industry was affecting Yakama Nation—not only treaty rights but also our way of living.” Peters worked alongside Jim as ERWM’s education and outreach specialist. After Jim died, his photos were put away and his name wasn’t spoken for a year, to allow him peace on his journey, Peters notes. It wasn’t until the Columbia River memorial that Jim’s name was spoken again, as organizers urged participants to continue his mission. 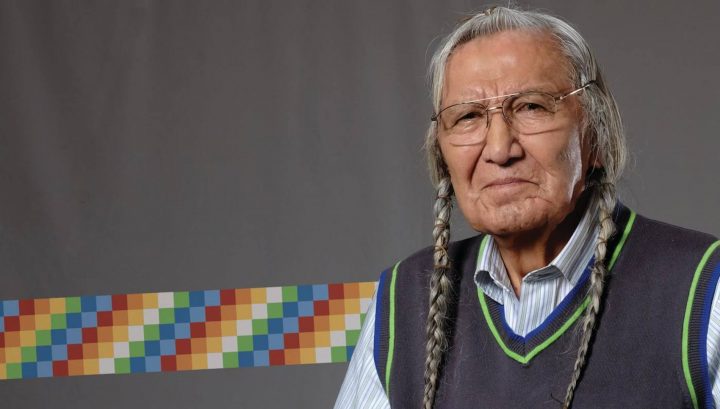 But the mourners knew that the work would now grow more difficult. Less than two weeks before the memorial, the DOE had granted itself the authority to “reclassify” the extraordinarily toxic nuclear waste in Hanford’s tanks without any oversight by the U.S. Environmental Protection Agency or the states of Washington and Oregon (or by the Yakama Nation, for that matter). The move assumes that the high-level waste has magically transformed into low-level radioactive materials and contradicts explicit directions in the Nuclear Waste Policy Act passed by Congress in 1982. Under DOE’s unconstrained new authority, dozens of Hanford tanks that contains tens of thousands of gallons of the world’s most toxic waste are likely to be left in place and sealed off with grout or pumped and dumped on site.

The Yakama Nation, which lived on the land long before this messy chapter of U.S. history began 75 years ago, considers the move unacceptable, Peters notes. Not only is the agency abandoning tank waste without proper cleanup, but the government’s action also “allows DOE–Hanford to leave contaminated soil from leaking tanks with radioactive contaminants, now traveling toward the Columbia River, approximately seven miles away,” she says. “It’s a treaty violation.” 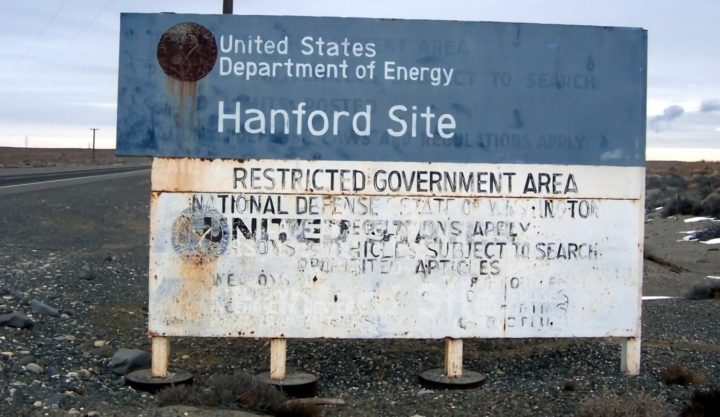 A Call to Action

The government site’s nine plutonium reactors produced 56 million gallons of toxic nuclear waste before they shut down in 1972. This waste is stored in “farms” of 177 underground tanks, some of which are not much thicker than a garbage drum, and some are as large as a basketball court. Contents of around 160 tanks need to be retrieved and groundwater plumes cleaned, as they contain a toxic brew that can cause cancer and damage genetic material in both humans and wildlife. Even today, contamination events alarm cleanup workers and contractors, and fish sampled from nearby waters have been found to contain high levels of heavy metal contaminants.

“It’s hard to wrap one’s mind around when thinking of how much work is to be done to clean up a toxic mess of such magnitude,” Fettus says. “It’s why NRDC has always been supportive of the cleanup work and why we are pushing so hard to normalize the process, with environmental law.”

Yakama Nation’s involvement in the Hanford cleanup started in the 1970s with Jim playing a formative role, Peters says. Then serving as a Yakama Nation Tribal councilman, Jim asked a small group of tribe members: “What do you know about Hanford?” 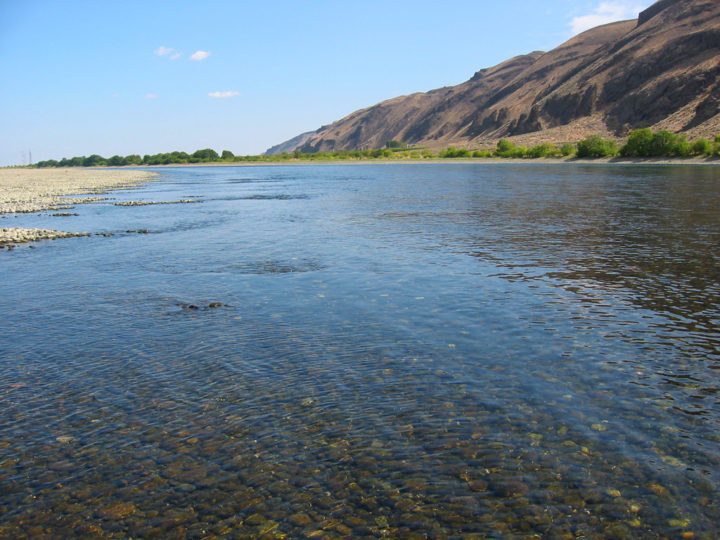 The Hanford Reach of the Columbia River is the only part of the river in the USA that is still free flowing, not impounded behind a dam or a tidal estuary. It’s ironic that the one free flowing reach is near the Hanford Nuclear Reservation. Photo: pfly on flickr. (CC)

“He continued with provocative questions,” Peters remembers, “such as ‘How is the nuclear production impacting the land? The Columbia River? What is it doing to the salmon? How is it affecting our people? Our treaty rights?’” The tribe had the right to find out, he said.

After all, thanks to its mild weather, the Hanford area was the “Palm Springs” for the Yakama people and other local nations—a wintering ground that they trekked to each year from the snow-capped Cascade Mountains. When spring came, families went into local alpine areas to hunt, fish, and gather traditional food and medicine. Many had designated fishing spots along the river.

These questions led to the Yakama Nation’s first action in 1979, to stop the transit of nuclear products across their reservation. Jim hired Peters for the Yakama Nation Nuclear Waste Program in the mid-1980s; together they helped prevent Hanford from becoming a national waste repository. 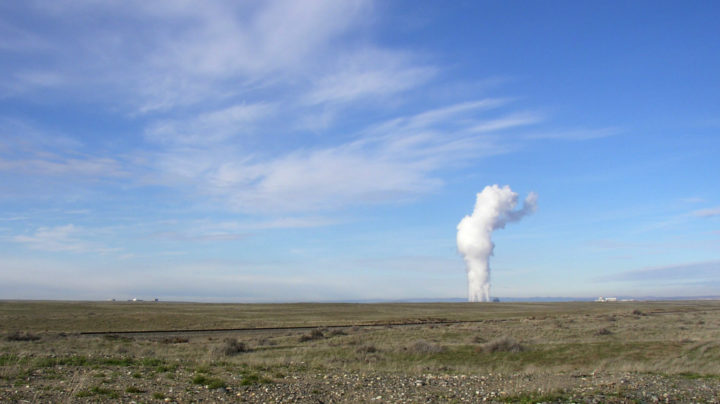 Plume from Nuclear Power Plant on Hanford Reservation as seen from south. Photograph taken by TobinFricke

Jim laid the groundwork for tribal participation in decision-making processes during the Nuclear Waste Policy Act amendment hearings of the late 1980s. As part of those hearings before the U.S. Senate, Jim “gave them a history lesson,” Peters says. He reminded lawmakers that “the Yakama nation has a treaty with the United States, and in the treaty, a section states we have the privileges and rights secured to our tribal people to hunt, fish, and gather food in usual and accustomed places,” Peters recalls—including in the ceded area where Hanford Reservation was sited. Preserving those privileges includes preventing injury to natural resources and ensuring accessibility to sacred sites for traditional ceremonial purposes under the American Indian Religious Freedom Act.

The DOE’s plan to abandon an as yet undetermined amount of radioactive waste (or seal it in with grout) is neither safe nor responsible, say Washington State officials. The director of the state’s department of ecology, Maia Bellon, sent the federal agency a six-page letter in May demanding that it come back to the negotiating table to find a path forward for the Hanford cleanup, or face legal repercussions.

The best way to dispose of the site’s waste, say experts, is to use vitrification, a process by which waste is stabilized with glass and then placed in a deep geological repository where it can’t contaminate water or soil. The efforts to get a vitrification plant going have been underway for years (with support from all interested parties), but the process is expensive and technically complex. It’s a safety measure the DOE allows itself to skip by reclassifying the waste.

Slapping a new label on high-level waste is a move that Dan Serres, conservation director of Columbia Riverkeeper, calls “Orwellian.” “If you’re in a marathon at mile three, you can’t just stop the race and say, ‘I won’ by moving the finish line,” he says. “Sure, the race is over much faster if you move the endpoint, and it costs a lot less.” Essentially, this is what the DOE is doing.

The DOE has tried this gambit before. In 2003, the Bush administration tried to give itself the authority to reclassify waste without any oversight or restraint. In response, NRDC, the Yakama Nation, the Shoshone-Bannock tribes, and the Snake River Alliance together sued the DOE and won: Courts noted that only Congress has the authority to reclassify waste. The decision was later reversed on procedural grounds (the higher court wanted more factual development), but the federal district court’s underlying substantive decision remains. Contemporaneously, Congress got involved and allowed the DOE some reclassification in South Carolina and Idaho, two other states with sizable stores of high-level radioactive waste. But Congress never granted such authority to the DOE in the state of Washington.

Recently, Fettus, who argued the 2003 case, started receiving phone calls from Tom Carpenter, an attorney who directs the Hanford Challenge watchdog organization, and Tom Zeilman, a lawyer for the Yakama Nation tribe. The trio had worked together before to try to force the government to clean up Hanford. “It was like hearing, ‘Hey, we’re getting the band back together,” Fettus says. In June, advocacy groups issued a joint statement condemning the DOE’s attempt to cut corners in fulfilling its responsibilities to clean up more than 100 million gallons of high-level radioactive waste at sites in South Carolina and Idaho as well as at Hanford.

The administration’s reclassification of waste is an “insult added to injury,” Serres says. In April 2017, the government had threatened to remove national monument status from Hanford Reach, as part of the U.S. Department of the Interior’s reconsideration of protections granted to various sites in the nation’s network of public lands. (Hanford was later spared from the chopping block.)

For her community’s part, Peters is holding fast to the cause that her friend and colleague Atwai Jim worked so long and hard to achieve. “Cleanup needs to occur, and to Yakama Nation standards,” she says. “The Yakamas lived here before it was Washington or before it was Oregon Territory. We still have rights there, [and] the U.S. has an obligation to protect and preserve them.”

This article was re-published with permission from the Natural Resources Defense Council.