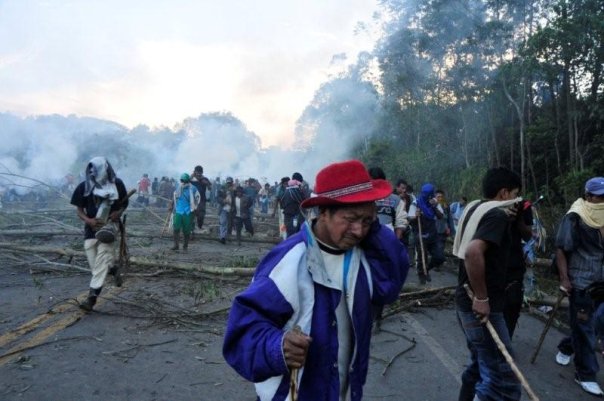 More then 75 people were injured and at least one was killed after a violent military crackdown against the National Mobilization of Indigenous and Popular Resistance, or Minga, currently taking place in Colombia.

“It was terrible, and so unfair. We had no weapons. We only have our ceremonial staffs which symbolise authority. At this moment (midday on Wednesday) they are still shooting, although they have removed us from the Pan American highway,” said Manuel Rozental, a spokesperson for local indigenous groups.

The Mobilization began on October 12 as a national effort to commemorate 516 years of indigenous resistance, and as Mario A. Murillo explains, to “protest the government’s failure to comply with dozens of promises regarding land rights, compensation for past crimes committed against them by organisms of the state, [and] the extensive militarization of their territories.”

Among the many protests taking place throughout Colombia, demonstrators set up a roadblock on the Pan American highway in northwestern Colombia, to demand a meeting with Colombian President Alvaro Uribe over set of key issues that were outlined before the mobilization began.

Uribe responded to the blockade by declaring a state of emergency and sending the military.

“To clear the road, the army and police went in with helicopters and armoured vehicles, and opened fire [on the unarmed indigenous protesters] with live ammunition,” reports IPS News.

Despite the violence, which some government officials have justified by claiming the protest has been infiltrated by paramilitary groups, “the number of protesters is growing. More people are coming down from the mountains to participate in the demonstration, and we estimate there are at least 200,000 indigenous people involved throughout the country,” said Rozental.

Your Support is Urgently needed

Please take a moment to support the mobilization by denouncing the use of the army, and by urging the Colombian government to guarantee the rights of indigenous people as well as the right to protest and free expression. Send an email to: