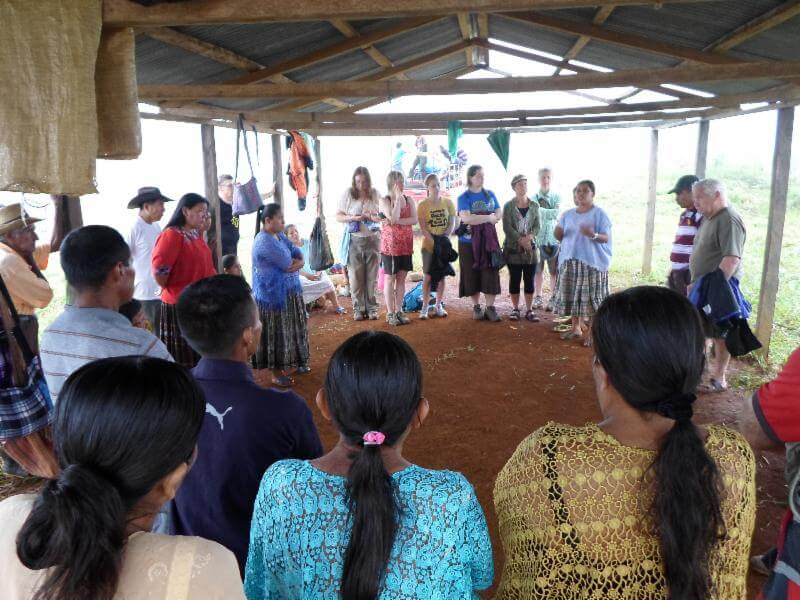 Mining company a Co-Defendant With Hudbay Minerals in ongoing Hudbay Lawsuits in Canada
In this photo [June 2, 2014], Margarita - a victim of the 2007 gang-rapes and plaintiff in the Hudbay lawsuits - addresses Lote 8 villagers and our group of visiting North Americans, in the Community Center.
Support our journalism. Become a Patron!

June 7, 2014, Guatemala–Early this morning, at least a dozen heavily armed CGN guards drove illegally into and were found occupying this very Community Center, re-built here in the center of the former Lote 8 community that was violently attacked and burned to the ground in January 2007, by CGN/ Hudbay Minerals security guards, Guatemalan police and soldiers. On January 17, 2007, eleven Lote 8 women were gang-raped by Hudbay/CGN security guards, soldiers and police, and over 100 homes were burned and destroyed.

The Lote 8 community had been planning yet another meeting today to discuss the on-going land dispute with the CGN mining company. Ever since the Canadian mining giant INCO illegally acquired these lands in the 1960s, the Mayan Q’eqchi’ people have suffered repeated violent, illegal evictions, killings, shootings, rapes.

When they came to the Community Center this morning, they found it occupied. The people of Lote 8 are alerting the national and international community to the threat of possible repression and eviction they again face.

A History of Mining, Repression and Impunity