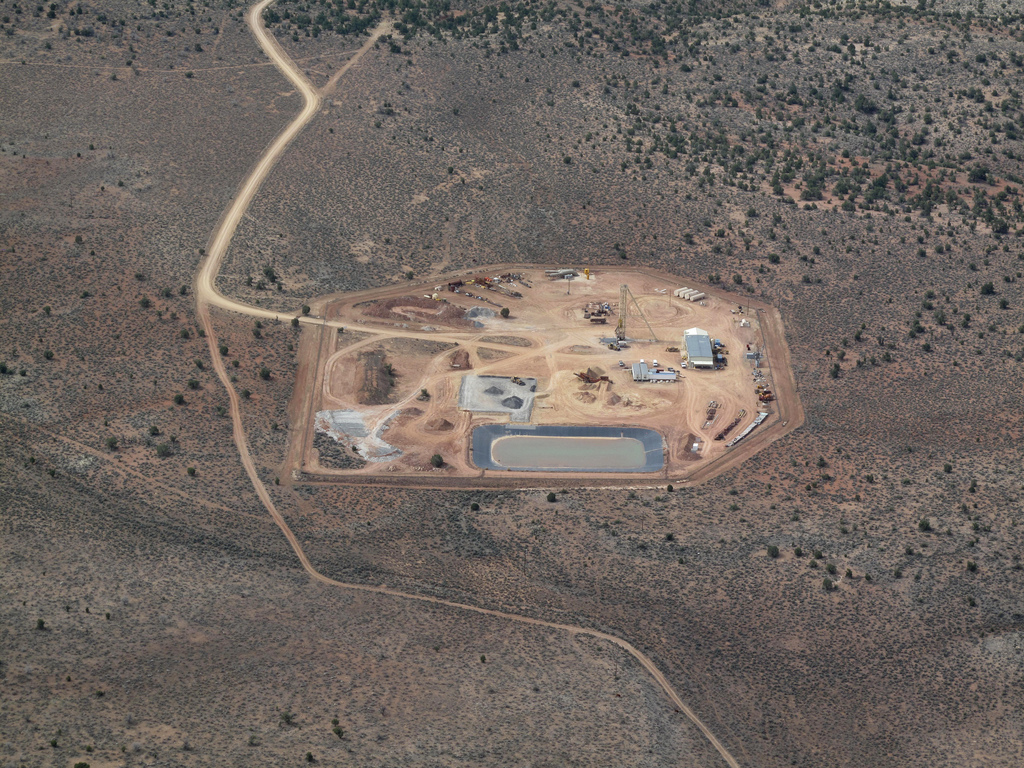 The Arizona Department of Environmental Quality (ADEQ) has approved water and air quality permits for three uranium mines near the Grand Canyon, including the Arizona 1 mine and the proposed Canyon Mine near Red Butte, a site held sacred by the Havasupai Nation. Brenda Norrell reports.

Arizona issues uranium mining permits that endanger water supply in Southwest
.
GRAND CANYON, Ariz. — As the earthquake and tsunami hit Japan, revealing the true danger of nuclear power, Arizona approved uranium mining in the Grand Canyon in a sacred place where prayers are said for the protection of the world.

Gathered at sacred Red Butte in the Grand Canyon to oppose uranium mining here in 2009, Supai said this is a sacred place where they go to offer prayers for the wellbeing of the world.

Speaking of the Supai responsibility to protect the land, water, and air here from the poisons of mining, Supai Waters said, “If we do let this happen, we would be the murderers of the world. We cannot let that happen.”

Supai Waters said that protection of the Grand Canyon also affects the weather patterns and climate of the earth.

“My people have lived in the canyon since time immemorial. The canyons contain power points and vortexes. If there is tampering or pillaging, the earth will not be the same. There are places where we guard. These sacred places have to do with the weather, the wind, the sun, the celestial movements. That is why we are here protecting it,” Supai Waters said.

Matthew Putesoy, vice chairman of the Havasupai Nation, said the Grand Canyon is a national treasure, inviting 5 million people every year to explore and be inspired by its beauty. “To the Havasuw ‘Baaja, who have lived in the region for many hundreds of years, it is sacred. As the ‘guardians of the Grand Canyon,’ we strenuously object to mining for uranium here. It is a threat to the health of our environment and tribe, our tourism-based economy, and our religion.”

American Indian Nations joined local residents to oppose this threat to their water and air.

However, Arizona regulators caved in to the pressure from the corporation — Denison Mines based in Toronto, Canada — and the coopted US government.

The press statement was issued on March 10, 2011. The earthquake and tsunami struck Japan on March 11.

The Havasupai territory in the Grand Canyon is targeted by this new uranium mining from Denison Mines based in Toronto, Canada. At the same time, Navajo communities and the aquifer that provides their drinking water are threatened by new uranium mining along the borders of their lands in New Mexico. Already, the same area of Church Rock, N.M., was the site of one of the United States worst radioactive spills.

Between Albuquerque and Grants, where Navajos and Pueblos live, there are even more new uranium mining permits issued by the state of New Mexico: http://www.cibolabeacon.com/articles/2011/03/04/news/doc4d70271827536314023640.txt

Listen to Native Americans and local residents speak out against this uranium mining at the summit in July of 2009. Recordings by Earthcycles and Censored News. Scroll down the list for 93 audio recordings from the summit at Red Butte: http://www.earthcycles.net/nts

There will be a benefit concert to Stop Uranium Mining at the Grand Canyon on March 26th in Flagstaff at the Orpheum Theater.

“Arizona regulators are throwing caution to the winds by risking even more radiological contamination of the soil and water of the Grand Canyon region,” said Taylor McKinnon of the Center for Biological Diversity, which has fought to protect air and water around the Grand Canyon. “The Department of Environmental Quality has a statutory duty to protect the environment and should have denied the permits. Now it will face appeal.”

A U.S. Geological Survey report issued in 2010 found “elevated radioactivity is evident at all sites” previously mined or explored for uranium on public lands north of Grand Canyon. The report also found that “fifteen springs and five wells in the region contain concentrations of dissolved uranium that exceed the U.S. Environmental Protection Agency maximum contaminant level for drinking water and are related to mining processes.”

In issuing the permits, the state refused to require monitoring for fine particulate matter uranium dust, which can enter the bloodstream through inhalation; alpha radiation can then impact cells and DNA, causing cancer and genetic defects. Fine particulate dust has been linked to several forms of toxicity in humans.

The aquifer pollution permit lacks aquifer water-quality monitoring down-gradient of the mine. It also lacks a remediation plan or bonding for such a plan in case aquifer contamination occurs. The permit issued is a “general” permit — the kind used for gas stations and other common facilities. Under the Napolitano administration, Arizona environmental regulators required a more stringent “individual” permit for the Canyon uranium mine.

“Given the potential threat to the groundwater and ultimately the seeps and springs of Grand Canyon, it is outrageous that the Arizona Department of Environmental Quality is not requiring the most stringent protections and is moving forward with permitting this mine under a permit that is supposed to be for activities that pose little threat to the aquifer,” said Alicyn Gitlin with the Sierra Club’s Grand Canyon Chapter.

Deep aquifers have already been contaminated by uranium mining around Grand Canyon. Officials are still unsure how to clean up uranium pollution leaching into two Grand Canyon National Park creeks from the closed Orphan Mine on the south rim.

“State regulators in Arizona can’t guarantee that mining won’t contaminate regional aquifers. If that happens it would be impossible to clean up, and the damage would be permanent,” said McKinnon. “The state of Arizona is playing a foolish game of Russian roulette with a precious and irreplaceable resource.”

Today’s permits were issued as the U.S. Department of the Interior conducts public meetings on its proposal to protect 1 million acres of public land around Grand Canyon National Park from new mining claims and the development of existing claims lacking valid existing rights. All three mines permitted today occur within the million-acre area; none of the mining claims in the area have valid rights.