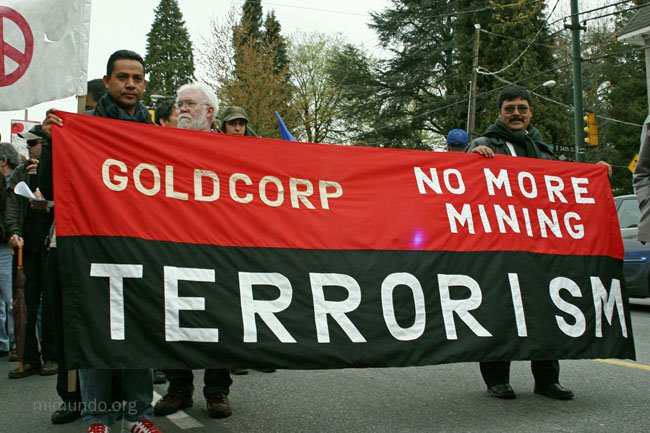 In a curious and surprising turn of events, Goldcorp has announced they are temporarily suspending mining operations in Honduras (the San Martin mine in the Siria Valley) and Guatemala (the Marlin mine in the Mayan territories of San Miguel Ixtahuacan and Sipakapa).

What do you think, folks, is it an April Fools’ joke? Of course, I say that tongue in cheek, but with the way Goldcorp (along with nearly every other mining company in Canada) seems to operate, it honestly wouldn’t surprise me. Yuck. Yuck. Yuck.

In a notable turn of events, Goldcorp Inc. announced it is temporarily suspending its mining operations in Honduras (the San Martin mine in the Siria Valley) and Guatemala (the Marlin mine in the Mayan territories of San Miguel Ixtahuacan and Sipakapa).

Taking no questions from the media, Goldcorp Inc. Chairman Ian Telfer and CEO Kevin MacArthur read from a prepared statement. They announced that they could no longer, in good conscience, continue to earn millions of dollars each from Goldcorp’s global operations, until they had fully investigated the mounting allegations of environmental destruction, human rights violations and the destruction of local economies in many communities and regions where Goldcorp operates.

Expressing contrition for earning so much money at the expense of other people’s alleged suffering and environmental harms, Telfer and MacArthur claimed it is not an issue particular to Goldcorp Inc., but rather that the global economic model that is at fault. They pointed out that for years they have been managing their global mining empire according to the laws and rules as they exist, and that they now suspect “it is the very laws and rules that are unjust and unfair.”

To add weight to their words, Telfer and MacArthur announced some immediate initial steps:

They are suspending mining operations until such time as the company has participated in and completed a binding negotiation process with the affected communities, so as to determine the amount of compensation and reparations Goldcorp might owe to the peoples and communities of the Siria Valley and San Marcos for the alleged environmental harms, the destruction of the local economies and various human rights violations, including cracked homes, water depletion and contamination, air contamination, the manipulated bringing of criminal charges against community leaders, cases of repression, etc..

In apparent reference to “consultation” processes of the past, Telfer and MacArthur stated that this negotiation process would be binding on the company and the major investor beneficiaries, and would not be a process, as in the past, of “consulting with the people, listening to their concerns and complaints, and then proceeding to do what our company and investors wanted to do anyway”.

In a move that shows that Ian Telfer is taking the decision personally, Telfer announced that he will instruct the University of Ottawa to take his name off the School of Business Management that was named in his honor after he gave the University of Ottawa $25,000,000 of his personal fortune. Instead, Telfer says, he will ask that the School of Business be renamed “the Sipakapa Institute for Community Controlled Development”, in honor of the Mayan Sipakapan people that have “worked very hard to deal with the harms caused by mining and to design and implement a development model that contributes to the well being of the local population, communities and environment.”

“We need to educate Canadian students about a different vision of economic development – one based on community values and well-being, sharing and equality between all countries and people, and protecting the environment, and not one based on harmful exploitation, in the name of ‘development’, that responds to the whims of faraway investors and voracious consumer markets.”

Furthermore, Telfer said he will make similar instructions to the University of British Colombia, given that he made a $5,000,000 for UBC’s new Earth-Sciences Building. “I will instruct the UBC to move those funds to Guatemala and Honduras and finance local schools and scholarships programs for the children of the communities that have been harmed by mining and the unjust development model.”

In a poetic if not convoluted reference to Robin Hood stories they read as children, Telfer and MacArthur claimed that they could no longer participate in an “unjust global economic pyramid scheme that, in the name of ‘development’, robs from the poor to give to the rich.”

In a final comment that is sure to cause ripples in the global mining and investor industries, as well as the “aid” agencies of the Canadian and US governments, Telfer and MacArthur conclude it is time “to put an end, once and for all, to the model of international charity, whereby wealthy countries and people make extraordinary profits through oftentimes harmful exploitation and environmental destruction and then ‘deem’ to give small amounts of ‘aid’ back to the very people and communities that have been harmed and exploited.”

“With these small steps we are taking, we hope not only to begin to rectify the harmful situations that Goldcorp might have partially caused and benefited from but also to contribute to the construction of a just and equal world. The wealthy nations and people are very much a causal part of the problem and we must be part of the solution.”

The above image is from http://mimundo-jamesrodriguez.blogspot.com