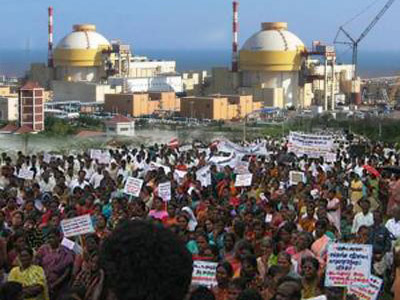 Ten days ago, on March 19, 2012, the National Indian government gave its approval for the first of two Russian-designed nuclear reactors at Koodankulam (Kudankulam) in the southern Indian state of Tamil Nadu.

The controversial reactors, which have been under construction since 1988, are situated in a highly populated area. Three million people live within a 30-kilometer range of the two reactor sites, some of them less than a half-mile away.

Soon after the approval was announced, some 10,000 locals began to peacefully protest at the gates of the nuclear power station.

The government’s response was severe. According to a recent appeal from DiaNuke.org, thousands of armed policemen began terrorizing the protesters and the villages in the vicinity of Koodankulam reactor, particularly Idinthakarai village, which is at the forefront of the ongoing anti-nuclear Struggle.

Furthermore, at least 500 people–some reports say as many as 3,000–have been arrested–some, just for trying to get to the protest site.

At least 178 protesters have also been charged with serious crimes, such as terrorism and “waging war” against the state.

Meanwhile, an all-too-familiar psywar is being waged from on high.

The Government is said to be conducting a “witch-hunt” and trying to paint random people as naxalites (militant communists).

For some time now, India Prime Minister Manmohan Singh has asserted that “Foreign NGOs” are behind the protests, a claim that has been officially endorsed by the government of Russia

An Appeal for Support

While International Support for the Anti-nuclear Struggle in Koodankulam may be viewed with derision and could even be used as further ‘proof’ of foreign involvement, it is still important for us to stand with our brothers and sisters in India.

That said, the Nuclear Information and Resource Service has initiated a letter-writing campaign urging India’s top government officials to Leave the protesters alone and walk away from Kudankulam.

Alternatively, you can send Protest letters to:

As well, Please contact these officials and urge them to stop harassing people and to allow essential supplies like water/food/electricity/diesel/medicines:

Background to the nuclear project and the protests
The protest against the Koodankulam Nuclear Power Plant started as soon as the project was commenced in 1988. The agreement for the reactors was inked in 1988 by the then Indian Prime Minister Rajiv Gandhi and Michael Gorbachev, the President of USSR. More than 15,000 people gathered to protest in the neighbouring town of Kanyakumari in 1989 when the police opened fire indiscriminately, injuring several people.

After the collapse of the Soviet Union, the project itself went in a limbo, to be resumed after a decade in 1998. The people around the area have been protesting against the project ever since: court cases, petitions, letters to political leaders and policy makers and demonstrations The nuclear accident in Fukushima in March 2011 and the ensuing downturn in public opinion about nuclear energy unleashed a new life to the Koodankulam protests. In August 2011, the people of Idinthakarai and other surrounding villages started agitations afresh: 125 people sat on hunger strike for 12 days while tens of thousands gathered in their support.

For the past 8 months after August 2011, people in Koodankulam have been protesting peacefully and non-violently for the right to a healthy life, consultation and transparency in government conduct.