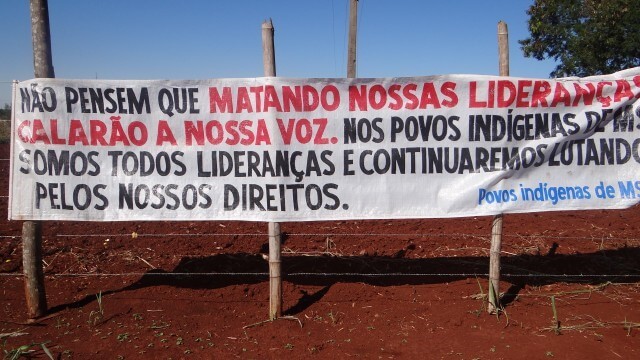 According to the complaint filed with the Federal Public Ministry (MPF), on the morning of Feb 7, a Kaiowá youth of 17 was kidnapped by an armed group in the vicinity of Naviraí (Mato Grosso do Sul, Brazil), and subjected to torture sessions – beatings and psychological pressure. The Indigenous Peoples live in camps that compose the Indigenous Land Santiago Kue, located along BR-163, the highway connecting the towns of Juti and Naviraí.

This situation reinforces the existence of armed militias with the aim of attacking Indigenous communities and their leaders. It is not the first time that such evidence has verified something that is no longer a theory, but possesses concrete elements. The purpose of these criminal bands is to prevent the Indigenous people from gaining access to their traditional territories, especially those already demarcated or identified by the Funai (National Indian Foundation).

According to the report accompanying the complaint, it was 11am when the Kaiowá youth was returning from the city of Naviraí, walking along BR-163, after daily working hours. While passing by the stretch opposite the fazenda known in the region as “Central”, next to the Federal Highway Police post, he was aggressively approached by an armed group consisting of approximately 20 men, who were in a convoy consisting of two Hilux trucks, one black and one white, four passenger cars and two motorcycles.

With the vehicles, the gunmen quickly surrounded the youth, who was powerless to react or possibly escape. The gunmen showed him the weapons, which they carried in their belts. The young man was taken for about 1km into the land belonging to the Fazenda Central. Behind a small area of brush, with access to a dam, the group parked. The gunmen photographed the face of the Indigenous youth and passed it to him to identify the name and appearance of the leaders of the village Kurupi.

Terrified and tense, the young Kaiowá said only that he did not belong to that community. It was all he managed to say. The gunmen then began to beat him and aimed their guns at him, ordering him more than once to kneel to be executed. From time to time, they pointed to the dam telling the Indigenous youth that they would tie him with rocks and watch him drown. Violence was used so that the Kaiowá would “cooperate”. This martyrdom lasted more than six hours. After swearing to kill many others, including Kaiowá leaders of the region, the young man was left at the site. The criminal gang drove off.

The history of violence against the villages in the area of Naviraí shows that the attack was not by chance, nor was it an isolated incident. To the contrary, it is unfortunately part of an active pattern of gunmen hired by landowners in the region. Everything indicates that there is in fact a longstanding well-established group functioning as an armed militia that has been circulating through the region to prevent the advance of the Indigenous Peoples in the recovery of their traditional territory.

According to Indigenous narratives of some asking not to be identified, the gunmen have been carrying out a strong intentional siege on the communities. They observe from paddocks on the roadway, especially next to the Federal Highway Police post, movements throughout the region. The monitoring results in such criminal actions. Indigenous sources affirm that the gunmen daily probe all members of the village and the camps that surround the Fazenda Central. They monitor and descend on the Indigenous people.

The community of Kurupi has long been denouncing, without effect, the attacks being carried out. In October of last year, there was an attempted kidnapping of a wheelchair-bound Indigenous person by the gunmen.

The region has had several cases of attacks and even torture carried out against Indigenous individuals and communities. The Kaiowá denounced these facts and at the same time requested that the authorities call for the police force to conduct patrols of the area. This being intended to ensure some measure of security for the communities. Nothing has been done so far.

In October of last year, CIMI denounced a wave of threats that came from the fazenda owners in the region with the clear intention to demobilize the Indigenous struggle to regain their traditional territory – areas from which the Indigenous people were systematically driven away by these same fazenda owners and families in the past. Read more here.

No auctions, but with militias:

In mid-2013, there began open and public circulation of information on the planned “Auctions of Resistance“, organized by farmers and rural unions of the State of Mato Grosso do Sul. The organizers proudly announced that the funds raised from the sale of cattle would be utilized for private security contracting and buying weapons. The Court held that the auction was a way to inject resources into the formation of a militia.

The revolting initiative generated a wave of denunciations and a large scale mobilization by the Indigenous movement and its supporters. By court order, the auction was prevented. Despite the decision, the fazenda owners conducted it. Nevertheless, the decision was that the amount collected, about R$ 1 million, was deposited in escrow and its utilization under the approval of the Indigenous communities.

It can be said that this fundamental measure managed to halt the public face of the formation of anti-Indigenous militias, but it is delusional to believe that the Court could prevent what in practice, in the underworld of criminal activity, the fazenda owners and ruralistas (agribusiness interests), endowed with great economic power, originating from, above all, the illegal exploitation of Indigenous lands, continue with the regimentation of gunmen to consolidate the expulsion by force of the Indigenous peoples from their traditional territories. This is what they refer to as private security.

The case in Santiago Kue is sound demonstration that the militias continue to be formed and sponsored by the masters of agribusiness. According to an investigation by the Attorney General (PGR) of Ponta Porã, the murder of Nísio Gomes Guarani Kaiowá was carried out under such circumstances. Under the pretense of private security guards, the fazenda owners continue to organize. Added to this is the federal government policy of paralysis of Indigenous lands and the intention of changing the demarcation procedure (PEC 215 and others). Thus, they feel themselves the enemies of the Indigenous peoples, free to practice true absurdities against life, common sense, the Justice system, democracy and the Democratic Rule of Law.

By all indications, at the outskirts of Naviraí, one of these armed militias geographically dominates the region inhabited for centuries by the Kaiowá people, and from where they will never leave. They openly practice this terror preventing the Indigenous people from even exercising the right to come and go. They do this all the time, even in broad daylight. They do so with impunity. It is expected that with this episode of violence, which by luck did not end with yet another murder among the many already on record, measures are to be effectively taken with a view of freeing from death those who seek only life and the physical and cultural survival of their sons and daughters.