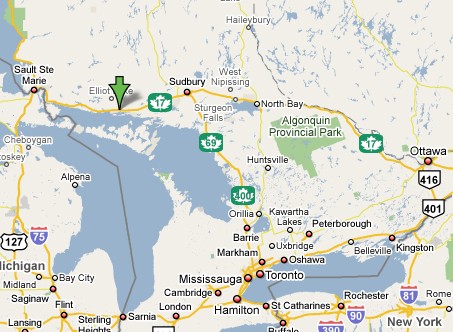 Another uranium conflict brews in Ontario

The Band Council of the Anishinabek at Serpent River issued the following Press Release on April 30, warning of yet another uranium conflict brewing in Ontario–that is to say, a conflict brought on by Ontario’s refusal to accept their constitutional obligations towards Indigenous Communities.

April 30 – It has come to the point where Serpent River First Nation leaders insist they want decisive action from the Ontario government on a list of matters pertaining to development in their traditional territory including the exploration of minerals, especially uranium.

Elected Chief of Serpent River First Nation, Isadore Day, Wiindawtegowinini says he’s concerned that private sector proponents for development are moving faster than government responses to consultation requirements for First Nations. “It poses real challenges between industry and First Nations when government moves slower in First Nation negotiations than it does when pushing through proponent approvals for expropriation of Crown lands” Day says. He goes on to say “what’s worse is that Consultation and Accommodation requirements are not even in the form of mutually agreed policy between the Crown and the First Nations, and yet government is approving land expropriation in favor of development in traditional lands”

Uranium exploration and potential development is a serious matter that the community has recently established a strong formal position on. “We have experienced a number of tragic incidents with respect to uranium mining impacts in our community’s history” says Day, “and we are determined not to allow any of that damage to be inflicted upon our people or our lands ever again.” The community realizes that the short term gain and the economic benefit is suspect of being “not worth the impact.”

Chief Day stated that he realizes that there will have to be discussions regarding changes to the Ontario Mining Act but for now the community has said that it is opposed to any uranium or any mineral exploration. This position has been supported by a strongly worded band council resolution carried by consensus in a community meeting to that effect. He says that in recent weeks and months, the First Nation has been in direct dialogue with the Ontario Ministry of Northern Development and Mines to begin discussions on how to work through a framework that details the legal requirements of consultation in the exploration phase. All other mining potential matters are considered non-starters at this time for the Serpent River First Nation.

Directly in the Serpent River First Nation traditional territory there is a list of other developments ranging from cottage lot development, quarry projects, forestry, existing and proposed hydro projects and other competing interests to access crown lands. Day says that the Ontario government has been anticipating working with Serpent River First Nation on consultation and accommodation with respect to some of these projects but goes on to caution that, “all of these issues are not the same. It will take a much more consistent effort by Ontario to reach meaningful resolve on their duty to consult than what we have seen in recent years since the Haida, Taku and Mikisew decisions. There’s a province and nation-wide pressure-cooker type situation ready to implode in First Nation-Government relations with regard to unresolved traditional lands and treaty entitlement disputes, so I think most would agree; its time for action!” Day says that at best, interim regulatory changes might help but urges Ontario and Canada to get their act together on legislative change that respects and legitimizes Anishnabek Law.

In his final comments, Chief Day said that “Anishnabek Leaders are now becoming more adamant that the implementation of Treaties is going to be the steam to get these issues to the next level.” Ending the discussion, Day says that the Robinson Huron Treaty of 1850 requires a formal approach based on collective rights and efforts by First Nation communities. He calls on government and industry to a table where it won’t be just one First Nation having to deal with issues alone; unity among First Nations in the Robinson Huron Treaty is being considered more than ever before.