Another Mobilization Launched in Brazil 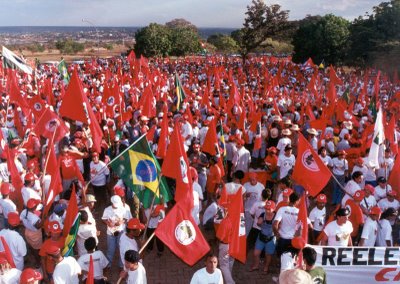 Three months after a week-long mobilization against corporations, Via Campesina and the Landless Workers Movement (MST) launched another mobilization in Brazil last week.

According to the Associated Press, the mobilization started on June 10, with “thousands of landless rural workers invad[ing] dams, railways, plantations and corporate headquarters in a wave of protests across eight Brazilian states.”

In fact, there were actions in 16 states. As noted throughout the official website of the MST:

In Minas Gerais, about 1,500 workers and members of Via Campesina occupied a railway owned by Vail, demanding negotiations be opened with 500 families of a community that will be displaced by the Baguari dam. About 300 People also went to Vale’s headquarters in downtown Rio de Janeiro.

In Para, 3000 MST and others occupied a vast, empty property held by Gabriel Saldanha, a major employer in the region — saying the land could easily provide space for 5000 families.

In Mato Grosso, 300 Via Campesina held a public ceremony in the city of Diamantino, holding discussions with the local population, in schools and on the local radio.

Other protests were organized against CELG (Energy Company of Missouri) in Goiania; Bunge’s fertilization plants in Parana; Walmart in Espírito Santo, plantations owned by Votorantim in Rio Grande do Sul; a Distillery in Sao Paulo; and, of course, the Xingu Hydro Dam.

The majority of the actions were peaceful and non-violent. There was, however, at least one violent repression at a concluding demonstration in Porto Alegre. Via Campesina caught the repression on video. Following the repression, the Executive Director of the National CUT commented (roughly translated)

Peacefully mobilized against corruption in government, in defence of the strengthening of the state and deepening of democracy in the State, we were suppressed with the use of bombs, gas and rubber bullets. The scenes of yesterday are not an isolated case.

Nor is the repression limited to the use of physical violence, as noted yesterday by Da Agência Brasil de Fato. Brazil’s corporate media apparently took some hefty steps to repress the truth; characterizing the protests as criminal and even calling for violence. One paper in Brazil even compared the MST to the KKK.

And of course, they said nothing about the reasons behind the protests – not about the displacement caused by the dams, about the impossible prices of food and electricity, about the agrarian policies that are destroying small farmers throughout Brazil, and certainly not about the need for corporate accountability.