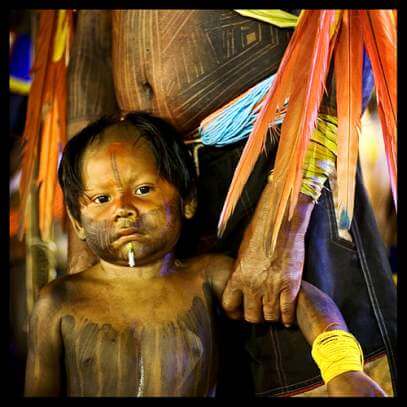 Year after year, as the Pataxó Hã-Hã-Hãe and others indigenous to Brazil work to reclaim their lands, they are one by one assassinated. It is sad that those responsible do not understand that for every one person, there is also one leader. Or perhaps they do?

From brazzilmag.com – The Brazilian Pataxó Indian Hã-Hã-Hãe Aurino Pereira dos Santos, 40, married and without children, was shot and killed on May 19, 2007 in the region of Taquari, municipality of Pau Brasil, state of Bahia. His body was found near the Letícia farm, owned by Durval Santana, inside an indigenous area claimed by the Pataxó Hã-Hã-Hãe as theirs.

Aurino dos Santos was an active participant in the struggle of the Pataxó Hã-Hã-Hãe people for recovering their territory. In the region where he was killed, he was one of the leaders of one of the most recent reoccupation actions, which was carried out in the region of Braço da Dúvida and Taquari.

The Pataxó Hã-Hã-Hãe community attended the vigil and burial of Aurino, on May 22, in the Caramuru village in Pau Brasil.

During the ceremonies, chief Ilza Rodrigues said that indigenous leaders would hold a meeting to evaluate the situation and make decisions and proposals in relation to the case. She stressed how concerned she is with the lack of measures on the part of authorities in relation to this additional crime. She also said that she doesn’t want this murder to be another unsolved crime case, without the guilty ones being punished, as so often happens.

The tensions between indigenous people and farmers as a result of land disputes are marked by reoccupations of land areas by indigenous people to recover and defend their territory from the degradation caused by farmers’ activities in them. But they are also marked by judicial and administrative actions.

The most emblematic judicial action in this conflict is an ordinary civil lawsuit to nullify title deeds which was referred to the Supreme Federal Court (STF) 24 years ago and no decision has been made so far about it. The lawsuit, which was proposed and filed by the National Foundation for Indigenous People (Funai), is aimed at nullifying title deeds to land granted by the Government of the state of Bahia to farmers in the 1960s.

The long time it is taking to judge this case contributes to increase the violence. In the 1990s, as a result of the pressure applied by indigenous people through land reoccupation actions, FUNAI implemented administrative actions to indemnify farmers for improvements made in land areas they were evicted from, which was an instrumental action for enabling the Pataxó Hã-Hã-Hãe to live in about 18,000 hectares of their lands today, which is still much less than the 54,100 hectares they claim as theirs. This advance frightened some farmers, mainly the large ones, who don’t even want indigenous people in their region at all. (source)

If you can read spanish, here’s another article