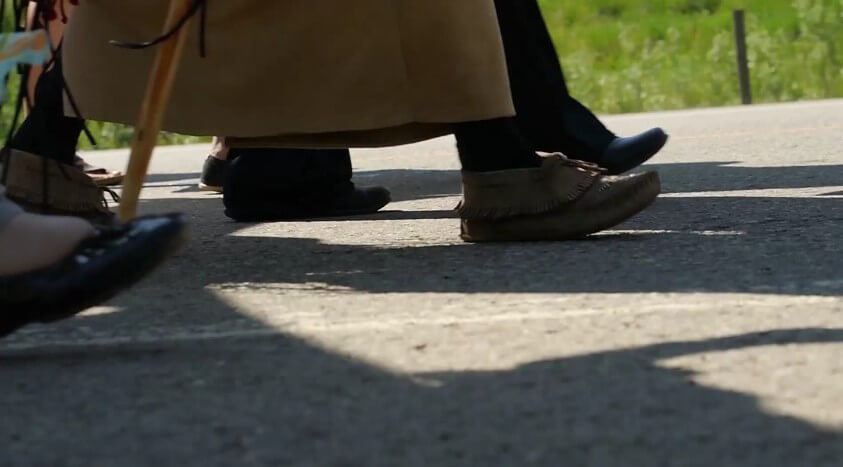 WINNIPEG, MB – On August 3, Anishinaabe walkers and their allies will begin walking on the eastern edge of Treaty 3 territory at Eagle Lake First Nation and proceeding along Transcanada’s proposed Energy East pipeline to Shoal Lake, Ontario.

TransCanada Inc. is proposing to push 1.1 million barrels of diluted bitumen (tarsands oil) from Hardisty, Alberta to St. John, New Brunswick, adding up to 32 million tonnes of greenhouse gases to the atmosphere per year. Converting a 40 year-old natural gas pipeline in Manitoba and northwestern Ontario, Energy East presents inevitable risk of breaks, leaks, and explosions. The 5-day walk is planned by the Grassroots Indigenous Water Defence (GIWD) to draw attention to the threat this project poses to the water and mobilize people in surrounding Anishinaabe communities.

“Transcanada’s pipeline is going through the process of consultation and approvals to push the oil through these lands,” stated GIWD organizer and Grassy Narrows First Nation’s environmental advocate, Judy da Silva, at this year’s World Water Day in Kenora, ON. “These are the kind of serious water issues people need to look at in Kenora and in Treaty 3 if they want to keep the water pristine for the future generations.”

The risk of spills and leaks posed by the Energy East pipeline is of particular concern in Anishinaabek territory of Treaty 3, which has 30% of Ontario’s fresh water and supplies Winnipeg with its drinking water. The rocky and hilly terrain of this region will make it especially hard to reach bitumen spills and leaks, which is why GIWD is organizing to stop Energy East.

“Our ways of life on our Indigenous homelands and our waters are at risk of being contaminated by the oil industry and TransCanada’s Energy East pipeline, which is dangerous for the survival of our children’s and grandchildren’s futures,” states the GIWD brochure for the Anishinaabe Water Walk. “As Indigenous People we have a sacred connection and responsibility to our lands and to our waters. We have a spiritual connection to all life and to our homelands, through our teachings.”

The water walk will be concluding at Iskatewizaagegan, one of the few First Nations in Treaty 3 that has vocally opposed the Energy East pipeline. At a recent Council of Canadians forum on Energy East held in Winnipeg, Chief Fawn Wapioke shared that, “In some of our teachings, what the water means to us is that water is life. When you’re looking at our law of creation it means that in those oil sands, that’s where that oil is meant to be.”

“What kind of place are we leaving for our children? What can we do now today to ensure there is a place for them?” Chief Wapioke, a GIWD supporter, asked the crowd of 300 people.

This spring, the Anishinaabek Grand Council of Treaty 3 passed a resolution that prohibits the transport of bitumen through their territory without free, prior, and informed consent. However, as Indigenous climate campaigner Clayton Thomas-Muller stated at a Kenora forum hosted by GIWD, grassroots mobilization like the Water Walk is essential to saying “no” to Energy East.

“The role that groups like Grassroots Indigenous Water Defence play for our communities is providing a front line of defence for our land, water, human health and collective rights,” stated Thomas-Muller. “They are an expression of community self-determination and provide an important role in supporting our elected leadership in what can be difficult decisions to resist harmful developments like the Energy East Pipeline proposal.” 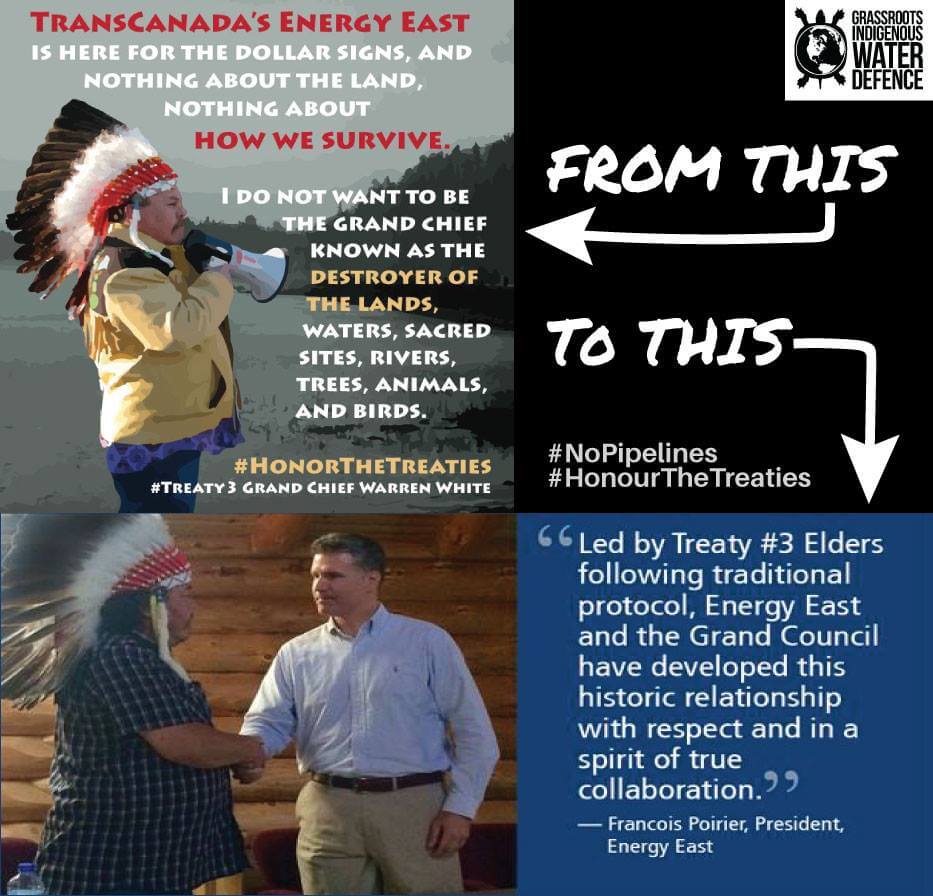 Just recently, TransCanada met and signed a confidential engagement agreement with the Grand Council of Treaty #3. A leaked copy of the Communications and Engagement Funding Agreement revealed $717,000 to be paid to the Council for consultation and environmental assessment on the impacts of the proposed Energy East pipeline. The terms of the leaked document do not preclude First Nations from opposing the pipeline, but it does prohibit any member or other individual group from physical interference with TransCanada facilities or hired workers operating in the project area.

While TransCanada boasts 1700 meetings with First Nations along the proposed pipeline route and attempts to woo First Nation leadership through financial incentives – outside of the meeting with Grand Council of Treaty 3 – members of GIWD made their opposition heard through song and ceremony.

A crowdfunding campaign has been set up to raise money for the walk and donations to GIWD can be made online until August 7. GIWD seeks to involve as many people from surrounding communities as possible and don’t want the cost of food, transport, or shelter to inhibit participation. They are asking people to consider sponsoring meals or the cost of a vehicle as a way to support the Anishinaabe Water Walk from Eagle Lake to Shoal Lake.