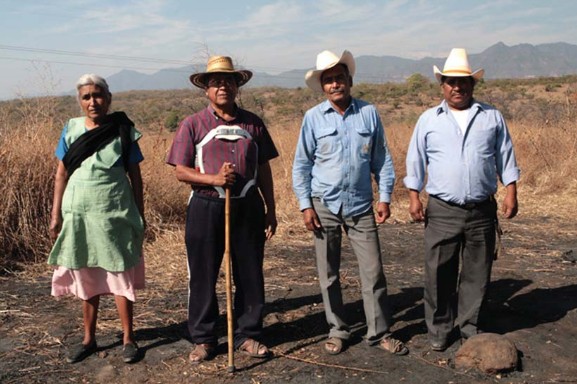 The Ancestral Values We Inherited: Protecting Indigenous Water, Land, and Culture in Mexico

The following is from an interview with Saúl Atanasio Roque Morales, a Xoxocotla indigenous man from the state of Morelos, Mexico. He is a member of the Council of Peoples and the Xoxocotla Drinking Water Association.

Within our indigenous community of Xoxocotla, we continue to hold the ancestral values we inherited. It never crosses our mind to leave them behind. Because in daily life we are always in contact with nature, with our lands, with our water, with our air. We live in harmony with nature because we don’t like the way that modernity is advancing, destroying our territory and our environment. We believe technological modernity is better named a death threat.

We still watch our children chase the butterflies and the birds. We see the harmony between the crops and the land. Above all, we respect our water and we continue to perform ceremonies that give thanks for the water.

There is a ceremony we do together with a group of neighboring peoples at a sacred place. In this ceremony, we predict what the coming season will be like in order to predict the harvest, to know if it will be good or if it’s going to be bad. After, the participants return to the community and share what they observed, joyfully dancing with music, to let the community know about the weather predictions and what the water will be like. It never crosses our mind to leave this tradition behind. On the contrary, we believe that we should keep instilling these values in our children.

And so we have potable water that comes from a spring 12 kilometers away. During the time of the government of Lázaro Cárdenas [1934-1940] the community participated, with pick and shovel, in a 12-kilometer excavation to bring water to the community. The water is very good and very clean. Since that time, we have been the ones that administer and control our water system, without having to be responsible to government authorities.

In more recent times since the 80’s, in the state of Morelos, they wanted to privatize the water. We were not in agreement with this. Together with other communities, we organized and went before the lower house of the state congress in order to protest these laws. We occupied the buildings and the politicians agreed to change the law. In the new law, they included our demand that indigenous peoples can control and administer their water.

But in the past few years, industrial and housing projects have been growing and multiplying, invading crop lands. Crop lands normally serve as a buffer for filtration during the rainy season. They filter water and replenish aquifers that give life to our springs. We’re witnessing an increase in devastation and paving-over of lands and that inhibits normal water filtration. We attribute the lowering of water levels to these activities.

We learned that there were to be construction projects erected, including ones to build [more than 37,000] houses, close to our spring. There are also plans to build a golf course. Other companies are opening up [plant] nurseries. There’s another company that’s devastating a mountain called Montenegro to extract material to produce cement.

[In 2005] we started to speak out against the government’s actions, and they didn’t pay attention. We blockaded the roads, but the government didn’t respect the agreements that resulted from those blockades. For this reason we organized 13 communities to defend the springs. We didn’t get much attention, so we decided to block highways. We did it to communicate our problem, but we were met with repression and some people got wounded. The people also fought back: they made the police run, they destroyed a couple patrol cars, they took arms from the cops and because of this, some of our people were detained.

We agreed to establish a dialogue to find a solution. When the dialogue began, we agreed to lift the blockade. But we warned the government that if they rule on the side of the companies we will continue to fight. This land belongs to us. It is the great heritage of our people and we will uphold the law.

They suspended the first construction project for 2,000 houses, but then the construction company started to build again. We withdrew from the negotiations because they didn’t keep their side of the bargain. Instead, we organized a People’s Congress to get support for our demands. The first congress took place in Xoxocotla with 48 communities. We addressed all the communities’ environmental and ecological concerns. After the congress, we held more protests in Cuernavaca, denouncing all of the socio-environmental injustices facing our state. We’re hoping those 48 communities will double in size.

We’re seeing our lands being devastated and paved over and our water levels lowering. Some communities have gas installations built on them. Others are defending their ecological reserves so their forests don’t keep on being devastated. We’re seeing wastewater contamination because there’s no treatment plant or way to dispose of these waters. We’re all affected by the run-off.

We’re not against people from the outside coming to live with us, but we don’t want them to destroy our ecological surroundings. There are areas where it’s all right to build, but the area where our springs are replenished should be respected so that we can continue conserving our life source.

We see that new housing settlements have water 24 hours per day, while the indigenous people don’t. The constitution says that all natural resources belong to the nation and the nation consists of our people, the indigenous people. The land is the great heritage of our people, but the authorities are protecting the companies because they’re getting paid by them. Part of our movement calls for the entire region to be declared a protected natural area.

Fortunately, we know that our movement has the support of the other peoples. We’ve received positive support and acknowledgement from society and the media about our work to defend our natural resources and the environment.

We know that by organizing our people we can present a united front in the struggle to defend and retain what belongs to us. We won’t allow the government, our authorities or foreign companies, to own or take advantage of our resources.

As long as there’s no justice, we’ll keep fighting. That’s our manifesto. We won’t let the government or foreign companies own or exploit our resources. We say that the fight is not only for us, it’s for all of humanity because we all need nature.

Copyleft Other Worlds. You may reprint this article in whole or in part. Please credit any text or original research you use to Tory Field and Beverly Bell, Other Worlds.