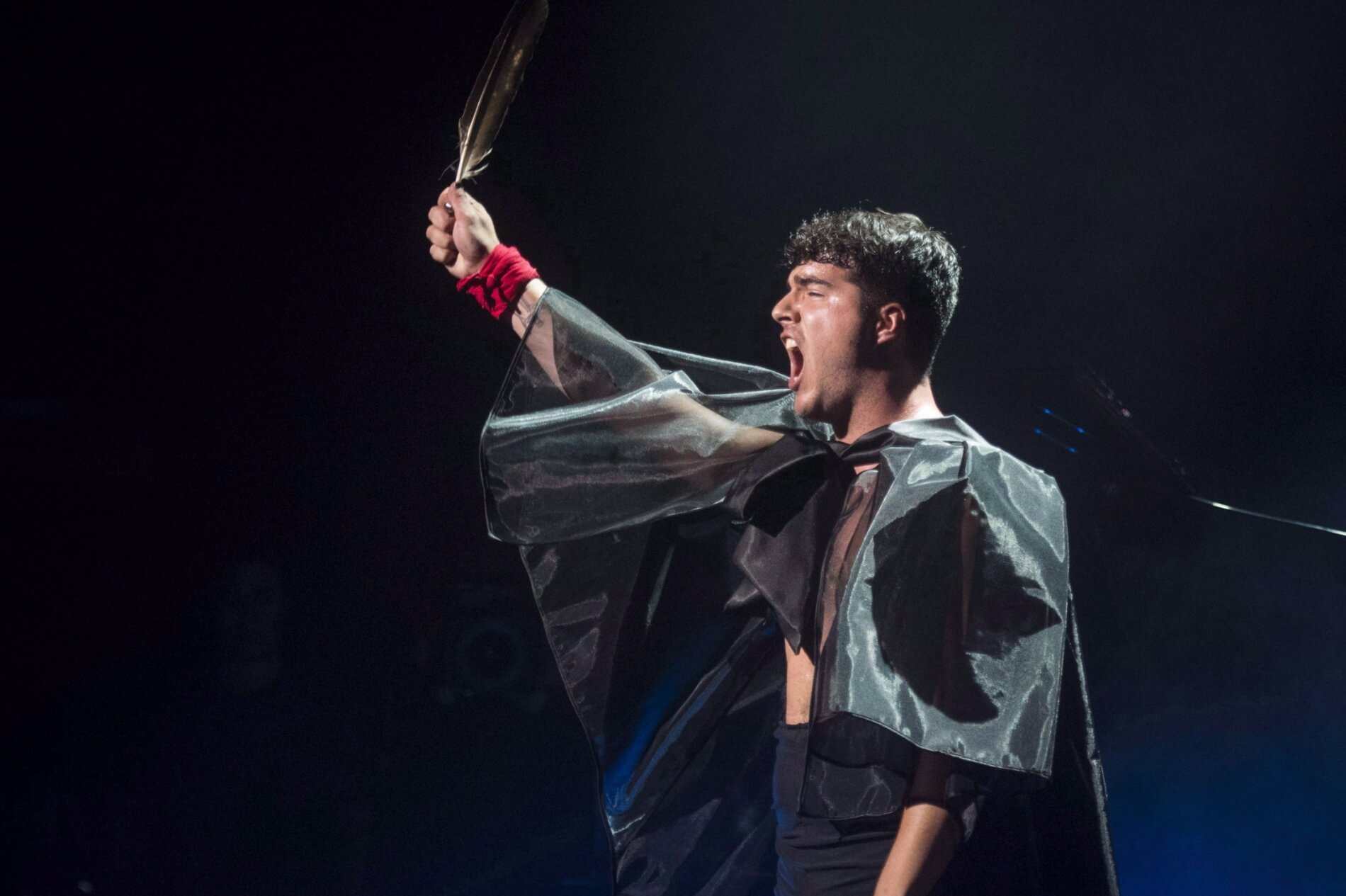 Ancestral languages are essential to Indigenous identities in Canada

Language is a complex structure. Here, Jeremy Dutcher performs during the Polaris Music Prize gala in Toronto on Sept. 17, 2018. Dutcher’s award-winning album Wolastoqiyik Lintuwakonawa is in the Wolastoqey language. THE CANADIAN PRESS/Tijana Martin
Support our journalism. Become a Patron!

Although these latest protests are centred around jurisdiction and funding, the fundamental issue for Indigenous peoples is support for an essential part of their identity.

My work in the area of Indigenous education and languages leads me to believe what is core to the concern for language support is the meanings and narratives that are reflected in language.

The breadth of issues and potential initiatives reflected in the 94 Calls to Action of the Truth and Reconciliation Commission of Canada (TRC) cover many areas that are germane to the well-being of Indigenous peoples.

The general aim of reconciliation that has emerged from the activities of the TRC is the development of a new relationship amongst Indigenous and non-Indigenous peoples in Canada. Such a new relationship must acknowledge harms of the past and their impact into present.

It is now clear that the reconciliatory journey must recognize, affirm and follow up on prescriptions for change that aim to rectify many wrongs affecting many areas of the Indigenous peoples’ experience.

One of those areas that is of particular interest to educators at numerous levels is that of language and culture.

The TRC Call to Action 14 called on the federal government to enact an Aboriginal Languages Act and it put forth the necessary premise that Indigenous languages are “a fundamental and valued element of Canadian culture and society.”

Language is not only the capacity that allows us to communicate ideas, but also a complex structure in which meaning is stored.

When one speaks of Indigenous knowledge, one may feel they readily understand the contents of that knowledge when it is said to be “translated” in a lingua franca such as English.

But really what one understands is what linguists may refer to as translation: one understands meaning only in reference to other meanings based on her or his pre-existing words.

This means that the efforts to understand aspects of the Canadian Indigenous experience through Indigenous languages frequently places English as the principal point of reference.

Is there an app for that?

This situation may be understood by considering how Indigenous language apps on smart phones are used. Consider a person who is not a speaker of Kanienke’ha (Mohawk) and wishes to know what the word for “Thursday” is in Kanienke’ha.

One may simply type in the English word “Thursday” into a Kanienke’ha language app and this may reveal the word Okaristiiahne. A person need only engage in this process once for an understanding would emerge that the term Okaristiiahne means Thursday.

In doing so, our hypothetical language app user has put English at the forefront of the process for understanding what the word means. One might say upon completing this episode of app use, “This is the word that means Thursday in my language.”

What is of concern here is meaning. The word Okaristiiahne does not literally mean Thursday. This word may be best understood as meaning “Day of the Eucharist” and reflects the influence that the Catholic faith had and still has in the communities for which Kanienke’ha is used. And, Okaristiiahne is not the only Kanienke’ha word for Thursday. Kaieriaton, which means “the fourth day,” may be used as well, but in my community, not so much.

One may regard this observation of meaning to be trivial — after all, the word Okaristiiahne may be used to represent the day of the week for which the word Thursday is used in English. However, if one accepts the notion that a language stores meaning, then there is a liability for an Indigenous language such as Kanienke’ha when an emphasis on translating particular words in isolation while putting English at the forefront leads one to believe that Okaristiaahne means “Thursday.”

‘Education will get us out’

Understanding meaning in an Indigenous language and how it may provide cultural and historical knowledge is essential to understanding for an Indigenous person’s own cultural identity. It is often said that when a language disappears, so too does a part of a culture.

In leading the work of the TRC, then Commissioner Murray Sinclair frequently said of the problems of Indian residential schools:

There may be little doubt that the education of all people is an important part of the trajectory toward reconciliation.

In an effort to support reconciliation in a manner that is responsive to the TRC’s Calls to Action and specifically with those of language and culture, researchers and educators have developed school and community programming such as conversational language lessons or cultural infusions into curricula.

Some tensions in approaches

Research into educational programming on language and culture has revealed, amongst other things, some tensions in approaches with teaching Indigenous languages.

Frequently used classroom resources for language such as language dictionaries and community-developed curricula, as well as resources for supplementary learning through technology (e.g., the smart phone apps) may have undesired consequences for language syntax and development due to the lexicographic imperatives for translation mentioned above.

In regard to language and cultural programming, in my research I have found that although some schools are adequately developing curriculum to teach Indigenous language and culture or knowledge, challenges persist. Perceived limited opportunities in things like hiring Indigenous teaching staff have led to an acknowledgement of the difficulties of offering such programming in urban educational environments.

The efforts to bring Indigenous knowledge into classrooms has led many to consider what constitutes such knowledge — efforts that some believe may be considered by school staff internally. However, it has become clear that the inclusion of Indigenous peoples with such knowledge in these conversations is essential.

The manner in which cultural meaning may be represented in school programming should not be an afterthought.

We should ask ourselves: What can we learn of Indigenous people through enhanced programming? What narratives can we acquire by exploring Indigenous languages? How may our relationships be improved by recognizing and affirming the cultural elements and mores of Indigenous people?

It may also be imperative to consider what the aforementioned TRC Commissioner Murray Sinclair stated when he called for all people committed to reconciliation to ask ourselves as a normal matter of course in the reconciliatory journey: Where do I come from? Where am I going? Why am I here? Who am I?

This article was originally published my our media partner, The Conversation. It has been re-published at IC under a Creative Commons License.