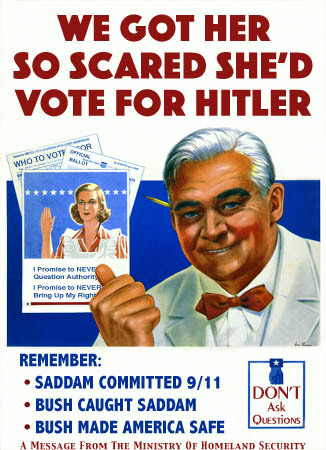 An examination of logical fallacies

I’ve been meaning to post this for a while now, and thought it was about time I did so. This page is a look at “logical fallacies:” what they are, how they are used, and what we can do to overcome them.

A logical fallacy is defined as errors of logic in an argument that has nothing to do with the actual argument, but they are much more than that. In everyday life, they’re linguistic and emotion-fuelled “tricks” used to manipulate people, sell products, win arguments, spin the truth, and even convict people in courts of law.

Incidentally, propaganda completely depends on logical fallacies —and the success of fallacies, like propaganda itself, depends completely on our adherence and refusal to confront it rationally. On occasion, truth will even be rendered completely irrelevant as it’s made into an opinion, while a belief comes to be absolute fact…

“All white people smell bad” for example. Simply put, that’s absurd. They don’t all smell bad, but even if they did how would they know? Have they met and smelled every white person?

It’s kinda silly to even ask these questions, but if a fallacy is being used, it is likely a cornerstone to the discussion. That’s been my experience atleast.

In any case, it’s a good thing to be aware of logical fallacies and how to confront them, especially as we all continue to move forward, politically speaking… Equally so, it is difficult to avoid using them and so avoid entrapping and misleading ourselves, if we don’t first know what they are.

Each fallacy is described in the following format:

Each of these fallacies is characterized by the illegitimate use of a logical operator in order to distract the reader from the apparent falsity of a certain proposition.

Definition: A limited number of options (usually two) is given, while in
reality there are more options. A false dilemma is an illegitimate use of the “or” operator.

Examples:
1. Either you’re for me or against me.
2. America: love it or leave it.
3. Either support Meech Lake or Quebec will separate.
4. Every person is either wholly good or wholly evil.

Proof: Identify the options given and show (with an example) that there is an additional option.

Examples:
1. Since you cannot prove that ghosts do not exist, they must exist.
2. Since scientists cannot prove that global warming will occur, it probably won’t.
3. Fred said that he is smarter than Jill, but he didn’t prove it, so it must be false.

Proof: Identify the proposition in question. Argue that it may be true even though we don’t know whether it is or isn’t.

In order to show that a proposition is unacceptable, a sequence of increasingly unacceptable events is shown to follow from it. A slippery slope is an illegitimate use of the “if-then” operator.

Examples:
1. If we pass laws against fully-automatic weapons, then it won’t be long before we pass laws on all weapons, and then we will begin to restrict other rights, and finally we will end up living in a communist state. Thus, we should not ban fully-automatic weapons.
2. You should never gamble. Once you start gambling you find it hard to stop. Soon you are spending all your money on gambling, and eventually you will turn to crime to support your earnings.
3. If I make an exception for you then I have to make an exception for everyone.

Two otherwise unrelated points are conjoined and treated as a single proposition. The reader is expected to accept or reject both together, when in reality one is acceptable while the other is not. A complex question is an illegitimate use of the “and” operator.

Examples:
1. You should support home education and the God-given right of parents to raise their children according to their own beliefs.
2. Do you support freedom and the right to bear arms?
3. Have you stopped using illegal sales practises? (This asks two questions: did you use illegal practises, and did you stop?)

Proof: Identify the two propositions illegitimately conjoined and show that believing one does not mean that you have to believe the other.

Appeals to Motives in Place of Support

The fallacies in this section have in common the practise of appealing to emotions or other psychological factors. In this way, they do not provide reasons for belief.

The reader is told that unpleasant consequences will follow if they do not agree with the author.

Examples:
1. You had better agree that the new company policy is the best bet if you expect to keep your job.
2. NAFTA is wrong, and if you don’t vote against NAFTA then we will vote you out of office.

The reader is told to agree to the proposition because of the pitiful state of the author.

Examples:
1. How can you say that’s out? It was so close, and besides, I’m down ten games to two.
2. We hope you’ll accept our recommendations. We spent the last three months working extra time on it.

Proof: Identify the proposition and the appeal to pity and argue that the pitiful state of the arguer has nothing to do with the truth of the proposition.

The author points to the disagreeable consequences of holding a particular belief in order to show that this belief is false.

Example:
1. You can’t agree that evolution is true, because if it were, then we would be no better than monkeys and apes.
2. You must believe in God, for otherwise life would have no meaning. (Perhaps, but it is equally possible that since life has no meaning that God does not exist.)

Proof: Identify the consequences to and argue that what we want to be the case does not affect what is in fact the case.

Loaded or emotive terms are used to attach value or moral goodness to believing the proposition.

Examples:
1. Right thinking Canadians will agree with me that we should have another free vote on capital punishment.
2. A reasonable person would agree that our income statement is too low.
3. Senator Turner claims that the new tax rate will reduce the deficit. (Here, the use of “claims” implies that what Turner says is false.)
4. The proposal is likely to be resisted by the bureaucrats on Parliament Hill. (Compare this to: The proposal is likely to be rejected by officials on Parliament Hill.)

Proof: Identify the prejudicial terms used (eg. “Right thinking Canadians” or “A reasonable person”). Show that disagreeing with the conclusion does not make a person “wrong thinking” or “unreasonable”.

Examples:
1. If you were beautiful, you could live like this, so buy Buty-EZ and become beautiful. (Here, the appeal is to the “beautiful people”.)
2. Polls suggest that the Liberals will form a majority government, so you may as well vote for them.
3. Everyone knows that the Earth is flat, so why do you persist in your outlandish claims?

The fallacies in this section change the subject by discussing the person making the argument instead of discussing reasons to believe or disbelieve the conclusion. While on some occasions it is useful to cite authorities, it is almost never appropriate to discuss the person instead of the argument.

The person presenting an argument is attacked instead of the argument itself. This takes many forms. For example, the person’s character, nationality or religion may be attacked. Alternatively, it may be pointed out that a person stands to gain from a favourable outcome. Or, finally, a person may be attacked by association, or by the company he keeps.

Proof: Identify the attack and show that the character or circumstances of the person has nothing to do with the truth or falsity of the proposition being defended.

While sometimes it may be appropriate to cite an authority to support a point, often it is not. In particular, an appeal to authority is inappropriate if:
1. the person is not qualified to have an expert opinion on the subject,
2. experts in the field disagree on this issue.
3. the authority was making a joke, drunk, or otherwise not being serious

A variation of the fallacious appeal to authority is hearsay. An argument from hearsay is an argument which depends on second or third hand sources.

Examples:
1. Noted psychologist Dr. Frasier Crane recommends that you buy the EZ-Rest Hot Tub.
2. Economist John Kenneth Galbraith argues that a tight money policy s the best cure for a recession. (Although Galbraith is an expert, not all economists agree on this point.)
3. We are headed for nuclear war. Last week Ronald Reagan remarked that we begin bombing Russia in five minutes. (Of course, he said it as a joke during a microphone test.)
4. My friend heard on the news the other day that Canada will declare war on Serbia. (This is a case of hearsay; in fact, the reporter said that Canada would not declare war.)
5. The Ottawa Citizen reported that sales were up 5.9 percent this year. (This is hearsay; we are not n a position to check the Citizen’s sources.)

Proof: Show that either (i) the person cited is not an authority in the field, or that (ii) there is general disagreement among the experts in the field on this point.

A variation on this fallacy is the appeal to rumour. Because the source of a rumour is typically not known, it is not possible to determine whether to believe the rumour. Very often false and harmful rumours are deliberately started in order to discredit an opponent.

Examples:
1. A government official said today that the new gun law will be proposed tomorrow.
2. Experts agree that the best way to prevent nuclear war is to prepare for it.
3. It is held that there are more than two million needless operations conducted every year.
4. Rumour has it that the Prime Minster will declare another holiday in October.

The manner in which an argument (or arguer) is presented is taken to affect the likelihood that the conclusion is true.

Examples:
1. Nixon lost the presidential debate because of the sweat on his forehead.
2. Trudeau knows how to move a crowd. He must be right.
3. Why don’t you take the advice of that nicely dressed young man?

Continue reading the list of logical fallacies here; or
go the table of contents of Stephen’s guide