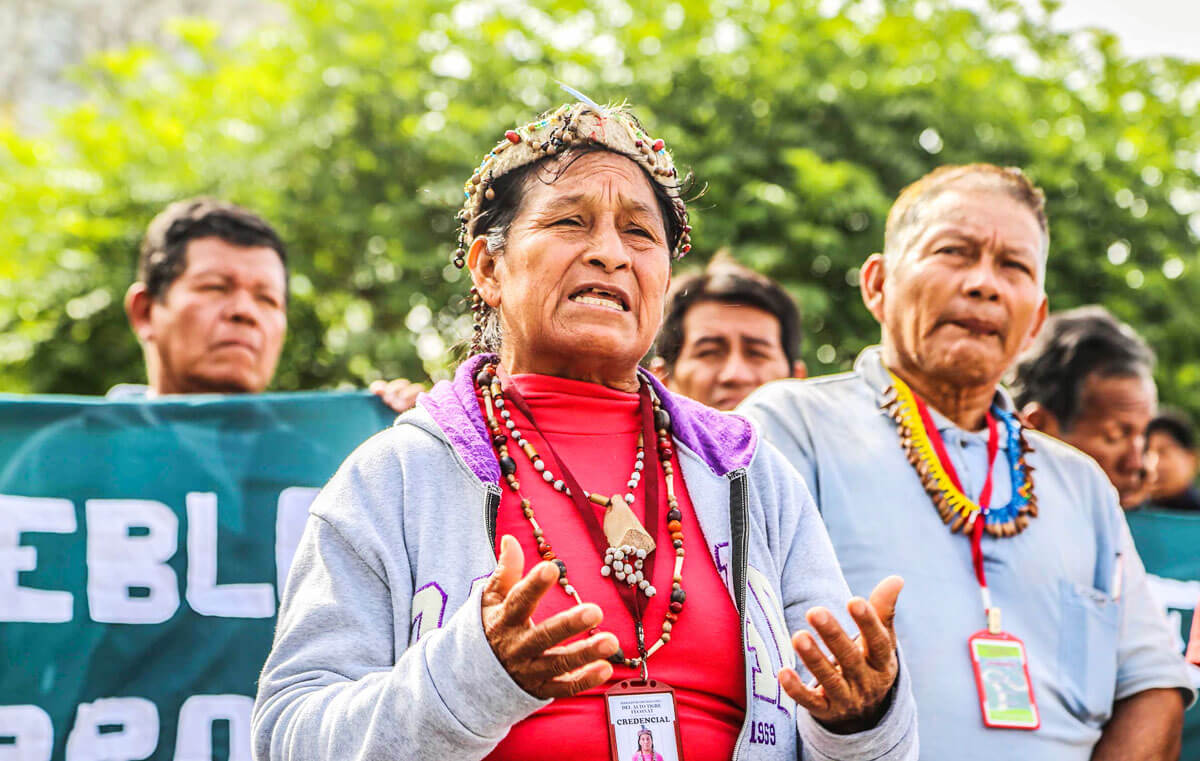 Amazonian indigenous peoples demand the attention of the government for the contamination caused by oil spills. / Arturo Champa
Support our journalism. Become a Patron!

In 2016, the presence of oil in the Amazonia region marked a before and after in the environmental history of Peru. The basins of the Marañón River (Amazonas region) and the Morona River (Loreto region) have been left exposed to an imminent danger of contamination, along with a large number of indigenous communities who depend on their waters.

On Sep. 1 of last year, more than 70 communities located in five Amazonian basins (Tigre, Marañón, Pastaza, Corrientes and Chambira) blocked the Marañón River in protest for the constant spills caused by leaks in the North Peruvian Pipeline and closed river traffic to oil transporting vessels along with other commercial vessels, while the government of President Pedro Pablo Kuczynski ignored the situation.

According to the Environmental Assessment and Control Agency (OEFA), 13 oil spills occurred in 2016 alone, dumping thousands of barrels of oil into the waterways.

Environmental authorities put the blame for the spills on the deteriorated North Peruvian Pipeline, owned by Peru’s state–run oil company Petroperu. Constructed in the 70s, the pipeline transports the oil extracted from the Peruvian Amazon region from Station 1, in San José de Saramuro, Loreto, along 854 kilometers (530 miles) to the Bayóvar terminal, in the northern coast.

Although many specialists and OEFA have confirmed the lack of maintenance to the pipeline, Petroperu has maintained that the spills are caused by vandalism perpetrated by “unscrupulous” people, and also by “natural causes” (lightning that hit directly on the pipeline).

According to anthropologist Frederica Barclay, the history of oil activity in the region started in the 70s, during the military government (1968-80), with the approval of an oil law meant to stimulate its exploitation. However, it lacked the proper environmental regulation and it was not paired with legislation aimed at defending indigenous rights.

Blood of the land

“Did anyone, by any chance, asked the communities if they wanted the pipes to cross their territories?,” said Lawyer Henry Carhuatocto, President of the Institute for the Legal Defense of the Environment and Sustainable Development (IDLADS), to Latinamerica Press. “Let me give you an example; all of us in Lima know that the the water tubes have to be replaced every so often to prevent the accumulation of sediment in the pipes. However, imagine what the condition of the pipes that transport the oil for so many kilometers above the ground is; pipes that should have been given proper maintenance for the past 43 years. Is it not obvious that they are at a point of collapsing? What is more important, to lose money or lose the lives of hundreds of indigenous people?”

The spills “are proof that the state overlooks irresponsible extractive activity, and on top of that, it does so in a way that discriminates against the indigenous populations because it does not recognize their rights to reap the benefits for the easements of their lands,” Carhuatocto added.

The first well drilled in the Amazonia was located in the town of Capirona, in the basin of the Corrientes River, as recalled the indigenous leader Henderson Rengifo Hualinga, President of the Inter-Ethnic Association for the Development of the Peruvian Jungle (AIDESEP), who was born and raised in that basin.

In a conversation with Latinamerica Press, Rengifo commented that for the indigenous populations, oil is like the blood of the land where they live.

“But it also represents a memory of many negative impacts to the environment and to human health. All the profit from the oil has remained in the capital cities and has never reached the community,” Rengifo maintains. “I want someone to tell me what important benefits the indigenous communities have received along these 40 years of oil activity. None; oil is not synonymous of development.”

After 117 days of protests, on Dec. 15, the indigenous communities reached a 19 point agreement with the government, which includes “the implementation of an integral development plan based on the respect for the life of the towns affected by the oil activity, and a joint search (government, company and indigenous community) for intercultural dialog in order to not make the same mistakes as of those in the past in the area,” explained Jorge Pérez, President of the Regional Organization of Indigenous Peoples of the Eastern Amazon Region (ORPIO).

The comprehensive development plan, being prepared by a team of 50 state specialists who belong to the ministries of Education, Labor and Social Inclusion, Health, Housing, the Environment, and Defense, working together with the affected communities, is expected to be completed by mid-February.

Rengifo assures that “it has been thanks to the indigenous struggles that we have been changing the environmental regulation [in the country]. They have provided us with compensation for the environmental damage; however, the communities did not have a plan at that time, so we have had to copy how the local and regional governments proceed in these situations.”

“Schools, health centers and sport courts were built with the money received from the company, but that is not the obligation of the community; it is of the state,” Rengifo says.

According to the indigenous leader, some of the funds provided directly were also used in some cases to speed up the formalization process of their communities (recognition, titling and expansion), as government officials claimed not to have the necessary resources to go to the communities that requested their deeds or ownership papers.

To the question, what would be an alternative to oil?, Rengifo considers that one must work towards the so called productive diversification that allows to have other sources of income, through bio-business, tourism, fishing, agro-forestry.

“The state must guarantee the capacity building in these issues to the community itself,” he says.

While the signing of the agreements was received with fanfare, the indigenous representatives claim to be vigilant for compliance from the executive branch. Petroperu, on their part, has implemented a contingency plan that includes the transport of trained personnel to take action and control the situation in case a spill takes place. —Latinamerica Press.

This article was originally published at Latinamerica Press.