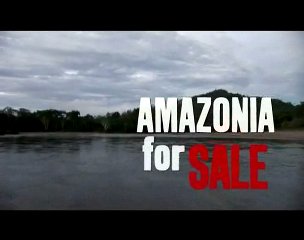 Amazonia for Sale is a new documentary on the Awajun People and their struggle to protect their ancestral territory.

Approximately 35 minutes in length, Amazonia for Sale tells the story of the Awajun Peoples, who, like so many other Indigenous People around the world, are struggling to preserve their land, protect their way of life, and defend their dignity and rights in the Peruvian Amazon.

The Awajun struggle came into full view almost exactly 9 months ago today, on June 5, 2009; but it is one that goes back hundreds of years, to a time when the Incans were making their move to empire.

Working together, the Awajun, who are also known as the Aguaruna, repeatedly stopped the Incans from invading their territory.

The success was repeated about 100 years later, some time after the Spanish Conquistadors encountered the Awajun and established a few of their own settlements. Once again, the Awajun stood up and forced out the invaders.

Similarly, the Church never managed to get a foothold on the Awajun way of life, ensuring the Peoples memory would remain intact for future generations.

Today, the Awajun People are standing up once again, as the film Amazonia for Sale will show. And while their strategy may have changed with the times, this time, the Awajun say, they will remain standing as permanent defenders of the Amazon.

Amazonia for Sale was produced by Ore Media, the International Work Group for Indigenous Affairs (IWGIA) and the Organization for the Development of Border Communities of the Cenepa River (ODECOFROC), a group made up of 56 Awajun and Wampis communities.

Alternatively, you can watch the film at http://www.dailymotion.com/video/xcdem0_amazonia-for-sale_news

Thanks to Amazonas Indígena.