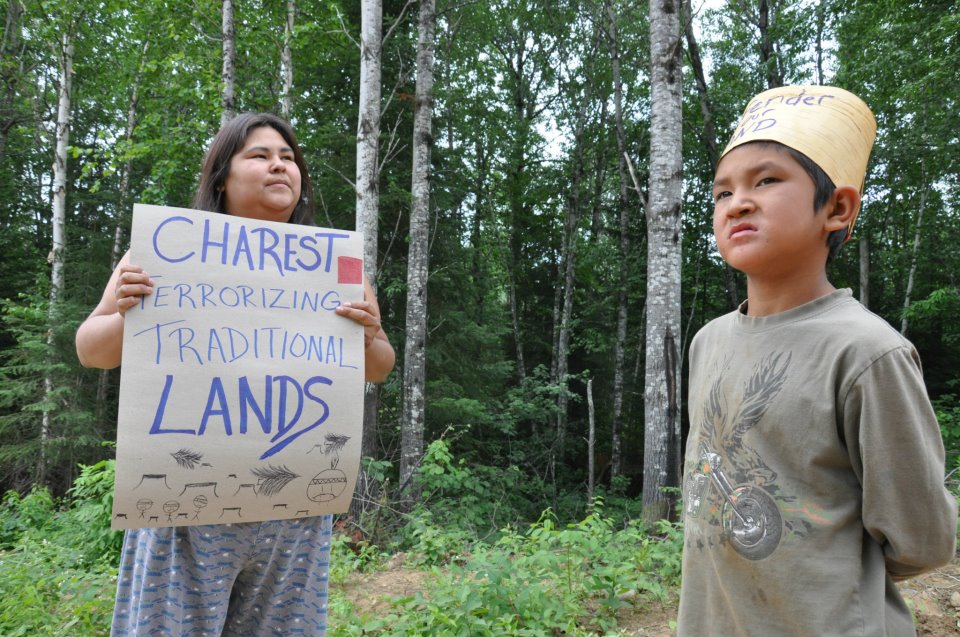 The logging area in question is near Poigan Bay, Quebec, within territory that includes Algonquin sacred sites and important moose hunting grounds.

In a community letter drafted by Algonquin elder Gabriel Wawatie sent on July 4, 2012, to Quebec Premier Jean Charest, Wawatie writes, “As one of the main harvesters, I was not properly consulted nor provided a written consent to this logging within our territory.”

Wawatie’s letter continues: “This clearly demonstrates your ministry’s lack of respect of the highest court ruling on the duty to consult and accommodate First Nations,” referring to the Supreme Court ruling on Haida Nation vs. British Columbia Ministry of Forests. “Therefore we are requesting that you cease logging operations in our territory.”

Another letter was sent to to the Quebec Ministry of Natural Resources on July 9, 2012.

The government itself holds blame as the Ministry of Natural Resources office in Maniwaki, Quebec, issued permits for the logging to take place without following the proper consultation process with land stakeholders.

On Tuesday July 10, 2012, the Sûreté du Québec communicated a message to the demonstrators that the company, “did obtain a legalized right to cut trees in the bush.”

The remote community of Mitchikanibikok Inik First Nation, five hours north of Montreal, charge that both the logging company and Quebec government have so far ignored repeated demands for a fair consultation process, even though such community consultations are supposed to be enshrined in the resource-sharing agreement signed by both the federal and provincial governments.

According to the Barriere Lake solidarity group, “This Trilateral Agreement is a contract between the Federal Government, the Provincial Government (Quebec) and the Algonquins of Barriere Lake (ABL) that deals with land use of 10 000 km2 of land traditionally inhabited and used by ABL. It is an alternative to Canada’s preferred negotiation policy, called the “Comprehensive Land Claims.

This negotiating process forces First Nations to extinguish their Aboriginal rights and title upon settlement, to give up communal land rights for private property ownership, and to shoulder expensive legal and land use mapping costs that eventually get docked from meager settlements.

Both the provincial and federal governments have dragged their heels in implementing this agreement, going so far as to deny its legitimacy as a contract and orchestrating coups of the customary government in the ABL community, sowing internal foment.”

This act of ecological aggression and blatant disregard for treaty rights prompted the small community to take action.

This is not the first time that the Algonquins of Barriere Lake have had to defend their traditional territory.

While the situation has been negotiated down as of Wednesday July 11, 2012, tensions still remain high between community members and the Sûreté du Québec and the protest camp remains.

On June 5 2012, Norman Matchewan of the First Nation of Mitchikanibiko’inik was acquitted on what community members alleged all along were politically motivated charges. Matchewan was acquitted of mischief and obstruction of justice stemming from a 2009 blockade protecting his people’s territory from illegal logging.

“Too many native peoples are criminalized for defending their land,” said Matchewan following the acquittal, “Today is a big victory for our community. We will not be intimidated by trumped up legal charges and court battles. We will always protect our land and custom for our future generations.”

Also at stake were permits for the same logging site in Barriere Lake territory issued by the Maniwaki Ministry of Natural Resources office. Resolute Forest Products lost the case when one its foreman was caught lying on the stand.

During the trial, Vincent Larin, of the Quebec Ministry of Natural Resources, admitted on the stand that logging permits were issued without any consultation by his Ministry of the family groups whose territories were being logged. Moreover, after first claiming that the cutting permits could not be altered once they were electronically signed and entered in the Ministry’s computer system, he presented the Court with a cutting permit that was substantially different than the version that had been disclosed to the defense.

A group of Barriere Lake Algonquins are still camped out at Poigan Lake, Quebec for almost a week now, determined not to leave the site until Resolute Forest Products agrees to stop clear-cut logging their unceded territory and engage in a meaningful consultation process with the community.

Please see this link to learn more about how you can help this crucial struggle for lands rights and Indigenous self-determination.