(Kitiganik, Algonquin Territory/October 10, 2016) As part of the National Indigenous Day of Action the Algonquins of Barriere Lake are placing an Information Toll on Highway 117, which runs through their ancestral territory, recognized in 1991 by a Trilateral Land Management Agreement with Canada and Quebec.

A junior mining company, Copper One, intends to begin drilling on the territory within days and within the La Verendrye Wildlife Reserve. The Ministry of Natural Resources is allowing them to proceed, without any consultation or transparency.

In June 2016, while the Council was negotiating a Draft Implementation Agreement with Quebec to implement the 1991 and 1998 Agreements the Quebec government stealthily lifted the moratorium on mining on their ancestral (and current-use) Trilateral Agreement Territory, which had been in force since 2011. 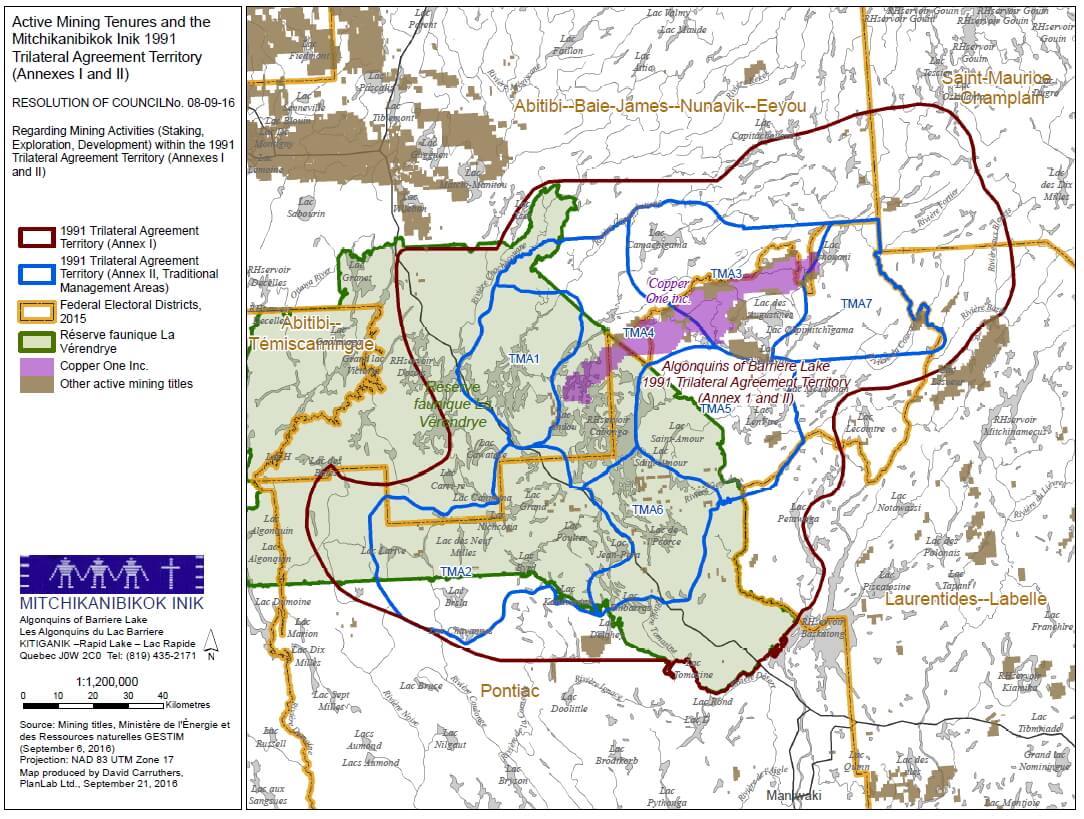 The moratorium on mining activities was lifted unilaterally by the Quebec Ministry of Energy and Natural Resources without any prior advice to, or consultation with, the Algonquin Peoples’ as directed by the Supreme Court of Canada in recent case-law.

In August, 2016, representatives of the Algonquin Peoples’ had specifically asked for confirmation from the Special Representative of Quebec, Mr. Mario Gibeault, that no mining activities were contemplated on the Seaman forestry sector located on their ancestral (and current-use) Trilateral Agreement Territory, and had obtained written confirmation on August 6, 2016, that no mining activities were contemplated.

As a result of the lifting of the moratorium, the mining company Copper One announced immediately after that it was preparing to start mining activities on their ancestral (and current-use) Trilateral Agreement Territory.

Mining activities are completely incompatible with both the terms and intent of the Trilateral Agreement of 1991, the Bilateral Agreement with Quebec of 1998, and the 2006 Joint Recommendations from Special Representatives of Quebec and Barriere Lake, which is to ensure the continuation of our Algonquin Peoples’ traditional activities and the sustainable use of renewable resources, the very reason the moratorium was imposed five years ago, paradoxically the mining activities contemplated are to take place within Quebec’s largest Wildlife Reserve.

Barriere Lake Councillor and Spokesperson, Norman Matchewan stated “We are urging all those who use and appreciate the land, waters, fish and wildlife of this area – those with whom we share our territory – to join us in opposing a new, and more damaging type of development here. We will be reaching out to like-minded groups across Quebec and beyond to work with us to ensure the exploration activities Copper One has in mind do not happen. We invite everyone to join us in this effort. Rest assured, we will do what we must to protect the land.”