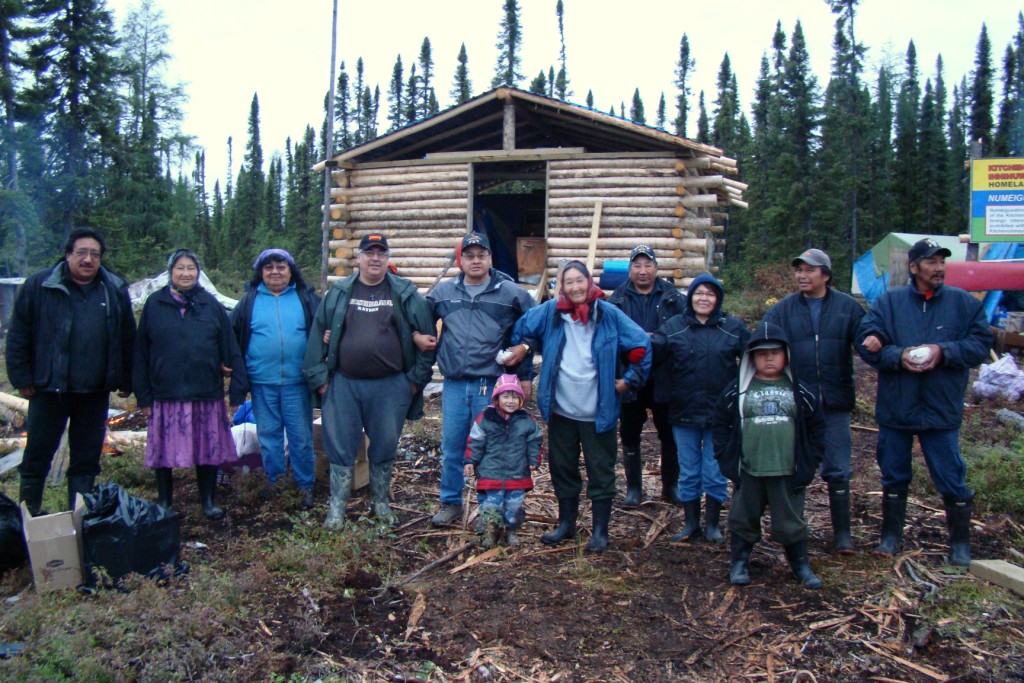 SEPTEMBER 1 – A quick note… Platinex never managed to land on Nemeigusabins Lake. Chief Donny Morris got in their way when they tried to touch down. While this is great news, it’s really just a temporary success. Afterall, Platinex has stated an “unwavering commitment” to move ahead with the mine ( without it they’ll go bankrupt, they say).

Further updates, correspondence and recent news is available at kitelecom.myknet.org and http://kitchenuhmaykoosib.com

It seems the Canadian mining company Platinex is going to have another go at entering KI territory. The company is expected to arrive sometime today, August 26, with a police escort. Members from the community, Kitchenuhmaykoosib Inninuwug (KI), have gathered at the mining site to peacefully demonstrate against the company’s presence.

This news comes 17 months after Chief Donny Morris and 5 other members of KI First Nation were sentenced to six months in prison for opposing the company’s proposed platinum mine at Nemeigusabins Lake. Several months earlier, KI physically escorted Platinex officials off their territory for the company’s high-handed approach during “consultations”.

At the time, KI was still trying to recover from the $10 Billion dollar lawsuit that Platinex filed against them in 2006, for getting in the way of the mine. The lawsuit fell through, but not before leaving KI utterly bankrupt. The community has still not fully recovered from the lawsuit.

See below for KI’s most recent press release, dated August 25.

Councillor McKay of Kitchenuhmaykoosib Inninuwug said “I would like to say that in response to Minister Gravelle’s comments to the press yesterday that he was trying to organize meetings between Platinex and Kitchenuhmaykoosib Inninuwug. He said he is trying to escape responsibility. That approach is wrong. We do not want to meet with Platinex. We want to meet with the Premier. It is Ontario that gave Platinex the lease. It is Ontario that must cancel those leases because Ontario did not give our free, prior and informed consent to issue those leases.”

Sam McKay said “Cheif Donny Morris sent a letter to Premier Dalton McGuinty on August 17, 23009 pressing for a meeting but we have heard nothing back yet. The Premier is going to have to get involved if Bill 173 on Mining Act Amendments is going to be taken seriously. The Premier needs to see first hand the weakness of his proposed legislation in real practical terms so he can get it right.”

The Ontario Provincial Polices (OPP) said that Platinex is going to postpone their trip to KI territory until tomorrow because of weather conditions.

Councillor Sam McKay said “Our Creator has spoken. Platinex had to postpone their trip to Nemeigusabins Lake, the proposed Platinex mining site because of the thunderstorm we had last night.” He said “weather conditions did not affect our resolve to stop Platinex from destroying our land. Our people are still out at Nemeigusabins Lake and they will be there tomorrow and forever because this is our land.”

Councillor McKay said “We are not against mining. We had an excellent meeting with De Beers of Canada yesterday. De Beers issued a very positive Press Release. There is a right way and a wrong way of doing things. The Ontario government and Platinex need to understand that.”