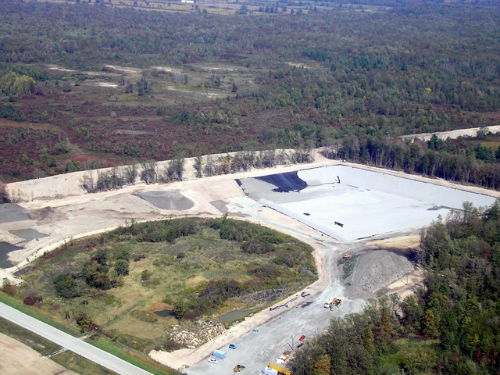 Protest at Edwards Landfill in Cayuga

Word has just come in that dump trucks have begun to arrive at the Edwards landfill just outside of Cayuga, Ontario.

Currently (as of 9:40am EDT) there are about 15 non-native supporters at the site, but more people are urgently needed. Police have reportedly threatened to arrest anyone who tries to block the trucks.

OCTOBER 8 – The protest appears to be over for the moment. More updates will follow as they become available.

OCTOBER 11 – Updates have been very hard to come by, unfortunately. Thankfully, there was one person kind enough to explain what’s going on:

“When allies and some people from Six arrived there were already four OPP vehicles on site, with more as backup. They said that anyone in cars who were blocking the trucks would be charged w/ criminal mischief, several people decided that they would block the trucks. Around 10:30 AM Wes called Brahm Rose, the receiver, who agreed to meet with Wes on the condition that we let the trucks through today with the knowledge that they would not be able to dump for several days anyways (there is a fair bit of water within the cells, and it needs to be pumped out before dumping). That’s where things stand for now…” – Megan

ALERT: October 7 Action (to stop garbage from going into the Edwards landfill)

We’ve gotten word that garbage will be brought to the Edwards Landfill site in Cayuga on Wednesday. Letters from the Hoskanigetah, the Confederacy Council and Band Council will be presented to the OPP
today in an attempt to diffuse the situation, however, there is every likelihood that the Hoskanigetah will have to take direct action to prevent the reopening of Edwards on Wednesday (tomorrow, October 7).

There is evidence of toxic waste having been illegally dumped at Edwards (as well as other sites around the region) from the now defunct Saint Lawrence resin plant. Additionally, Edwards is located in an environmentally sensitive wetlands area. Not only is it damaging to the land, there have been some very alarming indications for human health.

Contact Wes Elliot by text for specifics on the action (519 757 5427). Allies are especially encouraged to organize among themselves to come down with cars and video equipment.

Concerns about Edwards Landfill, Cayuga ON

(via www.6nsolidarity.wordpress.com) The Edwards Landfill is located in an area recognized as a significant wetland by the Ministry of Natural Resources, and is part of the North Cayuga Slough Forest and the Carolinian forest. Opened in 1959, it was zoned as a landfill prior to the creation of the Provincial Wetlands policy, and remained exempt. It was not rezoned, and retains its Certificate of Approval. Although the dump is at times dormant, it has never actually closed as per Ministry definitions.

A local Cayuga group, HALT (Haldimand Against Land Transfers), formed in 2004 to prevent the contaminated site from becoming once again active. After pursuing legal channels within the courts for four years, HALT is now working with the Hoskanigetah, a group of Haudenosaunee committed to protecting the land and upholding the Kianerekowa (the Great Law of Peace). Cayuga is adjacent to the Six Nations of the Grand River reserve, and is situated within the Haldimand Tract, land granted to Six Nations as per the Haldimand Proclamation of 1784.

In 2007 and 2008, activists from Six Nations and HALT, as well as from London, Kitchener-Waterloo, Guelph, and Hamilton worked together to turn away trucks attempting to enter the site, despite noncompliance with Ministry of Environment regulations. Current evidence suggests that there will be further attempts to reopen the site, despite its continuing toxicity. Many of the concerns stem from evidence of illegal dumping by the now defunct Saint Lawrence Resin Plant. Specifically, high incidences of livestock death have been reported on farmland bordering the site, and suspected water contamination resulting in human illness.

A “Review of 2006 Monitoring Report for Edwards Landfill” confirms that “the historic waste areas…are badly contaminated, in particular with PAHs (polynuclear aromatic hydrocarbons)”. Wilf Ruland, the professional geoscientist conducting this review, also writes that, “The existing hazardous wastes on the Edwards Landfill property pose an ongoing threat to both groundwater and surface water quality for as long as they remain on the property. These hazardous wastes have been there for decades, and I am concerned that leakage of contaminants into the local groundwater flow system has occurred…it is possible that contaminants will be spread around the site and washed off of the site into local surface water ditches during rain…this may be beginning to occur.” Wilf Ruland expresses concerns about how these issues are handled in the Annual report, and gives a series of recommendations, calling for these serious issues to be dealt with adequately and promptly.

In response to these and other concerns, The Hoskanigetah and HALT are demanding further environmental assessment and for the provincial government to take responsibility for the Edwards landfill site and to clean it up. The Hoskanigetah have recently released the following message :

“By the process of consensus, be it known that the Hoskanigetah of the Grand River have come to one mind that the contamination that came from the former Resin Plant of Cayuga is a hazard to life wherever it was illegally dumped.”

As such, the Hoskanigetah will prevent the reactivation of the site, will conduct their own environmental review, and assert their “jurisdiction and Sovereign rights confirmed, outlined, and guaranteed in perpetuity by the language of the Haldimand Proclamation of 1784, and the Two Row Wampum of 1604.” They state, “…we the Hoskanigetah will no longer endure the attempted subjugation of our responsibilities, freedoms and collective rights” when it comes to protecting the land, and maintaining the well being of future generations.

The message from the Hoskanigetah can be found in full at www.6nsolidarity.wordpress.com