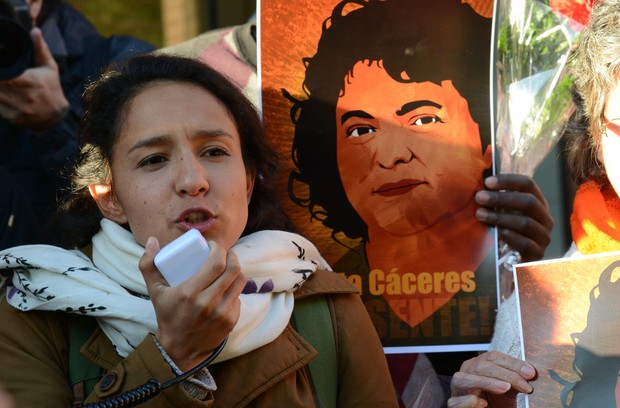 Alert! Bertha Zuniga Cáceres and members of the coordination of COPINH Attacked

On Friday, June 30th, at approximately 2:36 pm, Bertha Zúniga Cáceres, accompanied by members of the general committee of COPINH Sotero Chavarría and Asunción Martínez were on their way home after visiting the community of Cancire of the Municipality of Santiago Puringla in the department of La Paz, when they were attacked by four men wielding machetes and throwing rocks at them while they were in their vehicle.

The COPINH driver was able to escape further incident with defensive driving skills. However, a short time later, the same car, now solely occupied by the driver, found them and chased them down a road when a black car was placed in front of them to make them stop

Once again, COPINH driver was able to move quick enough to avoid a deadly crash and take a detour down another road.

These kinds of attacks are all too frequent and many times deadly. Bertha’s mother Berta Caceres, was murdered last year as a direct result of her work to bring justice to the Indigenous Peoples of Honduras. Berta Isabel Cáceres Flores was an environmental activist, indigenous leader of her people, and co-founder and coordinator of the Council of Popular and Indigenous Organizations of Honduras (COPINH).

COPINH denounced the incident, pointing to “the ambitions of members of the communities of Lomas de San Antonio and Las Delicias, supported by the intervention of the American organization USAID, to remove a source of water for the communities of San Antonio, Cancire, Higuito and Cedrito”

The Indigenous Environmental Network demands that the authorities investigate and punish these aggressions. It is the responsibility of the State of Honduras to protect the physical integrity of COPINH members and to take all necessary measures to ensure that the organization carries out its work in defense of the rights of the Lencas communities and their territories.

We call on the international community to be vigilant and demand the protection of the members of COPINH to the Honduran authorities.

Show your support for Berta!

Being an environmental leader in Honduras should not be a death sentence. #JusticeforBerta or #HR1299 support the #BertaCáceresAct ! pic.twitter.com/bTqHEtOELo

You on Twitter:
Do a video or take a picture of yourself or group with a sign in support of Berta upload on your twitter account tag us @ienearth and use hastags: #JusticeforBerta #HR1299 #BertaCáceresAct

Share Bertha, Kandi, and Josh Fox’s videos on your timelines! Always use #JusticeforBerta #HR1299 #BertaCáceresAct when you do