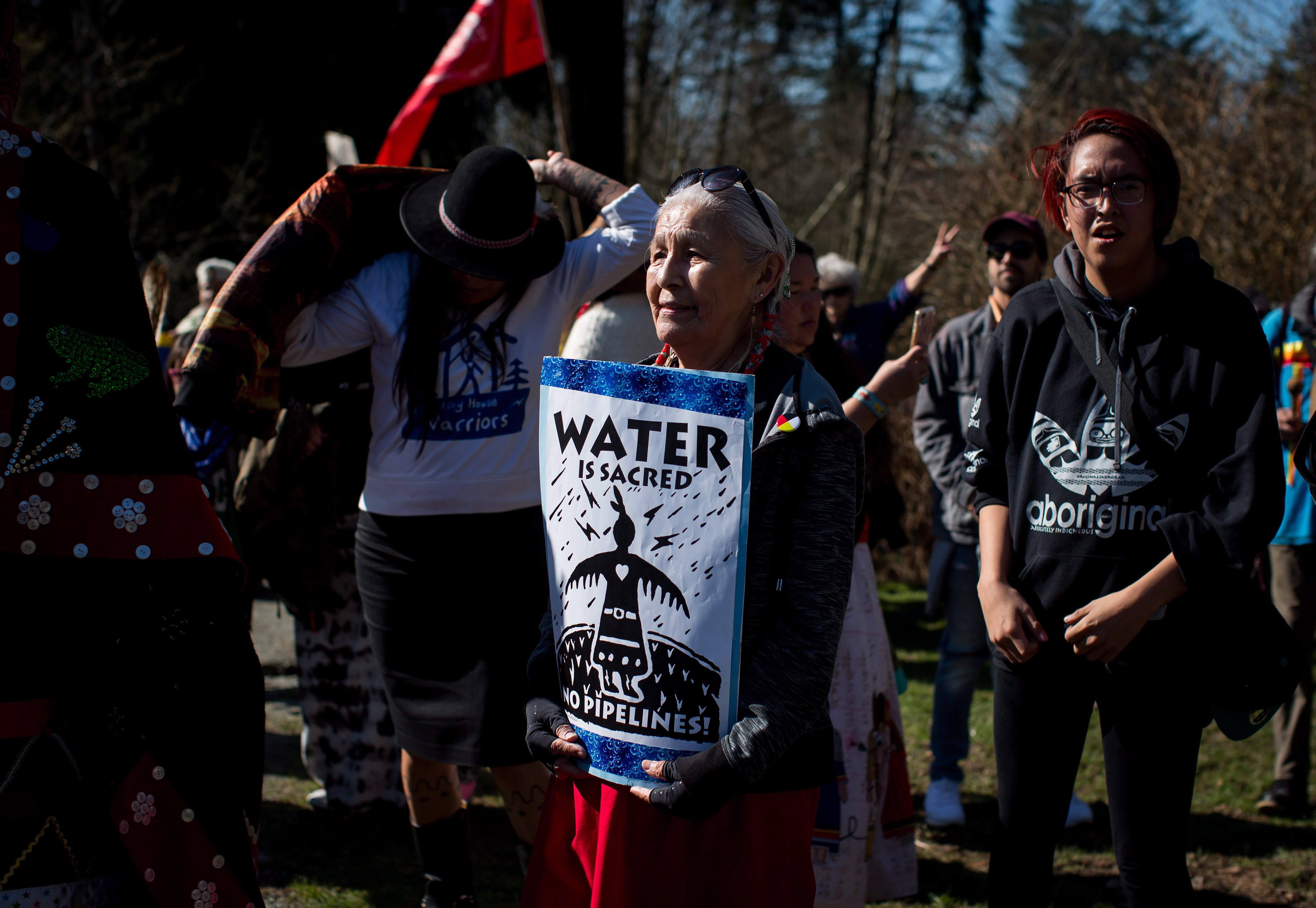 An Indigenous woman holds a sign as thousands of people attend a protest against the Kinder Morgan Trans Mountain pipeline expansion in Burnaby, B.C., on March 10, 2018. THE CANADIAN PRESS/Darryl Dyck
Support our journalism. Become a Patron!

Over the past few years, I have listened with interest to debates over moving Alberta-sourced natural resources to tidewater for export. Plans have come and, sometimes, gone.

One plan that attracts heated responses is Kinder Morgan’s Trans Mountain expansion proposal. If implemented, it would see the “twinning” of a pipeline running between Edmonton, Alberta and Burnaby, British Columbia.

Provincial governments that should be good neighbours and political allies seem like anything but these days.

Alberta’s NDP government argues that moving oilsands bitumen toward new markets is essential to maintain energy sector jobs and Canada’s economy. In its view, B.C. is violating Canadian law in obstructing a federally approved plan. Details on its perspective, and calls to action for Albertans, are on its Keep Canada Working web page.

Across the provincial border, B.C.’s NDP government appealed the National Energy Board’s approval of the project. It argued that the NEB’s ruling over-steps “federal jurisdiction over inter-provincial pipelines.”

In my own analysis, I have identified three key problems with Alberta Premier Rachel Notley’s analysis that demand attention.

Risks don’t end where the pipeline does

The pipeline itself is a big piece but only one piece of the puzzle here.

Pipelines might be safer and more efficient than other overland transportation options. That does not mean that an expanded pipeline running through an active earthquake zone would not leak.

In fact, from its beginnings in 1961 to early 2017, the existing Trans Mountain pipeline had 56 reportable spills, at least 21 of which exceeded 100 barrels.

The heightened risks accompanying an expanded pipeline would not end at the pipeline terminus. Beyond the pipeline are the ships that would transport diluted bitumen from Burnaby to be refined elsewhere before becoming available to consumers.

Those factors make transit tricky, potential damage extensive and unpredictable, and a post-spill cleanup of bitumen all but impossible.

Second, Notley frames opposition to Trans Mountain as a war on working people. She speaks about protecting “hundreds of thousands of good jobs across the country.” Those jobs are based in the energy sector across Canada, with only a portion of them in Alberta. 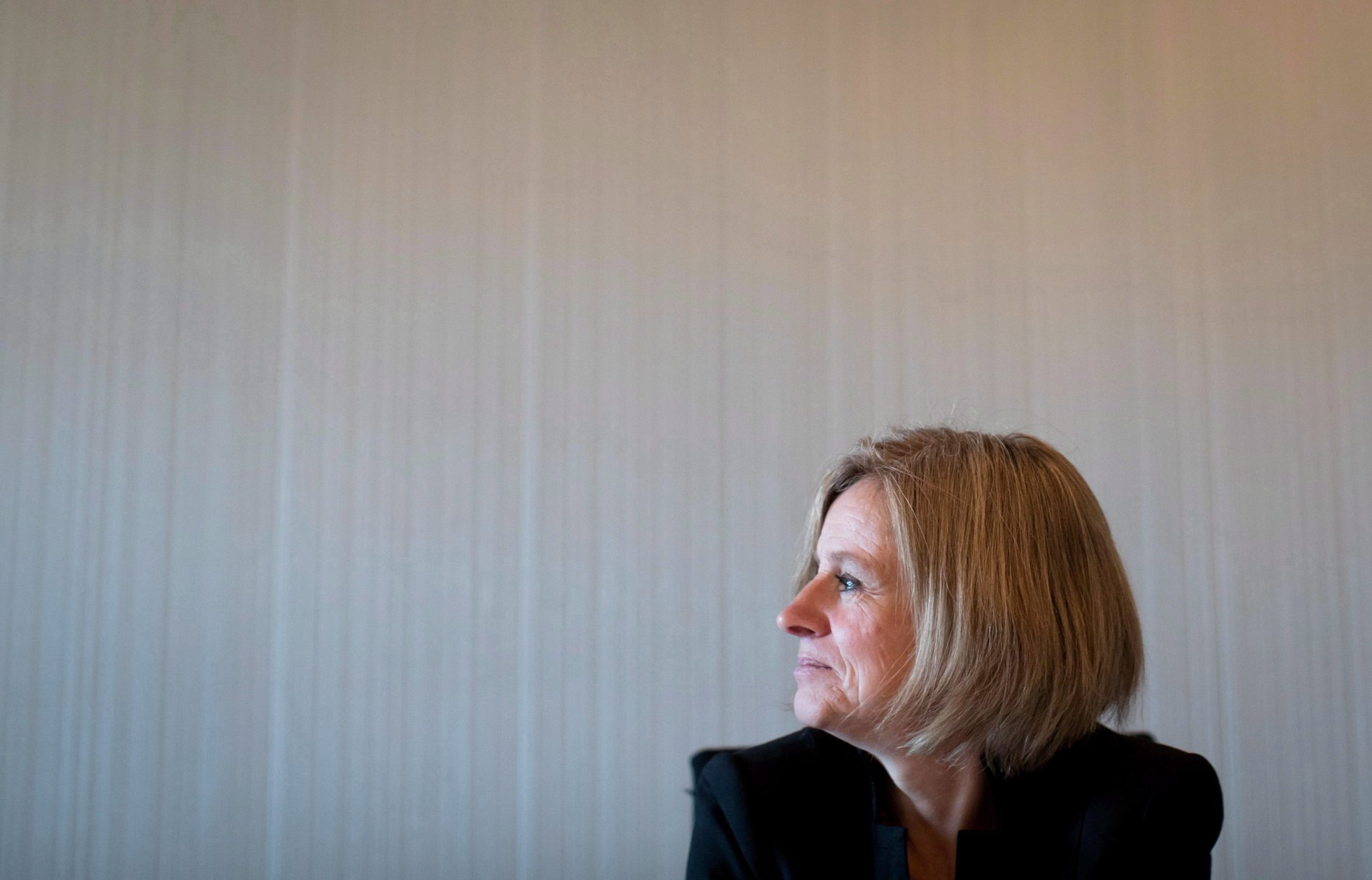 What the premier misses is the tens of thousands of jobs that employ B.C. residents in sectors like tourism and fishing. These sectors are especially vulnerable to damage caused by leaks or spills.

That explains why First Nations and other communities alongside river and ocean waters are so opposed to this project.

In B.C., fishing involves more than commercial fisheries. It is connected as well to tourism, recreation and Indigenous cultures. Good jobs are important for all people, working in all places and sectors.

Furthermore, not all people are workers. Children and elders, as well as workers — all “ordinary” people — have the right to protect “the things that matter.” People are more than their jobs, and there is more at stake here than jobs.

What about First Nations?

Third, Notley’s argument frames the dispute as not just between citizens but between governments, specifically the B.C. and Canadian governments.

Even if First Nations whose territories would be crossed by the expanded pipeline have signed onto the project, that does not mean that other Nations do not have a legitimate say in decision-making.

Indigenous opposition to this proposal involves leaders of several First Nations whose territories, cultural practices and well-being are threatened by this project.

Some of these Nations have joined together to launch court proceedings against not only the expansion but also the NEB’s process. Granted, a number of First Nations support the project, but leaders of other Nations that would face particularly high risks have laid out their case against it. Their response involves both government-to-government action and social activism.

In my scholarship on critical consumption that recognizes the costs and dangers of unbridled consumerism, I recognize social movements as sources of important learning for citizens, whether activists or spectators.

As another Indigenous scholar, Roxanne Ornelas, points out, Canada was a late signatory to the United Nations Declaration on the Rights of Indigenous Peoples.

More troubling is the reality that, in current Canadian legal frameworks and processes, Indigenous peoples can remain “left out of land management decisions that may negatively impact them until it is almost too late to respond before an action is taken.” Even engaging with First Nations, as Kinder Morgan has done, does not ensure that all First Nations’ concerns are heard and considered seriously.

Premier Notley can downplay or disregard social activism but, in identifying the governments involved in this issue, any analysis needs to include First Nations governments. Overlooking their role flies in the face of reconciliation between Indigenous and settler peoples, supposedly a top priority for all levels of government and all Canadians.

The Alberta government has gone so far as to intervene in opposition to the court case launched by seven First Nations, as well as environmental organizations and some B.C. municipalities. In her statements, Notley routinely ignores the fact that she is opposing those First Nations governments.

People might disagree over priorities and strategies, but an analysis that neglects the issues outlined above is duplicitous and cynical — exactly what we do not need to sustain a meaningful democracy and an equitable society.