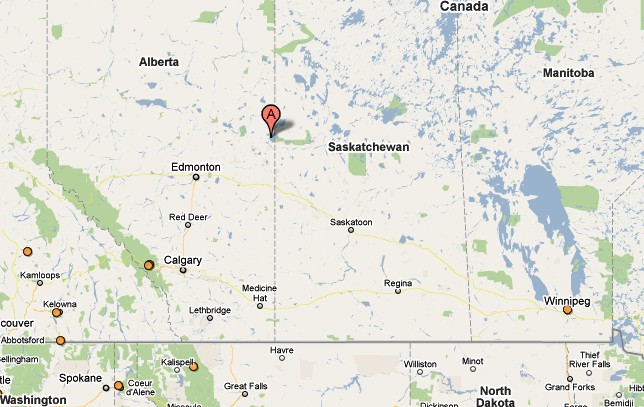 The Court of Queen’s Bench has forced the Alberta government to halt work on a campground expansion project within the Cold Lake First Nation’s (CLFN) traditional territory in northern Alberta. The ruling also brings an end to the cultural camp the Dene Nation organized on May 6, to physically prevent any work from taking place in the area.

Despite the victory, however, CLFN is asking people to continue sending letters to the government, urging them to respect Indigenous rights. Krystalline Kraus, writing for rabble.ca, reports.

The Dene Suline of Cold Lake First Nation (CLFN) Alberta have won an interim injunction to halt construction on campground improvements to be made on Sacred Land — Sacred Land that was being occupied by a “cultural camp” set up on May 6, 2011 by the Dene Suline to prevent the construction of an RV park on their traditional territory.

The interim injunction was granted by Court of Queen’s Bench Justice Don Manderscheid and will continue until the courts can hear an injunction application that was filed by the Cold Lake First Nations back on May 10, 2011. As part of the injunction, members of the cultural camp must remove all signs or blockades from the road into the campground and allow representatives of the Ministry of Tourism, Parks and Recreation to access the area.

“We’re not going to relinquish our access or our rights to this land,” said Chief Cecil Janvier. “We’re going to voice our opposition to their proposed development.”

The contested campsite in the English Bay Provincial Recreation Area, locally know as Berry Point, is on territory used by the Dene Suline for fishing, hunting and gathering medicines since time immemorial. The earth also cares for the bones of their ancestors buried in gravesites there. For these reasons, the area slated for construction holds tremendous cultural and historical significance for the CLFN.

On the location, a small campground has been operating since the 1950’s, which the Province of Alberta seeks to expand into a larger and more extensively developed campground suitable for large recreational vehicles (RVs).

The expansion project was stopped soon after it began in 2006, when historical artifacts were discovered on the land — some over 4,000 years old — which prompted a wider archaeological study of the site. The project received the go ahead again earlier this year.

While the Alberta government did perform some local consultation, it was not described as extensive or in good faith. Described by the Dene Suline community, the new construction “would include extensive surveying of the area, further removal of natural resources such as trees, plants and wildlife, the creation of a modern road into the area, large gravel pads and paths throughout the park as well as any other number of disturbances which may arise from the expansion.”

“The Province will also impose barriers upon the Dene Suline. For instance, fire bans will interfere with smoke houses; gates and fences will physically restrict Dene Suline access; and payment of fees may be required.”

CLFN has this message for its allies in the struggle to protect Indigenous Sacred land:

We the Dene Suline of Cold Lake Alberta are presently occupying a proposed provincial park on our traditional territory.

We are asking the nations for verbal support on our position. We are denying contractors and the Alberta government access to our territory.

We are protecting burial sites and many other cultural significant areas.

We may be forced by the RCMP to leave or worse.

We need our people across country to support our position.

We are being supported by CLFN chief and council

In the spirit of total resistance CLFN.”

The CLFN is asking for supporters to write letters to:

I want to register my support for the Cold Lake First Nation and their right to full consultation before any development occurs on their traditional territory. The area that the Province is seeking to develop, the English Bay Provincial Recreation Area, holds tremendous cultural and historical significance for the Cold Lake First Nation. The expansion of recreational areas is not as important as respecting the rights of First Nation peoples. Every level of government must acknowledge and protect the constitutional rights of Aboriginal peoples.

I hereby urge you as Minister of Tourism, Parks and Recreation to suspend all development of this area until proper consultation has been conducted with the Cold Lake First Nation and their concerns have been properly addressed.

Thank you for your attention in this matter and I look forward to your reply to my concerns.