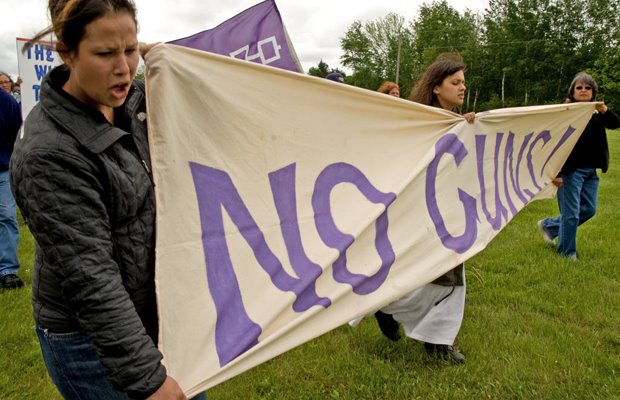 June 2, 2009 – A great deal has happened since the initial post of this article. Most critically, the police blockade was lifted and the bridge has been re-opened to the community…

In addition to the links below, you may want to keep an eye on the Six Nations Reclamation forum for future updates.

June 1, 2009 – Reports are coming in that the Mohawk community of Akwesasne has been blocked off by American and Ontario Police forces on either sides of the border, due to Mohawk defiance of the order to permit the Canadian Border Services Agency (CBSA) to carry lethal weapons on the border. The community sits between New York and Ontario, near the city of Cornwall.

For regular updates, visit http://nooneisillegal-montreal.blogspot.com. You can also contact Sandra Cuffe for updates and interviews from the community at: 514 583 6432 lavagabunda27@yahoo.es

“(The Canadian Border Service Agency) is a foreign oppressive force who occupies our sovereign community and territory. (They are) unwelcome, uninvited and now carrying firearms. For lack of a different description, that is considered by some an act of war.” – Larry King, member of the Akwesasne Mohawk Territory (quoted in the Ottawa Citizen, May 29, 2009)

A delegation of three non-native Montreal activists, including a member of No One Is Illegal-Montreal, is currently at the site of protesters at the Kawehnoke Port of Entry (Cornwall Island) on the Mohawk Territory of Akwesasne. Native protests at Akwesasne are welcoming allies to stand in solidarity, and to witness their efforts to resist the imposition of armed guards on Mohawk territory.

The No One Is Illegal-Montreal website will have updates directly from Akwesasne, as well as maintain a mainstream and alternative news compilation at this link. Read more below.

Dawn is breaking on the Mohawk Territory of Akwesasne, where local residents have protested for months to oppose the arming of Canadian Borders Services Agency (CBSA) guards on their territory. More than 50 protesters are maintaining a presence near the Canadian customs building on Cornwall Island. There are at least five fires burning to keep demonstrators warm. Many more residents and supporters are expected to be on-site as the morning progresses.

According to residents of Akwesasne (as well as mainstream media reports), CBSA border agents abandoned their posts just before midnight, out of fear of reprisals from the community. CBSA agents were due to be armed at the Port of Cornwall crossing on June 1, a policy universally opposed and condemned by the Akwesasne Mohawk Community.

Vehicular traffic onto the Seaway International Bridge has been shut down by police on both sides of the border, although pedestrians are still being allowed to access the bridge.

The Mohawk territory of Akwesasne straddles the jurisdictions of Ontario, Quebec and New York State, and is a major international border crossing between Canada and the United States. CBSA guards began arming in 2007, and there are currently more than 800 armed CBSA guards across Canada. The entire CBSA aims to be armed, in stages, by 2016. The CBSA announced that their agents at the Port of Cornwall would be armed by June 1 of this year.

Mohawk Nation News (MNN): There will be no guns! “You are on Indian Land”