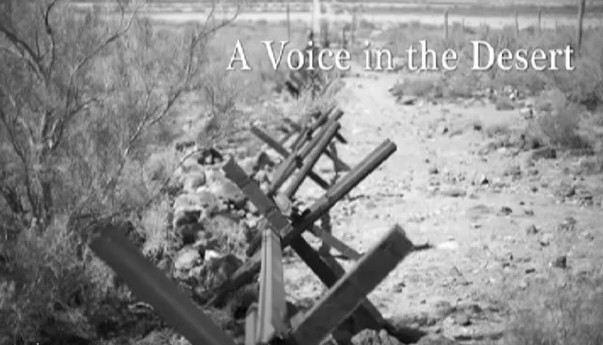 A Voice in the Desert

A film by Jason Jaacks of Cordillera Productions, A Voice in the Desert examines a cultural unity that has been interrupted, dissected and transformed by an arbitrary line: the United States/Mexico border.

Synopsis
In their own language, Tohono O’odham means Desert People. According to their history, the O’odham have called the Sonora desert home since this world began. From Phoenix to Hermosillo, the San Pedro river to the Sea of Cortez, the O’odham have lived, harvested and worshiped in the desert. Today, their homelands are divided between two political entities – the United States and Mexico. A Voice in the Desert examines a cultural unity that has been interrupted, dissected and transformed by the international boundary – an arbitrary line rendered on maps and in minds of those unfamiliar with the Sonora.

Within the United States, the O’odham live on a federally recognized reservation known as the Tohono O’odham Nation. Located in southern Arizona, it shares seventy-six miles of the international boundary. The maelstrom of increasing violence, as well as the U.S. government’s actions to secure its southern border, have stripped cultural, religious and civil rights from the O’odham. Today, their traditional way of life, the Him’dag, is under siege.

The ubiquitous presence of U.S. Border Patrol, the construction of a border wall, and the closure of ceremonial passageways have eroded at O’odham culture. Mobility and migration, integral parts of O’odham traditions, have suffered greatly under United States border policies. Many O’odham, in both countries, lack proper documentation to apply for passports – they were born at home in the desert. Without passports, the O’odham face incredible difficulties in traveling throughout their homelands and the O’odham living in Mexico have been all but severed from the tribe. For over three years, I have traveled throughout the Sonora meeting the O’odham and witnessing a people living.