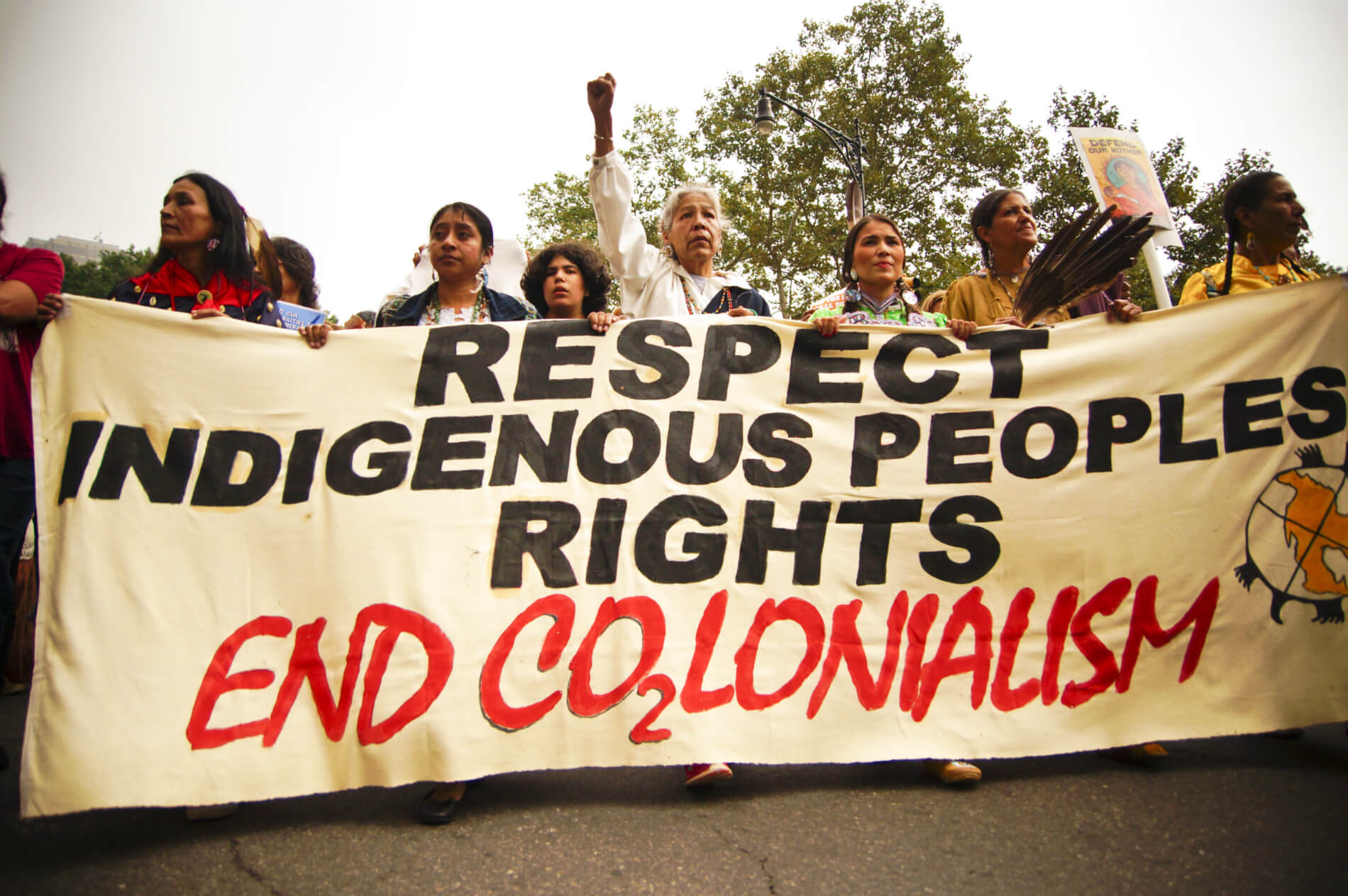 A ‘Red Deal’: Why Indigenous Communities Belong at the Center of Climate Action

"As we look forward to a cleaner economy, the Indigenous resistance throughout the world brings hope that any climate action will include Indigenous liberation." (Photo: Light Brigading/Flickr/cc)
Support our journalism. Become a Patron!

Asheninka Mino, a medicine man from the Indigenous community of Asheninka in Peru, repeated these words as we walked through the mountains of Mora, New Mexico. “To achieve peace is to achieve harmony with Pachamama (Mother Earth)—to respect it and nourish our relationship with her,” he continued.

He was teaching undocumented youth the importance of being rooted as we organize for our immigrant communities.

Every year, I have the privilege to attend the New Mexico Dream Team‘s UndocuHealing Retreat—a weekend-long retreat focused on creating space for undocumented youth to process trauma and stress through Indigenous medicine and ceremonies.

Nick Estes, in his book Our History Is The Future, notes that “these Indigenous ways of relating to human and other-than-human life exist in opposition to capitalism.” Instead, capitalism sees humans and the sacred as “labor and commodities to be bought and sold.”

And it is exactly this ideology that has displaced Indigenous communities for over 500 years.

Driven by an endless hunger for power and control, colonial empires used violence to appropriate Indigenous land for mining and labor—a process that continues up to this day. “Extractive projects materially dispossess Indigenous peoples of their lands to secure the future of the settler colonial nation,” as Philip Son wrote recently for Society and Space.

In Brazil, for example, Indigenous leader Sonia Guajajara reports that aggression by predatory agricultural companies against indigenous people there “has been getting much worse under the anti-Indigenous government of Jair Bolsonaro, who normalizes, incites, and empowers violence against the environment and against us.”

It is this same extractive economics that’s causing climate change today, leaving the Global South most vulnerable to the climate crisis. Left unchecked, the phantom dream of never-ending development will mean genocide for natural ecosystems and Indigenous nations alike.

There was an old Lakota prophecy (pdf) that “a black snake will slither across the land, destroying sacred sites and poisoning the water before destroying the earth itself.” According to Dallas Goldtooth, Keep it in the Ground Campaign Organizer for the Indigenous Environmental Network (IEN), the black snake could represent not only the pipelines constructed across Indigenous lands, but also “the sickness of capitalism” itself, which casts a “shadow upon our heart and spirit of negativity, of dysfunction, of unhealthiness.”

Global climate action is, thankfully, reaching a fever pitch. But climate policies that aren’t rooted in Indigenous communities can end up causing many of the same oppressive outcomes as extraction.

Global climate action is, thankfully, reaching a fever pitch. But climate policies that aren’t rooted in Indigenous communities can end up causing many of the same oppressive outcomes as extraction.

A great example is the United Nations REDD+ project, aimed at providing incentives to slow deforestation and to restore and conserve forests. Unfortunately, the project’s reliance on privatization has undermined these goals.

According to an informative report (pdf) by IEN, projects that privatize forests in the name of mitigating climate change, like REDD+, “have resulted in militarization, evictions, fraud, disputes, conflicts, corruption, coercion, con men, crime, plantations and 30-100 year contracts, [and] deals with oil companies and other climate criminals.”

For Indigenous groups like the autonomous Zapatista resistance movement in Mexico, Adriana Gomez Bonilla explains, the fear of climate change is not just what happens to the climate itself. It’s that climate action will become another pretext for governments to displace them from their lands in the name of conservation.

For all its other virtues, this is a weak point of the Green New Deal framework. While the plan is “anti-capitalistic in spirit” and pays “lip service to decolonization, it must go further” to ensure indigenous liberation, Nick Estes writes in a piece for Jacobin.

“The Red Deal is not a counter program of the GND,” they write. “It’s a call for action beyond the scope of the U.S. colonial state. It’s a program for Indigenous liberation, life, and land.” It pushes current climate policy work to expand, to include the demilitarization of the U.S. border, the abolishment of ICE, and decolonization of stolen land.

It also brings hope and a galvanizing energy to aim for Indigenous liberation.

This article was originally published by Common Dreams. It has been re-published at IC under a Creative Commons Attribution-Share Alike 3.0 License.