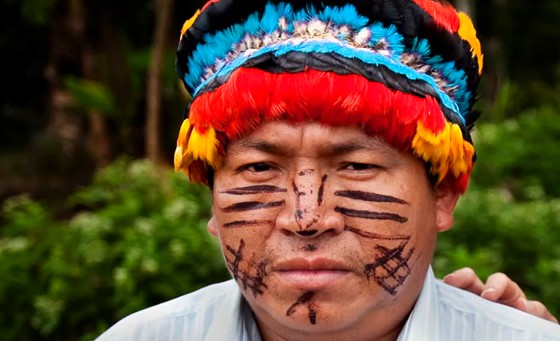 A Message of Solidarity from the Achuar to Canada

“I am very concerned I can’t stand alone in defense of my people.
We must stand together in solidarity.”
– Peas Peas Auyi

On the evening of April 10, 2013, Achuar leader Peas Peas Auyi delivered a message of gratitude to allies in Canada for their support in getting an oil company off their land.

The respected leader called up from the Amazon during Public Interest Alberta’s advocacy conference Fighting for our Future: People Power vs Corporate Control, where one of the Achuar’s closest allies, Amazon Watch, delivered a keynote about the successful campaign against Talisman Energy.

Speaking to their allies in Canada, Peas Peas Auyi stated:

“I would like to thank our allies in Canada and Public Interest Alberta for their solidarity in this struggle. Thanks to the many actions taken in defense of our territory we have achieved a great victory: a large and powerful corporation, Talisman, has been forced to leave our ancestral territory and Oil Block 64.”

He goes on to say a few words to Canada’s growing Indigenous movement:

“I fully support our indigenous brothers and sisters of Canada, who are standing up to defend their territory. Onward in your struggle!

“Even though the Achuar are far away, our hearts and our soul are with you. I will tell our people of your resistance. In the past, when our children went to war, our elders sang a song to give warriors strength. Despite our great distance we will do this same secret work so that our indigenous brothers and sisters are victorious in their struggle.

“Some day we will return to Canada, to talk in person with our indigenous brothers and sisters, and form joint plans and strategies.”

“I have been taken aback by Calgary, from our first visit with the Achuar to what appeared a cold and foreign land, to see a growing network of allies and friends who have stood with the Achuar to help their voice be heard and force Talisman Energy to leave their territory,” said Maclennan. “Theirs is a story of inspiration and hope amongst a growing indigenous movement in the north to call governments and companies to account.”

More on Fighting for our Future: People Power vs Corporate Control.