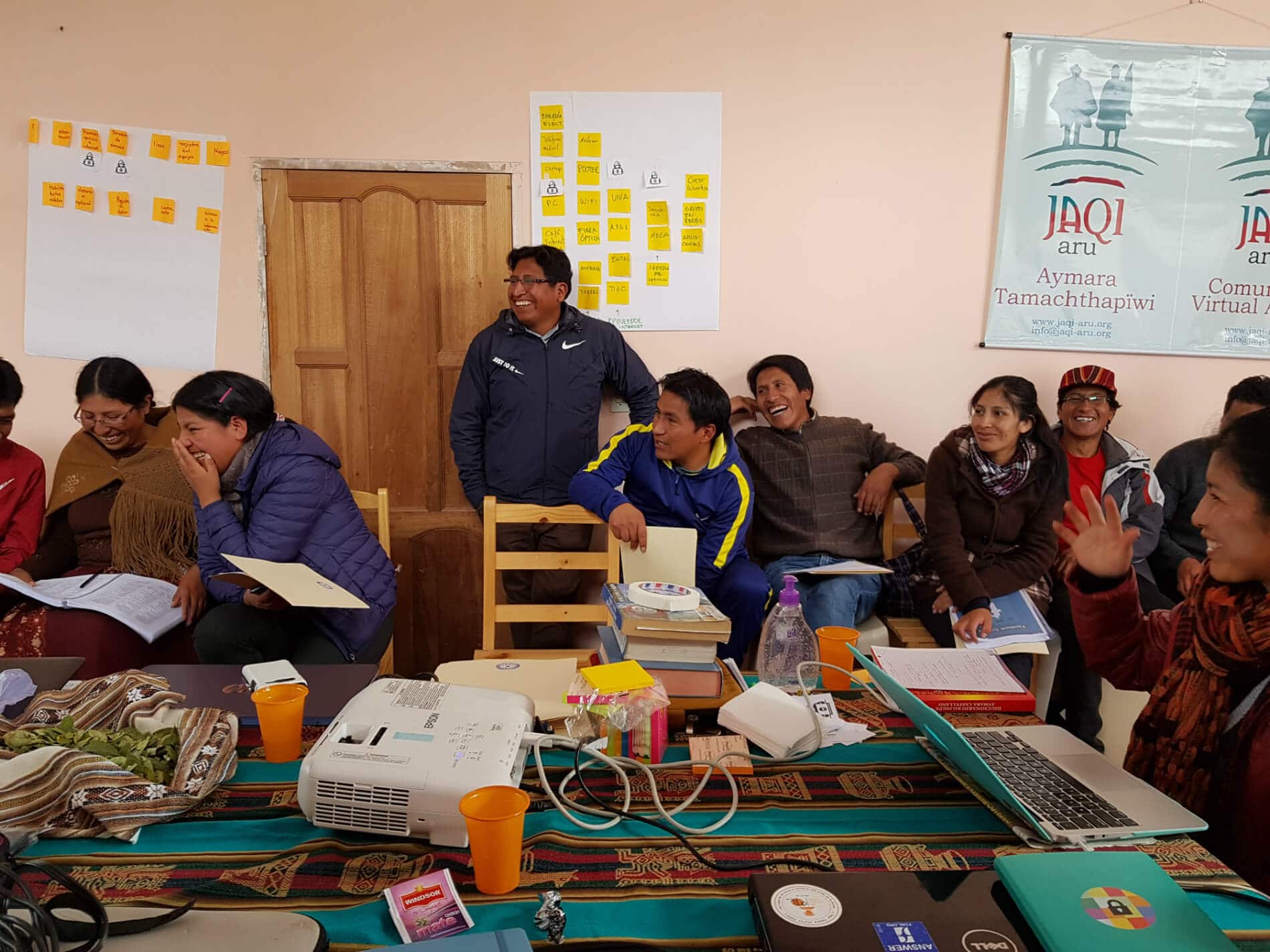 A digital security app is now available in Aymara, thanks to Bolivian language activists

Jaqi Aru means “language of the people” or “voice of the people”. Here members of Jaqi Aru collaboratively translate Orbot app into Aymara. Photo by Localization Lab.
Support our journalism. Become a Patron!

A virtual community of Aymara language activists from Bolivia has translated the digital security app Orbot in their native language in an effort to help its speakers be safer online — as well as to make their tongue better represented in cyberspace.

Orbot, a downloadable app on an Android phone, creates a private mobile internet connection by encrypting traffic and hiding it by bouncing through a series of computers around the globe, a useful function when accessing private banking information over public wifi or sending personal information online.

For the Orbot translation, Jaqi Aru had coordination help from Localization Lab, who works with such language communities around the world to make open source technology available to local audiences. For Executive Director Dragana Kaurin, translating tech is as much an issue of common sense as it is an issue of language rights. “Every Internet user needs to worry about protecting themselves online, from protecting their passwords to preventing viruses and securely surfing the web. But talking about digital security can be confusing for a lot of us, and adding a language barrier on top of that can mean preventing people from accessing much-needed technology.”

…Talking about digital security can be confusing for a lot of us, and adding a language barrier on top of that can mean preventing people from accessing much-needed technology.

Aymara is an official language of Bolivia and parts of Peru and is spoken in northern Chile and Argentina. It is one of the few indigenous languages of the Americas with more than one million speakers — yet, like many minority languages, its online representation is low.

Rubén Hilare Quispe, general secretary with Jaqi Aru, told Global Voices, “People want to know how to stay safe online, and now that we have this app in our own language, we can start teaching people how to use it.”

Aymara in the digital age

Rubén remembers a time when speaking his native language was prohibited in the classroom. “In primary school, if we spoke Aymara we would get punished. Everything had to be in Spanish.”

Many studies have attributed the high rates of school abandonment in Bolivia’s rural communities during the 1980s and 1990s to aggressive pro-Spanish language policies that alienated speakers of indigenous languages.

People want to know how to stay safe online, and now that we have this app in our own language, we can start teaching people how to use it.

Centuries of colonial rule by Spain coupled with policies that favored Spanish in educational and institutional settings led to severely marginalized indigenous communities. This meant that indigenous languages were “exiled to the home sphere” — leaving many embarrassed to speak native languages in public.

Recent changes to the education system have shifted the focus towards linguistic diversity, but speakers of indigenous languages still face disproportionate levels of discrimination in Bolivia — with serious consequences for the Aymara-speaking people.

Although nearly 17 percent of Bolivians identify as Aymara speakers, the language is considered threatened, with some estimating a 2 percent decline in the number of speakers every year.

Jaqi Aru’s language activists are working hard to reverse this trend. For Executive Director Edwin Quispe Quispe, part of the motivation behind the organization’s work draws on deeper questions of identity, language and what it means to be a member of the Aymara community.

“Almost every university and study tract includes a course on Andean culture and history. For many of us, this generates questions about our own identity. We ask ourselves: Who are we? What is our identity? […] For us, language is our identity. If we lose our language, we lose our traditions, our culture, our stories, our ancestral knowledge — we lose everything.”

As rates of Internet penetration continue to rise in different parts of the world, so does the demand for technology in diverse languages. There is a growing need for “localization“, or how a few experts call the process of adapting content to local audiences.

Naturally, companies only prioritize “localization” if benefits their bottom line — profit. Making technology available in minority languages almost never meets this standard, leaving speakers of languages like Aymara relegated to the peripheries of the Internet. Rubén says, “If a tool is developed in a certain language, then that language is given priority. This means other languages, like Aymara, aren´t represented.”

If we lose our language, we lose our traditions, our culture, our stories, our ancestral knowledge — we lose everything.

According to Kaurin, Orbot developers are working hard to make language access a priority: “The Guardian Project [developers of Orbot app] is really dedicated to making their apps available in as many languages as possible. We have been coordinating the localization of Orbot for a while, and jumped at the chance to collaborate on an event around the Aymara language.”

Digital security aside, the members of Jaqi Aru see this app as another way to make sure that Aymara stays alive, grows and gets its deserved space in the online world. When asked what it meant for his community to have an app like this in Aymara, Rubén says, “There are people who disparagingly say: What is in Aymara? [Orbot] is one of the examples of what we can do in Aymara. People will see it and say, ‘Wow! Aymara does have a place in technology.'”

This article was originally published on GlobalVoices. It has been re-published on IC under a Creative Commons License.