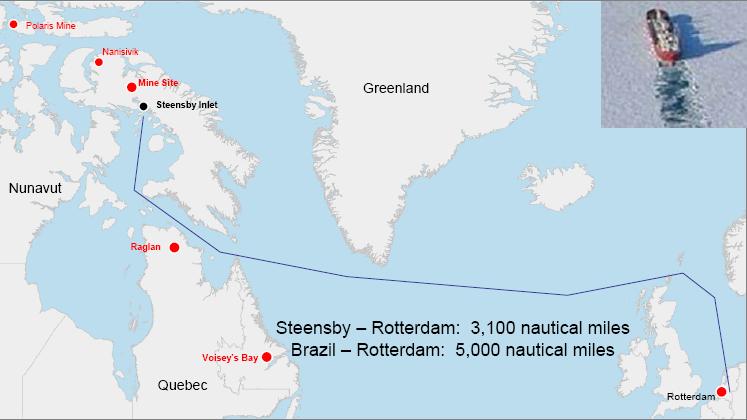 Residents of Igloolik share their views and concerns about the proposed Mary River iron ore project on Baffin Island, Nunavut.

Just north of the Arctic Circle, in an area still untouched by industrial development, a Canadian mining company is developing an open-pit iron mine.

The proposed Mary River iron ore project would be located at Mary River, on the northern end of Baffin Island. The site is thought to contain enough raw material to supply Europe with its iron needs for years to come.

The mine itself is expected to operate for at least 21 years. This would bring much-needed jobs to the region (as long as the mine operates) however, some Inuit are concerned that the project will permanently impact their culture, their traditional hunting practices, their environment and local marine wildlife.

In addition to the usual environmental impacts associated with mining, Inuit residents are worried about the plan to ship the extracted ore to Europe with the help of ice-breaking ore carriers.

Once every three days, for the entire life of the mine, the carriers would head out from the Steensby Inlet in Nunavut for a 3,100 nautical mile journey to Rotterdam, Netherlands.

The controversial course would take the carriers through Foxe Basin, preventing the Inuit from travelling across the Basin to a traditional Caribou hunting area on the west coast of Baffin Island

The constant carrier traffic may also disrupt marine mammal migration patterns and discourage Walrus herds from approaching nearby shores. In fact, the Walrus herds may decide to go somewhere else entirely.

The Inuit depend on both Caribou and Walrus for their culture and their subsistence way of life. So much so, warns
Igloolik resident Madeline Ivalu, that the Mary River iron ore project, as it stands rights now, could destroy them as a people.

“The plan consists of destroying the environment, the wildlife, therefore the Inuit.”

Despite the Inuit’s concerns–almost completely unheard of in Canada–Baffinland Iron Mines Corporation hopes to have the project up and running by 2014.

A Changing World was Produced by Arnait Video Productions and Directed by Marie-Hélène Cousineau in collaboration with Carol Kunnukis, 2010.

It is a part of a video project about the Canadian North known as “Show Me on the Map.” To learn more about the project, please visit www.showmeonthemap.net

You can find more films at http://www.isuma.tv/lo/en/members/marie-h%C3%A9l%C3%A8ne-cousineau