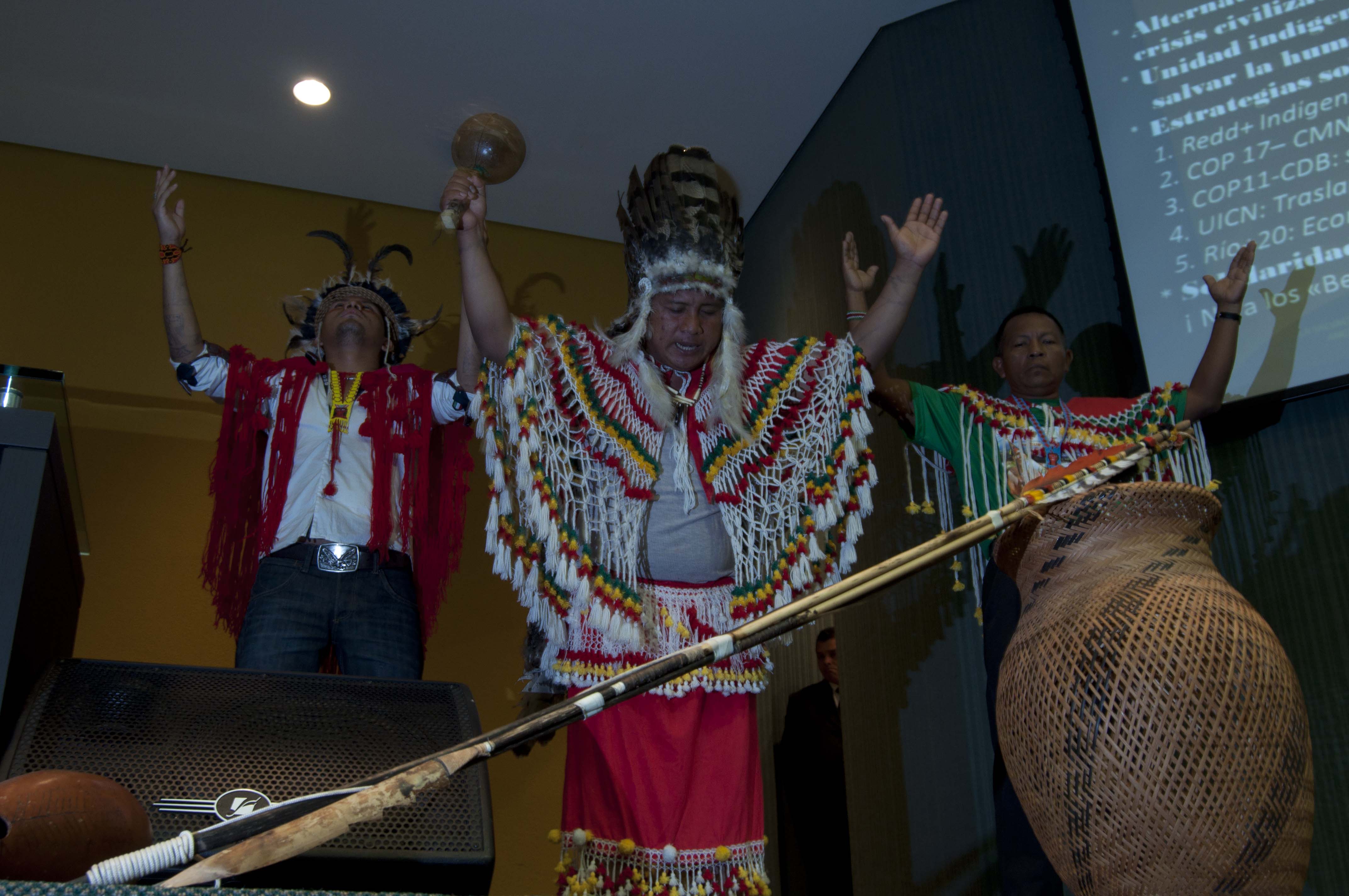 In recent weeks, Indigenous representatives from 90 organizations in the Amazon region unanimously approved a new action plan that calls for an Amazon-wide “consolidation” for the survival of ancestral knowledge and the protection of forests, water, biodiversity and the climate.

The action plan, titled, “The Manaus Mandate: Indigenous Action for Life” is the end result of the First Regional Amazonian Summit, which took place in Manaus, the capital of the Brazilian state of Amazonas, from August 15-18, 201l.

A wide range of issues were explored at the Summit including: the COP 17 meeting, to be held in December 2011 in Durban, South Africa and the Rio Conference 20 +, to be held in June 2012; The adequacy of the United Nations Declaration on the Rights of Indigenous Peoples and the implementation of the International Labour Organization (ILO) Convention No. 169; and the joint prioritization of the protection of biodiversity, genetic resources and ancestral knowledge.

Courtesy of COICA, The Manaus Mandate is now available in four different languages: Español – Português – English – Français (LAB also put together an unofficial English version, which you can access here)

We warn the world that we have passed the limits of danger of polluting gases in the atmosphere and global warming, but that’s just one of the most serious effects of deeper causes. We are in dark times of profound global climate crisis and aggression that is part of the wider crisis of a civilization and a pattern of power, based on racism, patriarchy, individualism and unbridled consumerism, commodification and privatization of everything, and the reckless arrogance of “domination” of nature are forgetting that only a small part of it.

We denounce the hypocrisy and contradiction in the global and national policies on forests, where the side of declarations, plans, small projects “sustainable” deepens predation, deforestation, degradation by mining business, oil, hydroelectric mega, ranching , soy, agribusiness, “agro-fuels” super highways of colonization, GM, pesticides, overlay of protected areas in indigenous territories, biopiracy and theft of traditional knowledge. Continuing need to improve forestry practices, it covers the best of these is profoundly change the macro policies of neoliberal globalization.

We propose the following objectives, approaches, alternatives and actions:

There is evidence that refuges of life, are the forests and Amazonian peoples’ territories as effective barriers to predation. It is therefore essential to change laws and public policies to ensure the demarcation of the territories of the indigenous Amazonian people and collective ownership as peoples, and also to support and not attack or marginalized, our strategies of “whole life” separate from the commodification of nature. This is an effective and efficient strategy to reduce global warming and restore harmony with Mother Earth, we had thousands of years. To not change the weather, change the system. It’s the system must “adapt” to the cries of Mother Nature and our children of color of the earth. The “cost” financing to solve this historic debt originated in ethnocide of colonization, it is far less than that devoted to discussions and experiments ineffective.

To those who decide on the process, “Redd +”: the United FCPF (WB-IDB), FIP, UN-REDD, UNFCCC COP17-, Rio +20 and others demand immediate assurances and conditions for the Peoples before further progress in these REDD + processes to be properly addressed:

• Respect and strengthen the proposed REDD + Indian or adequacy of the Redd + to the worldviews and collective rights of peoples, including the “Guidelines COICA on climate change and Redd +” and the proposals of the national organizations, and among other things the following:
No Territories or collective rights is unworkable Redd + * No contract community to run international rules, or the long term, giving land management or intellectual property, with more hardships than benefits, or in languages and foreign laws * Respect and support conservation holistic forest, not just where deforestation or reducing tons of carbon * Respect our proposed national regulations for Redd + and consultation and free, prior and binding * Respect reports COICA on REDD + parallel to the States * Mechanisms for resolving conflicts with guarantees of neutrality and efficiency * not support the market for carbon credits to cover the global polluters.

• Priority policies and funds for consolidation and land titling of indigenous peoples as a condition prior to move unimpeded on Redd +
• National legislative changes to strengthen collective rights in the laws of environmental services, forestry, “Redd + leakage” (mining, hydrocarbons, biofuels, etc) and consultation and consent,
• States and Banks assume their responsibility to curb the spread of scammers Redd + (“carbon cowboys,” “bubble Redd +”) by: * Registration and accreditation of international public operators Redd + * Rejection of companies and NGOs scam reported by * Recommend indigenous communities are not committing to contracts “to Redd +” or “carbon business” until the international and national regulations are specified and implemented.

3. Unity between ancestral and Survival of Biodiversity

The UN conference in June 2012 Rio de Janeiro is one of the last chances to save all life forms on the planet. Amazonian peoples to make call-Political Cultural Events in the vicinity of the official summit, leaders of people and movements, artists, scientists, intellectuals, who win public opinion and global politics. Likewise, policy intervention strategies within and outside Rio +20 Summit of peoples and building a plural and democratic, with broad public visibility. All to gain broader political support for the UN will not submit to the interests of irresponsible game of power, and advance approaches, objectives and proposals such as:

• Do not accept that the “Green Economy” is the combination of neoliberalism developed with “green projects” but a profound change in reducing consumption, waste and predation and the changing pattern of production, consumption, distribution and energy (oil, biofuels) alternatives harmony among societies, cultures and nature.
• Renovation of the Kyoto protocol, where there are firm commitments and requirements, reduction of greenhouse emissions and opportunities for participation by indigenous peoples. Do not let the world drift with powers to impose terms, how and when they reduce their emissions.
• Consolidation of the Indigenous Peoples’ land and Visions of Life Full of holistic management of nature for the “cooling” of the planet by increasing the quality of public funds to implement such global and titling.
• Establishment of an International Environmental Court, the pressing operation, independent of the global powers, with spaces for indigenous participation, the most affected by environmental crime.
• Reorganize the current UN environmental agencies not to bow to the powers pollutants, to overcome the bureaucracy and expanding opportunities for participation and advocacy for indigenous Amazonian people and the world.

Finally, the Summit raised position the media as a line of political action, not just instrumental.
To influence public policies on access to media and use of information and communication technologies and implement the proposed network of Amazon communities COICA

Indigenous peoples and the nature we’re alone, and therefore we are obliged to keep the forests standing, reduce deforestation and to be guardians of their services such as water, biodiversity, climate for the survival of life. We only ask that they let us work in peace in our mission.

No more “Belomonstruos” in Brazil, Guyana, Peru (Marañón, Pakitzapango), Bolivia and the world!
Not just above the Rio +20 Death and Life of Peoples of the Xingu!

Not on the road in Indian Isiboro Secure in Bolivia. Evo Brother defends the people and not the business of the BNDES!

Stop the destruction of oil in Ecuador (Yasuni), Peru (DATEM) and other countries!

No impositions IIRSA, as the Manta-Manaus multimodal hub that will destroy the Napo River!

Action and Solidarity with the struggles of indigenous peoples of Amazonia and the world!

Amazonian indigenous peoples, walking on the trail of our ancestors, we ask the world to open their hearts and dreams and join in the sessions for Life for All