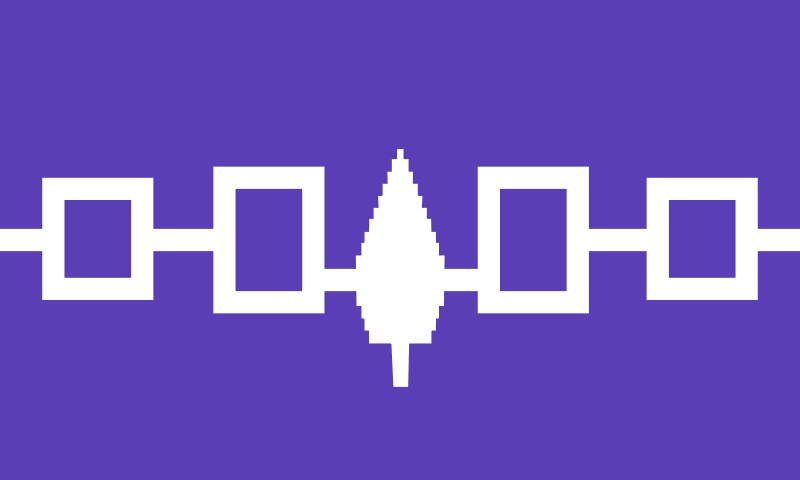 After 800 Years the Mohawk Nation at Akwesasne Endures

Official Positions within the Mohawk Nation
Support our journalism. Become a Patron!

The Mohawk Nation Council is a democratically based governing entity established over 800 years ago and is the founding member of the Six Nations Iroquois Confederacy–the Rotinosionni (in Mohawk) or the Haudenosaunee (from the Seneca dialect of Iroquois. The Council itself was created when Skennenrahowi met the Mohawks at Kahon:ios (Cohoes Falls) and convinced them to abandon their former status as a violent people and adopt the principles of the Kaiienerakowa, the Great Law of Peace. Despite centuries of attempts to subdue, remove, replace and suppress this traditional form of government by Britain, France, the US and Canada the Nation Council endures and continues to meet in session to the current day with its members speaking Kanienke (Mohawk) and taking an active part in the elaborate rituals through which the Mohawk people preserve their identity as well as their connection with the natural world.

Skennenrahowi taught the Mohawks how to govern their territory and administer to their affairs through a national council whose members were nominated by the female leaders and approved of by the citizens of the Nation. Each citizen held specific powers under the Great Law but with this came legal obligations. The members expressed their desires through their respective clans of which there were three: Bear, Wolf and Turtle with each clan subdivided into smaller units (box turtle, snapping turtle etc.) The female leaders of the clans were selected at a public assembly called for that specific purpose. Every candidate, male or female, had to meet the basic requirements as set into common law: honesty, modesty, generosity, patience, familial stability,good parent, stable partner, knowledgeable about the Nation’s politics and spiritual traditionals, intellectual clarity and tolerance. Anyone found guilty of violence, deception or greed was removed from their position.

To become a Rotiiane these steps are followed:

The National government had 45 official positions with each clan having 12 representatives made up of the following:

Faithkeepers helped maintain the spiritual well being of the Nation by setting dates for the lunar ceremonies, conducting the ceremonies and serving as counselors in all matters related to the natural world and the sacred.

Each of the three clans has a formal title for the Rotiiane. They are:

These title names were given at the time of the formation of the Nation Council. They may be dismissed by their Clanmothers (after three formal warnings) the clan or the Nation Council for acts of violence, bribery, corruption, dishonesty, neglect or drunkenness among other breaches. Once removed from office they are precluded from ever returning to a position of responsibility. A Rotiiane most visible symbol of their position is a set of deer antlers affixed to their headdress. Should they be expelled the disgrace is said to be like antlers torn from the head of a deer with the resulting wound bleeding for all time.

Such is the nature of true democracy as created by the Haudenosaunee and adopted, in part, by much of the world.