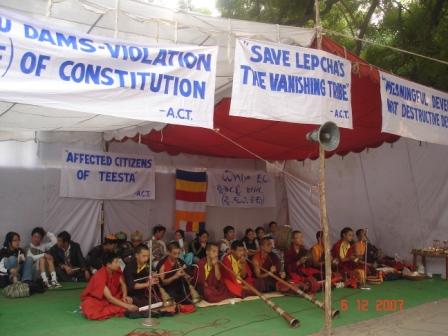 Fourty three Lepchas were arrested last week in connection to an ‘agitation’ carried out on the controversial Panan hydel power project in the Dzongu region of Sikkim, India.

The Affected Citizens of Teetsa (ACT) held a peaceful rally at the dam site on Feb. 7 to mark day 600 of their ongoing relay hunger strike against hydro development in the region.

ACT, along with pretty much the entire Lepcha population, maintain that the hydro projects will displace several villages, devastate the fragile ecology of the Khangchendzonga Biosphere Reserve, and destroy a sacred site that the Lepcha believe to be the birthplace of humanity.

All of this, coupled with a growing sense of frustration over a complete lack of action by the government, boiled into an agitation aimed at the hyrdo site. Several members walked out and began to destroy machinery and vandalize buildings in the project area.

After project developers got word of what was happening they filed an official complaint with the police, who then proceeded to sweep into several Lepcha villages and arrest every ‘suspect’ they could find.

Among the arrested were two youths, three monks, and seven women.

The group of 43 was then faced with a whopping 1,558 criminal charges in connection to the agitation, quite possibly a world record: 147 for rioting, 149 for unlawful assembly, 436 for arson and fire mischief, 379 for theft of explosives and 447 for criminal trespass.

Following the arrests, ACT demanded the unconditional release of the entire group, saying they were falsely imprisoned and subjected to torture.

The two youths were later released, however the remaining Lepchas are still in custody.

If you’d like to support the Lepcha Struggle, please take a moment to sign and spread the word about the following two petitions: