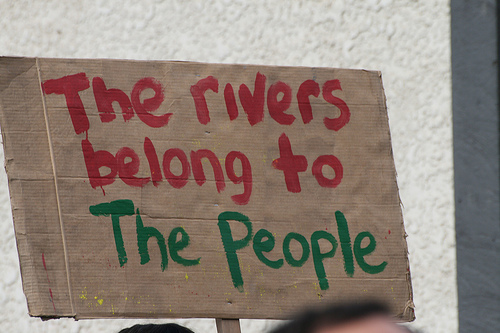 A two-year moratorium on coalbed methane drilling in the Sacred Headwaters region of northwestern British Columbia was declared last week by the Provincial government.

The announcement comes after more than four years of protest against Shell, who had hoped to drill thousands of wells in the Sacred Headwaters, the mutual birthplace of the Skeena, Nass and Stikine rivers, to extract Coalbed methane (CBM). In 2004, the BC government gave Shell mineral rights to drill in the Headwaters — however, without First Nations’ consent, or regard to any of the region’s stakeholders.

A welcomed decision by First Nations, environmental groups, commercial fisherman, and concerned citizens alike, the moratorium prevents Shell from going ahead with CBM development for at least the next two years.

“Residents from all walks of life have stated that drilling thousands of wells at the source of our wild salmon rivers is not an option. [Friday’s] announcement shows that our voices are starting to be heard,” said Shannon McPhail, Executive Director of the Skeena Watershed Conservation Coalition.

“A moratorium is the right decision because it allows all Northwest residents to come together around a vision for protecting the Sacred Headwaters,” adds Pat Moss, Coordinator of Friends of Wild Salmon.

It will also give the Tahltan, who’s led the grassroots effort to protect the Headwaters, time to properly inform themselves, as Annita McPhee, Chair of the Tahltan Central Council (TCC), points out:

“The Tahltan Nation supports responsible and sustainable development; however, we feel that CBM development is advancing without full and complete information or an established and agreed upon framework for decision-making that respects and recognizes Tahltan Title and Rights.”

“This suspension will provide our Nation the time it needs to be well informed on all issues relating to CBM. We must be fully informed of the potential challenges that come with its development to ensure they align with Tahltan laws and values.”