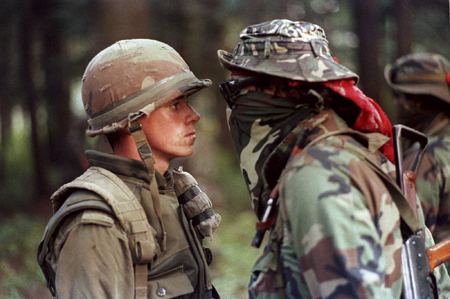 With July 11 marking the 18th anniversary of Oka, we really have to ask ourselves: does Canada want history to repeat itself?

Looking at recent events in Caledonia, Deseronto, Brantford and at the US/CAN border, it’s seems absurd to ask that question. After all, the government is doing exactly what it did in the weeks and years leading up to Oka.

There’s just no difference between then and now. They still trivialize our rights and the treaties and agreements that we have always respected. They still molest us with policies that undermine our traditions, divide our communities, extinguish our livelihoods, erode our languages, and break our families. And they still maintain a passive-aggressive climate that leaves us no choice but to defend ourselves and pursue justice using every means available to us.

In the case of Oka, the latter played out with a renewal of history, some might say — to prevent the destruction of a burial ground on Six Nations land that Canada illegally claimed for itself.

The land issue goes back to the 1700’s, but it wasn’t until 1961 that it became a major concern. A nine-hole golf course, le Club de golf d’Oka, was constructed on a portion of the land adjacent to the burial ground. Six Nations launched a legal protest against the construction; but, like with every other land dispute, Canada stalled as much as possible; giving developers time to finish their project.

Then, in 1989, the mayor of Oka announced that the rest of the land, including the burial ground, would be cleared to expand the golf course to eighteen holes. A plan to build 60 luxury condominiums was also put on the table.

Remembering all too well the way things went last time, a group of Mohawks from Kanesatake set up a blockade to stop the development… The events that followed cannot be forgotten by indigenous people.

While the Oka stand-off is long over, the core issue that led to it remain unresolved. That much can be gathered from what’s happening on Six Nations land today, and throughout the entire colonial state. For instance, the situation with the Algonquins of Barriere Lake, the ongoing Takla Lake Blockade in BC, the Mi’kmaq and Maliseet opposition to uranium mining, the recent blockade by the Kelly Lake Cree, the radar contamination issues in Mushkegowuk Territory, the plan to turn a lake on Talhtan land into a mine wast dump, the numerous lawsuits against the tar sands in Northern Alberta, and the eviction notices sent to Innu families in Labrador. This is just the tip of the iceberg…

The core issue in these situations — that is, beyond Canada’s culturally-entrenched racist attitudes — is all about jurisdiction. Our sovereign rights vs. the state’s belief that we are (fifth-class) Canadians, with no more rights than a toothbrush.

Given that fact, the question posed at the beginning of this article is a resounding YES! Of course Canada wants history to repeat! In fact, they’d just take us all out right now if they could get away with it — in the same way that our African Brothers and Sisters in the South would still be in bondage if not for those who stood up and said NO.

As for Oka, it stands today a guidepost for indigenous people now and to come. Something that taught us Onkwehonwe a valuable lesson, and which helped to start waking a sleeping giant… Something our Mayan brothers did again 4 years later, something we’re all trying to do throughout the world today.