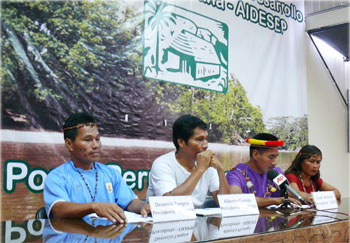 As many as 100 indigenous communities in Peru have said they will oppose attempts by the Brazilian state-owned company Petrobras to explore for oil in their territories.

Peru has reportedly given the company permission to begin exploration activities in the Amazon region, along the northern border with Ecuador and Colombia.

“Those potentially affected include thousands of Kichwas and Secoya Indians, as well as two of the world’s last uncontacted tribes,” says Survival International.

Represented by AIDESEP, Peru’s national indigenous organization, the communities released as statement on Wednesday, calling the permit “an attack against life, rivers and the environment.”

And one they will do everything in their power to stop. The statement warns that they are ready to defend their lands against any oil activities.

At a press conference the following day, a representative from the Indigenous Federation of Kichwa said: “Our children and our women are well in their communities. We do not have pollution problems. We have seen our brothers in the Rio Corrientes and do not want to suffer like that. We demand that the government should respect our territory.”

At this point, the government hasn’t even consulted them.

It’s a violation of the International Labour Organisation’s Convention 169 and the United Nation’s Declaration on Indigenous Rights, both of which the government signed in good faith.

While these agreements are not inviolable and are more voluntary agreements than actual laws, “[they do] acknowledge indigenous peoples’ rights to live in peace, with respect for their cultures and their land protected,” says Alberto Pizango Chota, the president of AIDESEP.

In the very least, the government should be able to respect them — now and any other time where Indigenous Peoples Rights and livelihoods are threatened. Not only when it’s convenient. And not because they’ll get a quick moral booster shot out of the deal, but because it’s the right thing to do. After all, this about life and death.