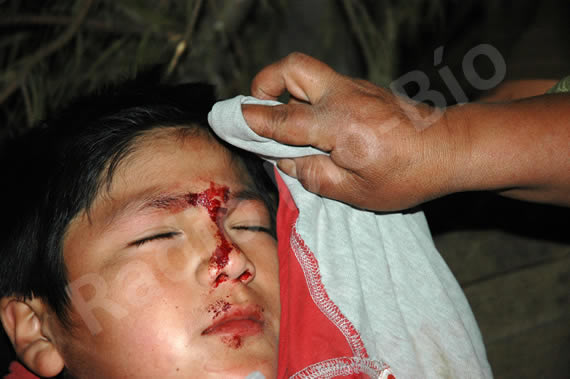 A total of nine Mapuche youths have been wounded by Chilean polices forces in the last week. Among them, Felipe Marilan Morales, age 10, who was shot in the forehead with a projectile after a failed eviction of Mapuche from the usurped La Romana estate near the Mapuche community of Temucuicui in Ercilla.

“The minor’s injury shows the excessive use of violence by officers,” says the Women’s Coordinating Committee Chile-Canada (WCCC), “considering that the minor was not even participating in the mobilization.” After being treated by doctors, Felipe explained that he was not even taking part in the Mapuche effort to reclaim the usurped land. He also demanded justice, calling for the officer responsible for the shooting to be expelled.

Responding to the attack, “The General Director of the Chilean Police Force (Carabineros), Eduardo Gordon, could only say that there would be an investigation unto the undeniable police perpetration of the shot fired. A similar position is maintained by Government Spokeperson, Carolina Tohá, who called on the investigation of the incident,” explains WCCC.

The press, on the other hand, has brushed the whole things off, labeling it a “minor incident” while just barely reporting on the other attacks.

In stark contrast to the government’s posturing and the media’s negligence, a Mapuche spokesperson has stated the police are plainly entering Mapuche lands to kill. With the August 12 murder of Weichafe (Warrior) Jaime Mendoza Collio, such thinking stands out for many Mapuche right now. Unlike Felipe Morales, Weichafe Collio was taking part in a reclamation of usurped lands, the San Sebastian estate in Angol.

The officer responsible for shooting Mendoza alleged at the time that he was “forced to defend himself” from a shotgun attack. However, it was later revealed that Weichafe Mendoza had his back turned to the officer when he was shot. He was also was unarmed.

Just 24 hours after the young Felipe Morales was shot, on October 1, 2009, police forces evicted the Mapuche taking part in the reclamation of San Sebastian. According to reports, 13 adults and 2 minors were arrested—all of them charged with the “crime of usurpation.”